This week the story pretty much remains the same at our world famous deep water locations of Corbeteña and El Banco aka The Bank. Water temperatures are strangely enough hanging in the 81 degree mark both in this area and closer in. Plenty of bait in the area, just nobody heading out this direction as the closer fishing is cheaper and more predictable. For now this area is not your best bang for your fishing dollar, this could change so keep your ears on. 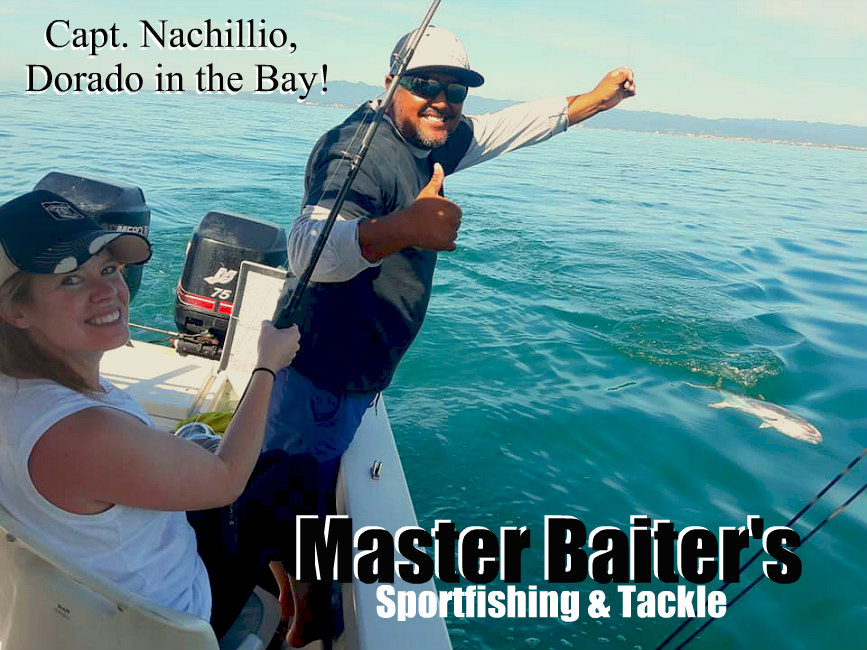 The area around Punta Mita saw an increase in Marlin action with Blues and Stripers, aka Striped Marlin hanging out no more than ten miles off the beach. Blue Marlin to 600 lbs, Possible Black Marlin at 650 lbs. Your chances for Marlin last week was at 60%. Dorado at 25 to 35 lbs. Jack Crevalls are also moving into the area around the Marietta Islands. Sailfish are picking up in numbers off the El Morro area, but again, they’re moving around so be ready to move some water, or start chasing fish, Buenos Suerte! For the guy dead set on Marlin you have to do the ten hour trip, but you’ll be heading up north past Sayulita.

This week once again inside the bay the fishing has been some of the best in season fishing I can remember. Dorado at 25 lbs and up are literally everywhere around the bay. If heading to the Los Arcos area, start dropping baits at the buoy in front of Marina Vallarta. Many a captain didn’t have to use much fuel this week to start the day off with some arm burning Spaghetti arm action! Jack Crevalls 30 to 50 lbs are moving back in the bay as they normally do at this time of the year. Great fighters and perfect for short day trips for the family and professional alike. Sierra Mackerels are smaller but taste incredible. Sailfish are off La Cruz Marina, again. Freak Wahoo are in the bay so are you feeling lucky? Just lots of action in the bay, but remember it’s Whale season, fish vacate the area where whales are around. So if you’re fishing, it’s not where you want be. Same goes for the dreaded Porpoise who do eat everything around them. Most days in the bay are great, but there are those days when all of a sudden bam, can’t buy a bite. Everyone is catching at least one fish, but that’s a worst case scenario.

With the water temperatures still at 81 degrees, it’s been fairly stable and hopefully the bait will keep the Dorado around for a few weeks more. The bite is another moving target depending on the species. Dorado and Sails are hitting around 10 a.m. so be leaving Marina Vallarta about 7:30 to get there early. Jack Crevalls have been hitting around noon, go figure. When it comes to bait in the water we’re seeing Whale food in the form of Sardines becoming massive. Skip Jack Tuna, Flying fish at 5 inches, Bullet bonito and the list goes on, no bait issues. Water conditions are mostly clean water, not so blue at times but still blue and even green is not a hindrance so don’t panic. If running lures the old reliables are a great place to start, Petroleros, Iguanas, and lure of blue and silver, they don’t work, keep changing things up until they do work!