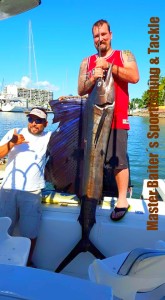 Corbeteña: Fish, fish everywhere, how you´ll get to them is another thing. Challenges abound, Flipper is stealing your bait as they laugh at you. Long lines around the rock aren´t helping. It´s disgusting but it´s what we have to deal with. So to combat this we are heading out a little farther than the rock, not too much farther. Flipper isn´t taking your baits out there. Now we´re seeing Blue, Black and Striped Marlin. Stripers are a little smaller in the 150 lb range as the Black and Blue Marlin are averaging in the 300 to 400 lb range with some larger ones chasing baits over 600 lbs, so good luck. Still worth the fuel dollar. Dorado in the 25 to 40 lb range, Wahoo in the flats around the rock, so you´ll need your electronics to find them. Yellowfin Tuna have been in the 60 lb range but again at about 150 ft down, no electronics, forget the Wahoo and Yellowfin Tuna. Plenty of fish, find the time, you´ll be glad you did. El Banco is pretty much the same. Except Long Liners have taken over the high spots.  Once past the rock of Corbeteña Capt. Cesar of Magnifico says drifting with the currents with free swimming baits are working very well for Marlin, but keep this to yourself, it´s our secret! 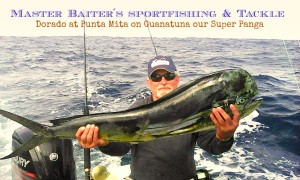 The Marietta Islands have been pretty much dead all summer, they´re a little better now. Some smaller Sailfish, some Dorado in the 25 lb range. Bonito to 30 lbs, Skip Jack Tuna around 6 lbs, basically bait. Jack Crevalls upwards from 35 lbs, Sierra Mackerals in the 10 to 15 lb range. Rooster fish are coming in, but they´re only 10 lbs, nothing to get excited about as yet, but this could change rapidly as Sardines are moving in again. But if you´re at the point of Punta Mita you have an excellent shot at larger Dorado to 45 lbs, Sailfish of nice size, maybe six feet long and 90 lbs. Striped Marlin are all around the area about ten miles off the point. Sayulita or Anclote Reef is also seeing smaller Rooster fish and well and this could improve in the near future so stay tuned. 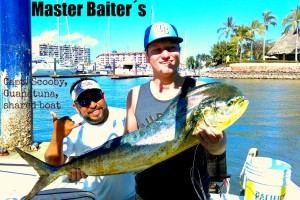 Inside the bay we´re seeing winter fishing with a twist. Sailfish are still being boated, but they´re babies and should be thrown back. These Sailfish are only three to four feet long, but they´re taking baits off Los Arcos rocks. Jack Crevalls averaging 35 lbs around Nuevo Vallarta and all areas in between. Fishing in the bay is actually great with Sierra Mackerals of the average size of ten pounds and they´re great tasting. Needle Fish are spreading out a little and fun to catch, but they´re a weird looking fish for sure but great tasting. Don´t be surprised if the captain gives you a bunch of tubular looking fish to take to Victors Café Te Cuba to be prepared. Did I say they´re good tasting?

Like I mentioned earlier the fishing is great as long as you can find a way around the long liners. They spread their lines around the whole area.. Miles long, baited hooks, I´d like to know why the authorities ignore this, then again it´s not hard to figure out. For now don´t let this keep you from going out, you´ll catch fish, we just have to fish around these lines and use the expertise you´re paying for. So the radio thing is a help and a hindrance, what would you do. I am about ready to start using smoke signals!! 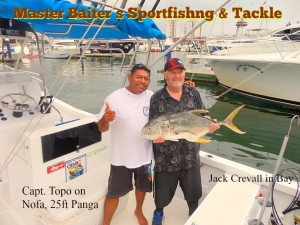 Water temperatures are still hovering around 80 degrees and this is a result of El Nino, we aren´t complaining. We could have summer type species into March and April, we´ll just have to see what happens. High Visibility blue water and plenty of Bullet or baby Bonito and Skip jack tuna insure fish will be around for a while. But remember one day they´re here, then next they´re somewhere else. We always start where they were yesterday, and then go from there. With the Corbeteña Flipper eating your bait issue, lures are doing the trick for Marlin, Dorado, Sails and even Wahoo. But with Wahoo you need wire leader, which excludes other species, so good luck. It´s tough to lose lures to these razor mouthed beauties, but there you are! The bite is a little later, but I suggest being where you want to be before 8:00 a.m. to be sure to catch the morning bite. The late bite we´re having is around 3:00 p.m. so if leaving later in the morning, then hand in the afternoon for good luck. Lures as mentioned are working well around Corbeteña, use Petrelaros of green, brown and purple. For Marlin and Dorado blue upper with white dots and pink lower skirts will do the trick, well for today anyway. Having the correct equipment and electronics right now will make the difference in catching and wanting! 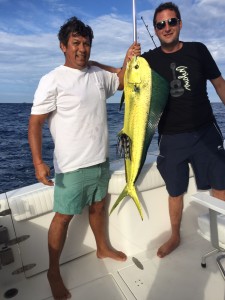 Shared boats for 8 hrs targeting Dorado has been very popular! Just fire me an email so I know when you´ll be here and we´ll do the rest. The Downtown Store on Basidillo Badillo and Insurgentes is open for High Season. Call Chris (El Centro Mgr) at (044) 322 112 9558 for fishing, tours or T-shrts amigo.  I am still in Marina Vallarta so take your pick. YeHa!