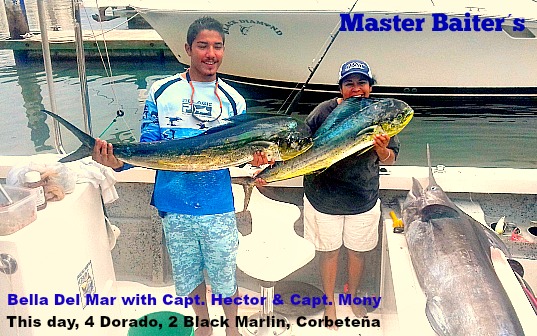 In the world of Deep Sea Fishing the only ¨constant¨ is that nothing stays the same for long. With a drastic drop in water temperatures last week I thought we had seen the best fishing fade away for the rest of the year. Then the Illegal Long Liners bugged out, and the fishing improved greatly. Water temperatures are still at 80 degrees which I would say is cold for these warm water species, but in San Diego where the water temps are considerably colder they´re still boating Marlin and Dorado. So what does this all mean? Your guess is as good as mine, but if they´re   ¨playing¨  in colder water up north that means the season if far from over for Marlin, Sailfish, Dorado and we even have Wahoo in the area. Now if we could find a way to coax a Yellowfin Tuna in the area we´d be happy campers!

Punta Mita:  Dorado in the 30 – 40 lb range are chasing anything that looks like bait. Sailfish in the 90 lb range are moving in nicely as well. Eight to twelve miles off the point you´ll find Blue Marlin in the 400 to 600 lb range. Now I´m not going to say it´s easy, it will be work, but they´re out there and we´re happy about that! You´ll want to make sure you´re running some green and black lures with live bait, this will hopefully give you a bit of an edge out there. High visibility blue water everywhere and plenty of bait in the area only improves your chances for some arm burning action, Buenos suerte or good luck in English. 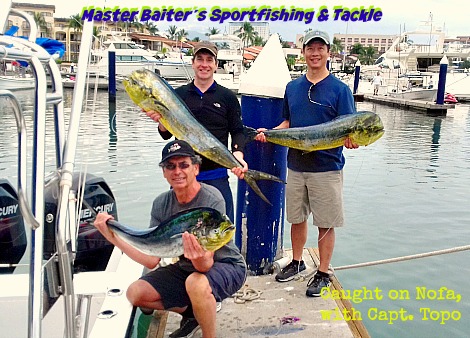 The Marietta Islands this week was weak at best. This area is normally a fish producing machine. Rooster fish at 45 lbs were in for a few days and then they disappeared unexpectedly. Frankly I am surprised we haven´t seen more of this species this year. Some Dorado at 30 lbs are around the Island with no guarantees to be there when you arrive. So call me and I´ll let them know you´re coming. The normal players like Bonito to 40 lbs, Jack Crevalls in the 35 to 50 lb range, Sierra Mackerals, Skip Jack Tuna and the list goes on. Not really enough of a reason to head to this area for sure.

Corbeteña: Those pesky Bottle Nose Dolphin are still hanging out around the rock.  So this exact area is a headache as Flipper eats your baits up to the hook as they laugh at you ¨flipping out¨. Five miles off the rock these Dolphin aren´t anywhere to be found which means you can actually get a bait in front of a Gamefish. Blue Marlin at 600 lbs are not exactly abundant, but they´re available and looking for a quick meal. Dorado to 50 lbs are back as well. Sailfish in decent size range, Jack Crevalls of course. We´ve seen some Yellowfin Tuna in the 40 lb range, we commonly call them ¨footballs¨ and they´re great tasting. Not sure I´d head in this area for a forty pound Tuna, but the Marlin, Sailfish and especially 50 lb Dorado should be reason enough to hit this world famous fishing area. Oh, Wahoo also, this Ginsu knife mouth fish is a lucky catch. I´ve seen them bite through wire leader so good luck!

El Banco is hot and mostly cold this past week. We´ve seen some days when we had Marlin (500 lbs) and Dorado (50 lbs) just to find nothing and I mean nothing the next day. The closer you get to the Tres Maria Islands the better your chances get to boating a world class gamefish. You´ll find a better bang for your fishing buck at Corbeteña. This could all change tomorrow, stay tuned! 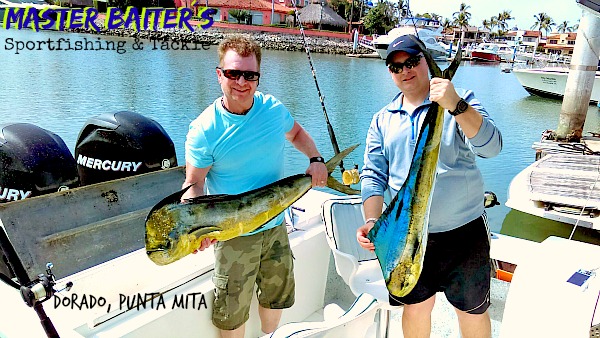 Inside the bay: Dorado have moved back into the bay making day trips a thing of beauty. Cheap on the vacation budget with plenty of action you can´t go wrong. Unless you´re looking for Moby Dick, the bay is where you want to be. We´ve seen more Sailfish in smaller size ranges in front of the Los Arcos Rocks and in La Cruz. I can only blame El Nino for these strange occurrences that are becoming normal. Dorado in the 25 to 30 lb range. Skip Jack Tuna, Bonito to 40 lbs, Jack Crevalls to 50 lbs with the average being around 30 lbs in Nuevo Vallarta waters. Throw in Sierra Mackerals and some larger Needle fish of 40 lbs and you won´t go wrong. If you do boat a Sailfish, you should jump a plane to Vegas because you are one lucky chili pepper!

Water Temperatures are down to 80 degrees which looks to be warm enough for now. The bite is in the early hours of the day, the full moon is doing its thing again. Lures are working pretty well for some reason, Tuna lures of Blue and gold are working very well for Marlin and as mentioned earlier Green / Black are working also.

Don’t forget we´re still doing our best to hook you up on shared boats, just fire me an email so I know when you´ll be here and we´ll do the rest. The Downtown Store on Basidillo Badillo and Insurgentes is open for High Season. Call Chris (El Centro Mgr) at (044) 322 112 9558 for fishing, tours or T-shrts amigo.  I am still in Marina Vallarta so take your pick. YeHa!