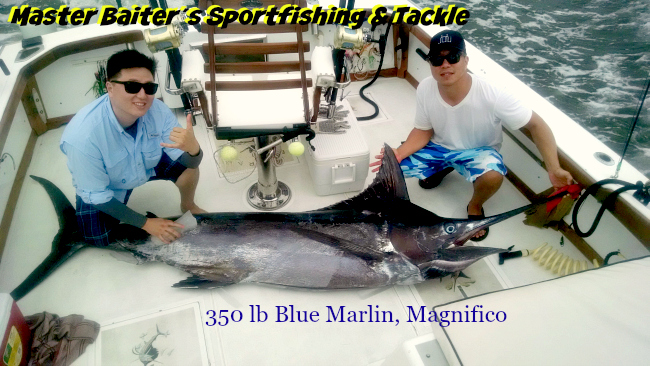 Summer fishing is shaping up nicely as we see Striped, Blue and Black Marlin numbers increase. Sailfish are more abundant in a big way. Bullet Bonito and Skip Jacks are all over the place being chased by these World Class Gamefish. Water temperatures are perfect for summer species.  Dorado are trickling in slowly. We´re not seeing larger Yellowfin Tuna yet, it´s still early for them around Corbeteña or El Banco. The season is coming together, time to start making those summer fishing trip reservations and keep up with these Fishing Reports, Fishing High Season is starting now!

We have started to see the Hurricane Season get underway as we´ve already had two hurricanes and a third is on its way. Normally these summer blows are so far out to sea that we may see rain, maybe some swells eventually. It all depends on the energy path and of course we follow this sort of thing so clients don´t get unwelcome surprises on their quest for a Finned Fantasy. Water temperatures are in the 83 to 85 degree range depending on where you are. Bait is wildly abundant with Skip Jack Tuna Bullets or Baby Skip jack Tuna and Bullet Bonito bait. Google Eyes are plentiful as are other baits, but these are the ones being chased.

The area between El Morro and Corbeteña has been the strongest location to find Sailfish the last few days. Draw a line to Corbeteña from El Morro then follow that line to the south by about four to ten miles and you´ll find Sailfish on tap. I probably shouldn’t say ¨on tap¨ since they´re chasing those Bullet baits and they´re moving fast. Once you´re around Corbeteña and you haven´t seen Sailfish turn north and head in the direction of El Banco, you´ll find Sailfish. The big issue with these fish are they´re moving quickly all over the place. Talking about Corbeteña we´ve got Cubera Snappers running 40 to 50 lbs and taking surface trolled baits. Black and Blue Marlin are in the 300 to 550 lb range right now with good sized Striped Marlin in the 250 lb range. Wahoo possibilities for the lucky. Not too many Football Tuna around, but this can change in a heartbeat. One down side has been Bottle Nose Dolphin everywhere. Fun to be around, fun to watch, but they will eat your bait right up to the hook, so they´re causing havoc. Large amounts of Dolphin like this find your trolled bait the equivalent of a ¨Hot Dog on a Stick¨!  Conditions are perfect, just be sure to keep an eye on sea conditions.

El Banco, well if you´re looking for Football Tuna, all you´ll find at this time of the year will be mostly Football Tuna 40 to 60lbs, Small Yellowfin Tuna around the area. Sailfish are off the hook here, not surprising, they´re all over the place, but there is super abundant bait here, explains things. Wahoo in the 60 lb range have been boated here as well on Monofilament line, very lucky. So they´re out there but hard to target this species since they´re non-schooling.  Marlin move also so even if they aren´t there now, they could be there tomorrow, anything is possible. Cubera Snappers are here as well. Fields of Google Eyes and Bullet baits, the world is fish perfect here for now. If you´re looking to boat any Tuna, you better be at the fishing grounds at sun-up, they won´t hit for the rest of the day for now, so target Sails, hope for Marlin, take the Cuberas. 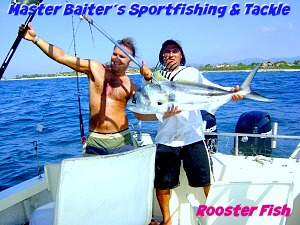 El Morro / Marietta islands are seeing some Rooster fish in the 40 lb range being boated if you´re running Bullet baits. Small Dorado are starting to filter in under 20 lbs, Bonito in the 30 to 40 lb range, Sailfish possibilities, Some Jack Crevalls in the 40 lb range. Jack Crevalls are beginning to thin out as they´re a winter species for the most part in normal years. Sierra Mackerals are leaving as well. We´re still in a transition period, but we´re catching fish so who`s complaining?

Punta Mita, still a great option, Rooster fish 30 to 40 lbs around the beaches and reefs. Dorado around the Buoys if you can find them. Sailfish possibilities about ten miles off the point.  Abundant bait, Skip Jack Tuna, Bonito, Snappers are filtering out but still in the 30 lb range. It´s great fishing in the area and well worth your fuel dollar! 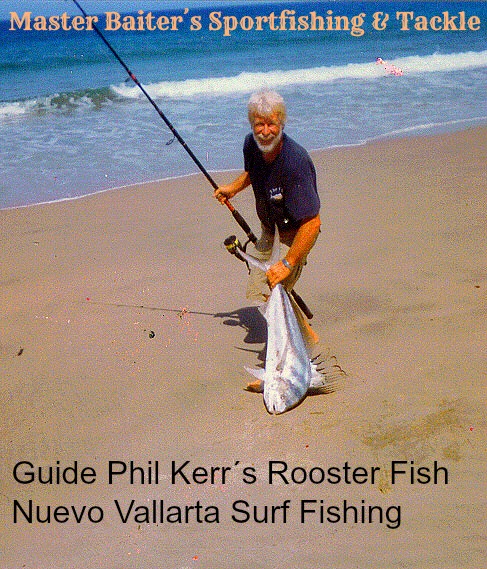 Inside the bay is great small species fishing. Bonito to 30lbs, Dorado in the 15 lb range around the Punta Negra area (Garza Blanca for the surf fishing guys), Billions of fun to catch Skip jack Tuna everywhere in the 20 lb range. The few remaining jack Crevalls at 35 lbs are still around the Nuevo Vallarta area. Sierra Mackerals are all but gone but we should start seeing Needle fish move in. We have seen some Football Tuna as we will around the Las Animas area.

As I mentioned about the bite for Yellowfin Tuna, it´s early since we´re looking at full moon conditions. The bite always moves early for YF Tuna when the moon if full. Sailfish and Marlin are hitting later in the morning and Afternoon, seems just the Tuna are on this schedule. Water temperatures have risen to summer levels, perfect for all the Summer Species as they begin to move in nicely. Water is a dark blue with plenty of visibility. All and All things are as they should be for this time of the year. Soon we´ll get the summer rains which brings the Trash Line and that draws fish, especially Dorado into the area! Snook will be at the river mouths as some are already there with all the rain inland they´re feeding off the organic stuff the love so much. We have seen some rain in the Puerto Vallarta area, this is expected but it´s not a nightly thing as in summer quite as yet.

Something to remember, fishing in Puerto Vallarta in the coming months many times is not for the ¨perfect conditions¨ types or I’m not going fishing ¨person¨. Rain can be almost expected daily in the late afternoons, but sometimes in the morning hours. Rain in the morning is no excuse for a refund, fishing happens rain or shine. When there is lightening it´s not a good idea to be on the water with a ¨lightening rod¨ in your hands. But if it´s raining it´s the best time to be on the water. Now the tropical rains are mostly warm, so standing with a pole in your hand in the rain as you hear screaming reels, well that´s just part of the game. If you´re looking for perfection, remember it doesn´t exist if you´re not the ¨big guy¨.  Fish get excited as rain drops hit the water surface, they react as if they were waiting for bait to re-enter the water. Talk about a frustration dream, but we use that information to our advantage. The rain is your fishing friend, we´re not talking storms now, so keep things in perspective.

If you´re going to run a lure as I suggest use the colors of Green / Orange, commonly called Guacamayos like the Parrot breed. If in the bay and you find Skip Jack Tuna, they´re hitting anything, feathers, poppers, spinners, just get something in front of them and they’ll take it.