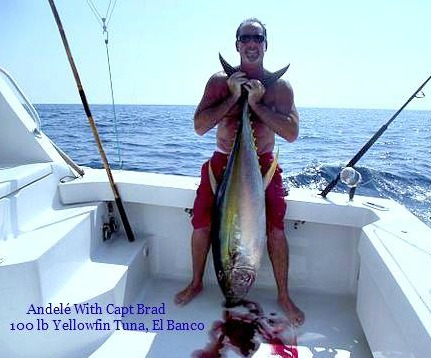 After living and playing in Puerto Vallarta now for about fourteen years, I have come to expect certain things from Mother Nature regarding fishing. We expect to see Dorado at this time of the year, Marlin and Yellowfin Tuna also. Sailfish are turning into a year round species for those willing to go the distance and have the time. Normally by the end of August we see the fishing kick in gear and frankly we´re looking forward to the next few weeks. Marlin are still the primary player at our world famous fishing grounds of Corbeteña and The Bank, El Banco in Spanish. In many, I should say most ways the fishing conditions are much the same as last week. So this may sound a little ¨cookie cutter-ish¨, but things can change slowly when your eye is on the calendar. But don´t fret amigo, the fishing is great and any thoughts that fishing here in Puerto Vallarta is anything less than great should be cast from your mind and insert a mental picture of a 700 lb Black Marlin. If that doesn´t work, I put one in this REEL TIME report, just to get you thinking about the possibility of you boating a monster fish and crossing another thing off your bucket list.

Now that we´re in August, the weather or temperatures I should say are about as hot as they´re going to get. If you are in Houston or Florida, or many places in the USA you´re experiencing the same sort of conditions. Here in Puerto Vallarta (PV) we´re used to the humidity, the warm days and the tropical nights. For the fisherman in the family this is the best time of the year to be fishing here bringing with it a chance to boat a world class and maybe world record sized fish. This is more than just talk amigo. 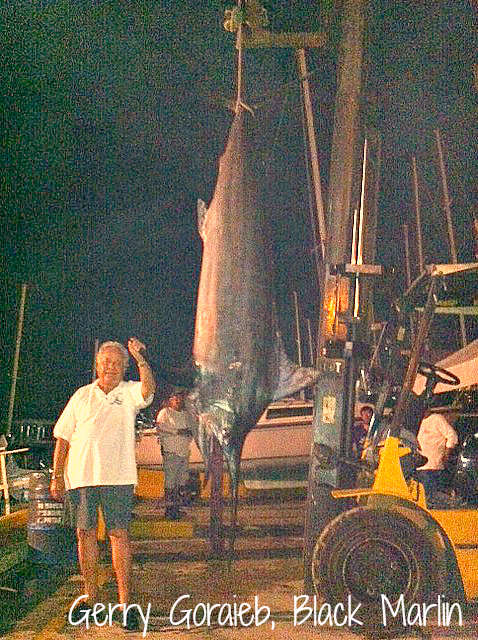 Having said that, Yellowfin Tuna of size have finally shown up at Corbeteña running anywhere from 80 to 150 lbs and it´s about time they appeared. But it´s not unusual to find them showing up at the middle to end August. But wait, that´s not all folks, those with the means are also catching Sailfish, Marlin in the 400 to 700 lb range, Cubera Snappers to 60 lbs, Rainbow runners to 45 lbs and that ain´t bad!

If that isn´t enough for you, then El Banco is sporting some super sized Marlin in excess of 700 lbs. No Yellowfin Tuna as yet, but they´re coming shortly. Sailfish are also a dominant player in the area and frankly anything is possible as far as species showing up unexpected. I am looking forward to being surprised that Large Dorado have moved in, don´t get excited, they´re not here as yet in any real size.

Marietta Islands, it´s very strange and disappointing that the Marietta’s are just flat when it comes to fishing. Bonito in the 25 lb range, Needle fish running 30 lbs, Skip Jack Tuna in the same size ranges and that is about it. Sailfish are off El Morro a ways south of the Marietta Islands, but this is what it´s like out there for the moment. We`re expecting to see Dorado begin to turn up shortly with recent current and perfect conditions, so stay tuned. 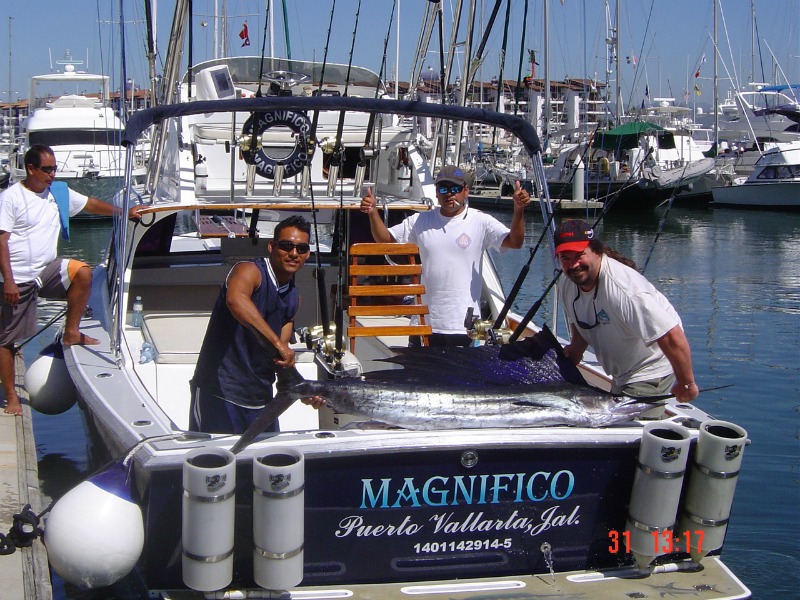 The point off Punta Mita is still the place to be for the most part if looking for a shorter day where Marlin is not being targeted. Sailfish in tournament winning sizes are still living large. Some days the Sailfish are just five to ten miles off the point to some days where they´re twenty five miles out, but they´re there and that is all we can ask for. You also have a shot at a Blue Marlin if they´re closer in, stranger things have happened. Great location, great fishing in an 8 hr fishing day.

Now that we´re in August, the weather or temperatures I should say are about as hot as they´re going to get. If you are in Houston or Florida, or many places in the USA you´re experiencing the same sort of conditions. Here in Puerto Vallarta (PV) we´re used to the humidity, the warm days and the tropical nights. For the fisherman in the family this is the best time of the year to be fishing here bringing with it a chance to boat a world class and maybe world record sized fish. This is more than just talk amigo.

Inside the bay has snapped back with all the rains we´ve had, which of course means the Trash Line is doing its job attracting smaller fish which in turn attracts larger fish. With several rivers emptying into the Bay of Banderas we have plenty of trash line locations to choose from, one is near you now. You know, we´ve seen some really strange stuff in the bay, Sailfish were being boated off the rocks at Los Arcos. Sailfish have also been boated off the Marina at La Cruz. Jack Crevalls, even being a winter species is all over the bay in fairly large sizes of 35 to 45 lbs. Arm burners for sure you´ll find a short day with these fish satisfying and fun. Needle fish of 25 lbs, Bonito at 15 to30 lbs, Sierra Mackerals and I have to say it, Sailfish for the lucky few that are here to take advantage of their unusual presence. Yellowfin Tuna can also be found around the Yelapa area and can run up to 50 lbs. So the bay is a great option, short days, plenty of action and perfect conditions. 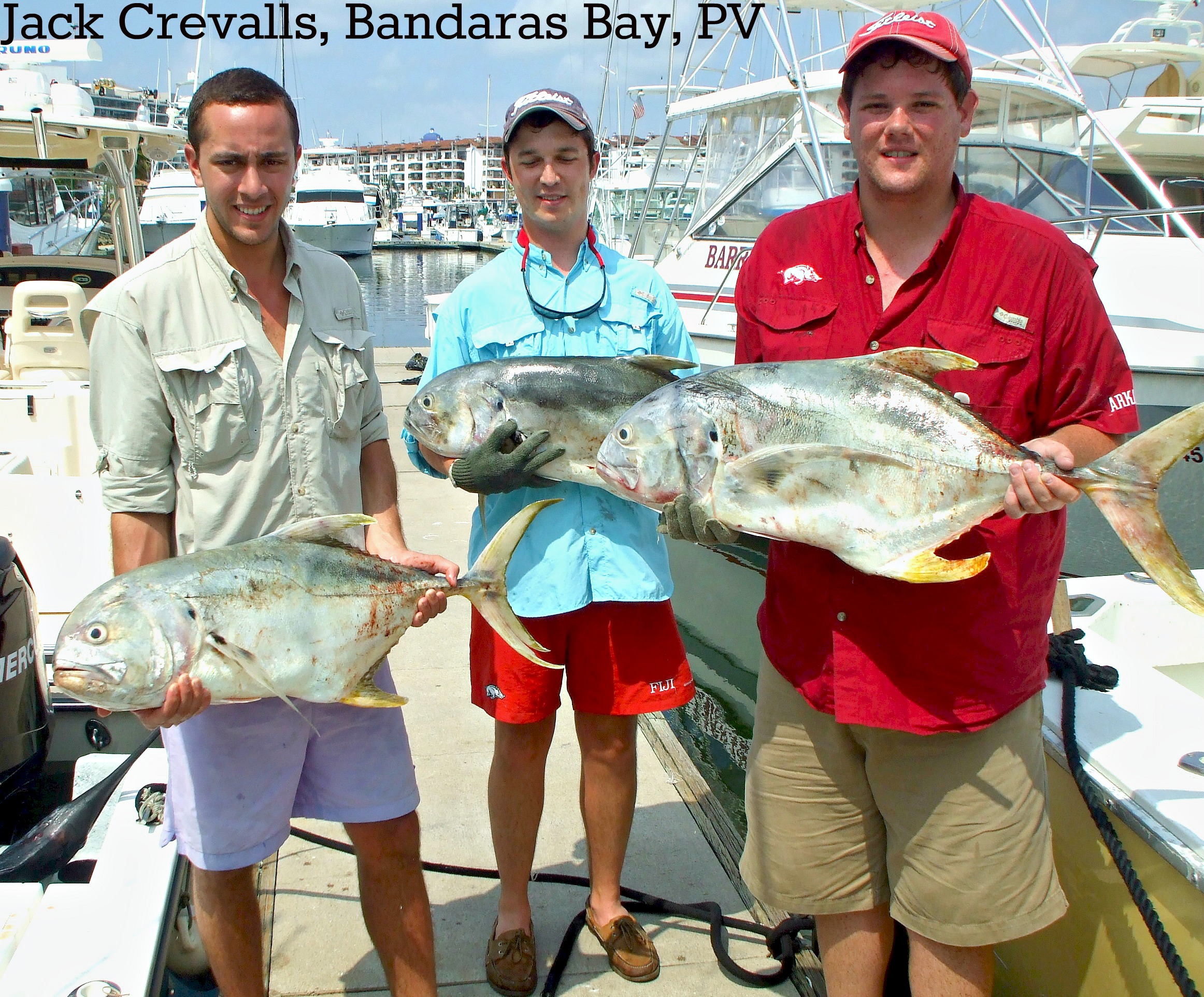 Speaking of Conditions: The water is still a perfect blue, water temps are hovering between 88 and 91 degrees, a little warm but it works. Bait is plentiful, Flying fish near the point of Punta Mita, Bullet Bonito everywhere, Goggle Eyes, Mullets, you name it, the whole area is just packed with bait. The common belief is this is a big fish draw and we´re waiting, but not holding our breath. The bite is getting a little later in the day, but if out on the water during normal fishing hours you´ll be fine. If I have to break it down to be exact, 8 to 12 and then again 3p.m. to 7:00 p.m….. These times can fluctuate a little so give it some slack.

Ok, some insight into the fishing industry here in PV and I would assume in all of Mexico. As fuel prices continue to inch their way up due to the Mexican President Enrique Peña Nieto plan to build refineries. Naturally these cost are being transferred to the public and what was govt. subsidized fuel to the general public in the form of cheap fuel prices has come to an end. Fuel being a primary expense and a determining factor of the price of a fishing trip is a bitter pill to swallow for a Mexican National who is trying to keep his cost down. The market has changed and the pricing for everything to do with a boat or anything that is considered ¨Marine¨ from soap to radios has doubled in price since 2008. Boat owners pressure Captains not to use fuel, yet you have to use fuel if you´re on a boat. So in their only defense to a public that is chocking every last bit of life out of a dollar, they use less fuel. Now a National, no matter how nice will not lose money. Quoted prices are not for what you may expect from past years when it comes to how fast you get to the fishing grounds, how quickly you come back as well. But more importantly, they don’t use fuel to seek fish when they know the area is not going to produce. Looking at it from a consumers point of view, if there are no fish in the area after changing baits and giving it a chance, then I expect to move to another area that may be better. One thing for sure, it can´t be any worse if you´re not catching even a bite or glimpse of a fish of any kind. When fuel is an issue, the boat will move, but you won´t pull lines up from the water and boogie to the next spot. If you´re not experienced, if this was your first time fishing, then you have no clue you´re being screwed. So the price may be right, but the product you will receive at this lower price is substandard and if I was on one of those boats, I´d tell them to take me back in and demand my money back. In reality most people that go fishing don´t have a clue what they paid for, what to expect, where they´re going or even the name of the boat they reserved as they show up in the morning with not a clue in the world except Pocco is supposed to meet me ¨here¨ at seven in the morning.

One last thing, I am not putting videos together, some are a little ¨rough¨ but it´s all a learning experience and it´s all just about fun anyway, there are no professional camera types, no scripts, just a guy or two recording some fun and having a great day… Check out the ¨Fishing Video Album¨ and spend a few minutes watching my less than perfect videos…. http://44.237.204.92/fishing-video-album/