This week we´ve seen the beginning of the yearly seasonal change from summer fishing and summer species to winter fishing. The species that will be dominating for the next several months are Jack Crevalls averaging 35 lbs, Sierra Mackerals on 20 lb average, Skip Jack Tuna, Bonito and for the ¨lucky¨  Sailfish will hang year round off the point of Punta Mita. Those looking for Dorado, Marlin and Yellowfin Tuna will soon be out of luck. Frankly it may already be too late in the season for Marlin and Yellowfin tuna of any size. 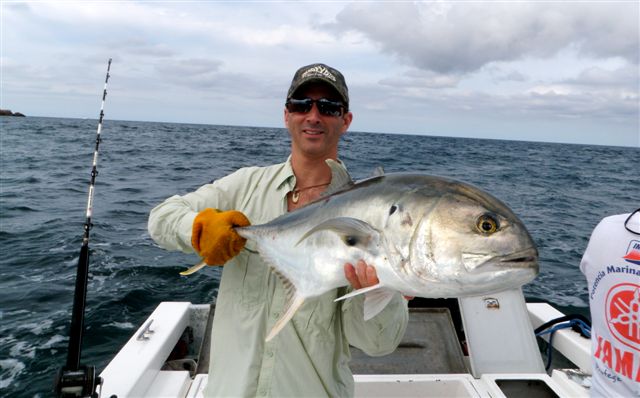 Water Temperatures have dropped slightly to the 79 degree range. We should be seeing Striped Marlin moving in as they enjoy cooler water temperatures than Black and Blue Marlin. We always know winter fishing is coming as we get about two to three weeks of Striped Marlin as they begin to migrate south to more temperate waters.

The unexpected winter rain storms have faded, the water is blue and fairly warm. Skip Jack tuna have been abundant in the bay along with Sierra Mackerals, Jack Crevalls, Bonito, and a host of other possibilities like grouper, Roballo and of course Needle fish. A four hour trip in the bay is inexpensive, fun and the family won´t go brain dead from the boat ride.

The Marietta Islands are still luke warm. But we have had 60 lb Rooster fish move back in. Not exactly abundant, you´ll have to do a little work, but they´re out there and with a smidge of luck, you´ll be pleasantly surprised at the strength and power these fish have.

Corbeteña has chilled out a bit, with illegal long liners in the area with their miles long ¨long lines¨ are ruining the Dorado fishing in the area. Still, Dorado are in the 35 to 50 lb range, a change from the 60 pounders of last week. The Wahoo that was around the rock has moved on for now. Sailfish are still in the area, but moving mostly north near Punta Mita. Not much to say about Corbeteña and less to say about El Banco. For now, I suggest eight hour trips to the Marietta Islands. There are plenty of Cubera Snappers over 60 lbs, they´re great tasting and abundant.

Again, if you can find some safe, long line free waters at the point of Punta Mita, Dorado to 35 lbs and Sailfish are still hanging around the area. Not unusual to boat Sailfish all year long off the point, the numbers for the last few days have dwindled. Again, we get this strange change when the seasons change.

The Marietta Islands are where you´ll find the Rooster fish and if that was all we had to offer it would be enough. Bonito, Snappers, Jack Crevalls, Needle Fish and more are there waiting for you to show up. So take the family out for a short day and have the time of your life. The whales are here in the bay now along with Manta Rays and the possibility of seeing Whale Shares as well. 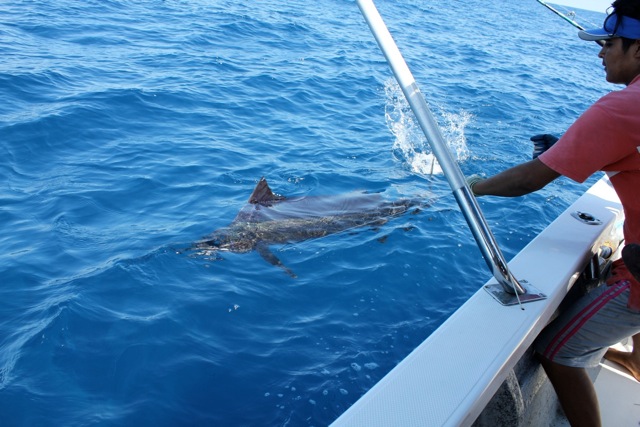 Just a brief note, Marina Vallarta is in a state of turmoil as all the boats in Marina Vallarta have been informed that the leases are no longer in effect, five years after they expired. Like any change, nobody is very happy about seeing their dock fees increase to real world pricing. For now my suggestion is and has been to leave Marina Vallarta and let the legal suits settle. Marina Vallarta will be rebuilt. It will be beautiful when all the upgrades have been done, but until then it´s going to be a sticky situation in Marina Vallarta at best.