Well folks it had to happen, winter is moving in. With the present El Nino being one of the strongest in history I have been expecting conditions to remain the same for a while longer. There were a few storms up north in Southern California that threw some nasty cold temperatures and rain at them which pushed down some cold currents and fronts. These conditions changed quickly and once the water temperatures dropped drastically like they did this past week something had to give. Having said that if you´re happy with winter species, you´ll be fine. The winter storm pattern is setting up in northern waters and the currents being pushed down will affect the area. Winter fishing is here in Puerto Vallarta.

First water temperatures are 76 / 77 degrees which is close to a three degree drop in one week, this is significant. The differences we will see will be the winter migration to southern waters for species like Marlin, Tuna and Dorado as is normal for this time of the year. When looking to our world class fishing grounds of Corbeteña and El Banco we had no indicators to what the season was going to bring at all this year. Yellowfin Tuna really didn´t happen this year, Marlin were in good numbers, but nothing great and the Dorado were very late for the season. Sailfish picked up the slack, but how many sails are you going to catch before you´ve had enough of them? So even with El Ninos hot breath, we´re seeing winter water temperatures moving in with the result of very few Yellowfin Tuna likely moving in. The Seiners (production fishing boats) out of Mazatlan are running around our fishing grounds and if you´re lucky you´ll find 40 to 60 ish lbs YF Tuna that they missed. Marlin are thinning out drastically yet there are still some hook-ups up into the 600 lb range. Sailfish are still in the 100 inch range and they´ll be around for a while longer. Wahoo have been boated in the 60 to 80 lb range for the lucky ones not running wire leaders. Dorado are still north of the rock (Corbetela) like every other species and Bottle Nose Dolphins are having their way with your trolled baits here. Cubera Snappers of course for those who don´t mind jigging. All and all you´ll still have fish to catch at Corbeteña but it will be increasingly challenging amigo, good luck, you´ll need some. El Banco is pretty much the same story, Marlin, Sailfish, Dorado all north of the high spots by about 8 miles. Yellowfin Tuna to 60 lbs around the high spots, Wahoo possibilities, Dorado are still in the 45 lb range. Striped Marlin are in closer to the Punta Mita point. All and all the same conditions exist at El Banco as Corbeteña, I suggest you flip a coin as to which location is best. 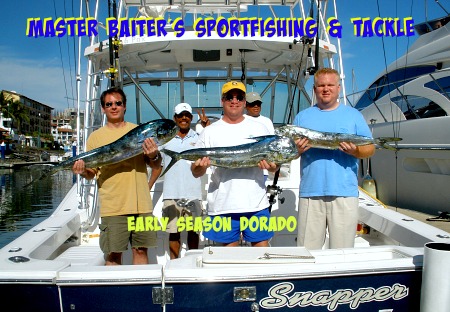 The Point of Punta Mita and the Marietta islands are little changed from last week. Jack Crevalls are everywhere of course and they´re here as well. Sierra Mackerals, Sailfish in the 70 inch range. Skip Jack Tuna at 6 lbs, Bonito, small Rooster fish which are nothing to get excited over. Wahoo off the back side of El Morro. Things should pick up soon for this area but for now go long or go short. Mid range fishing locations are less than exciting but can change in a heartbeat.

Inside the bay it´s looking more and more like winter fishing. Jack Crevalls to 40 lbs are all over the Nuevo Vallarta area as should be expected. With a host of regulars like Bonito to 35 lbs, Sierra Mackerals to 20 lbs, Sailfish for the lucky around Los Arcos or La Cruz. Dorado are still being boated around the Yelapa and north around the beach areas. Footballs Tuna around Yelapa to 40 lbs. There are plenty of fish in the bay so a four to eight hour trip will be a great day fishing and you won´t have to worry about missing a species that isn´t ¨there¨ at the deeper fishing grounds.

All and all the fishing is a notch or two down from the high measure mark. But this is normal and it looks like we´ll be moving into winter fishing which means you can expect the Billfish and Dorado at the very least to start moving out if the water temps stay the same or continue to drop.  We could see the water temperatures tip upwards a bit if we don´t see any crazy cold currents come down from northern storms. This is normal, we know it´s coming every year but we do what we can to pretend the predictable is not going to happen this year. 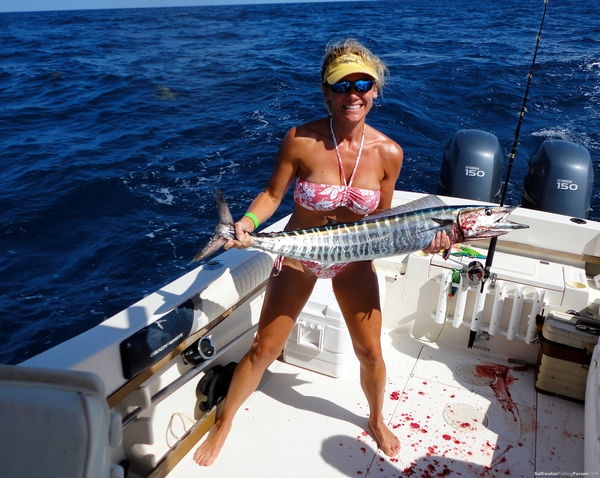 The bite has changed a little, but for those looking to catch fish, I suggest an early depart around 7:00 a.m. It will give you to time to get to your chosen fishing grounds and some time to prepare. It could be earlier in the afternoon around 1:00 so you can hit both bites of you time things right. Lures: Are still blue with silver that mimic flying fish will do the trick and of course jPetrelaros with brown, green and purple are automatic.

Shared boats for 8 hrs targeting Dorado has been very popular! Just fire me an email so I know when you´ll be here and we´ll do the rest. The Downtown Store on Basidillo Badillo and Insurgentes is open for High Season. Call Chris (El Centro Mgr) at (044) 322 112 9558 for fishing, tours or T-shrts amigo.  I am still in Marina Vallarta so take your pick. YeHa!