Whack-A-Moe Fishing, When They Come Up, Hit it Hard!

We’ve seen some cold days in the last few weeks when the cold northern currents moved in. Now we’re seeing warmer days and warmer water in the 77 degree range just move in to Corbetena. For the previous weeks we were lucky to have 74 degree waters, but with no fish to speak of. This could all change now as we’re seeing Yellowfin Tuna Footballs roaming anywhere from El Morro to Corbetena. To be honest we’re seeing water temperatures swinging all over the place. Fishing is never what you’d expect but if you’re flexible you’ll have a great day on the water!

We’re seeing warm water, then cold water in the same areas. For the last few weeks we’ve had beautiful blue water spots in between the clean green water which is always cold. For this reason species like Dorado and Jack Crevalls hitting the same baits. Normally Dorado won’t be in water much under 80 degrees, but with the super plentiful bait of Sardines and Goggle eyes they’re hanging around. Corbetena which have been ignored for the last few weeks found signs of life as the water temperatures leaped to 77 degrees (but for how long). For now I’ve only seen some, not may reports of these Footballs, there could be Sailfish as well, Stripers possibly. But for now there’s nothing you can’t find closer in so it’s another judgment call, judge wisely.

As I just mentioned, if you’re looking for the best area for action the area around Punta Mita to El Morro has been the place to be. With the “clean green” cold water surrounding beautiful warm blue water the challenge is clear. Find blue water, catch fish, not too complicated. Those that followed that philosophy found Football Tuna up to 40 lbs at El Morro, Dorado to 35 lbs possible at Punta Mita, Striped Marlin to 140 lbs are also still roaming this same area as well. You’ll find the blue water out about six miles from the point on a heading of 300. The Marietta Islands are seeing some small Amberjacks to 25 lbs, Possible Pompano to 20 lbs, nothing too large for sure. With massive amounts of Sardines in the area anything is possible. One bait that has been hard to beat is live Squids. Now we don’t get these live Squids in Marina Vallarta, but there is a bait boat off Punta Mita that has been selling these Squids by the scoop. Want fishing insurance, get the Squids, don’t question the prices. With large Sierra Mackerels to 15 lbs, Bonito to 30 lbs and Jack Crevalls to 50 lbs the entire area is alive with action and right now maybe your best bang for your fuel dollar is an eight hour trip!

Inside the bay it’s the same situation, but when you boat a 40 lb Dorado in an area where they’re not supposed to be, then you have a freak fish amigos. Sailfish are still hanging in the trenches near Los Arcos as are Freak Striped Marlin. Jack Crevalls everywhere to 45 lbs or larger. With all the Sardines in the bay you’d think we’d have Rooster fish, but nothing to speak of. Bonito to 35 lbs and tasty. Small Snappers to 10 lbs around the rocks or any structure. Oh, Sailfish and Striped Marlin are also hanging off the La Cruz Marina. I’ll tell you, you can take any species and pretty much find them all over the place. In the bay, out of the bay, just pic a location that’s been happening and head in that direction. Once you get to the “place”, if things don’t work out, move.

The fishing is great, but one thing, Jack Crevalls are full of eggs. They are eating anything in sight and it’s hard at times to get your bait in front of other species. The Crevalls are ravenous and soon they’ll be laying eggs and not taking any baits at all. With Millions of Jack Crevalls in the bay the fishing is incredible and with the strange swirling currents anything is possible so give a thought as to the duration you’re looking at. The smart play could be to shoot for eight hours, give the Sails, Dorado and Marlin a shot, if nothing is happening, come into the bay and at the very least you’ll have some arm burning action. Not bad options if you ask me.

The bite has finally changed and now you’ll be getting up earlier to hit the bite which is around 9 to 11 in the morning. Water temperatures have held a solid 74 degrees in the bay, but with warm currents of 77 degrees at Corbetena we may see water temperatures increase in the middle of winter fishing. Very strange indeed. The secret for bait this week is Squid is the bait to use, purchased off the bait boats at the Punta Mita point area. You can always find dead Squid in the fish market, Calamari in Spanish. Sometimes you have to go out of your way to make it all happen.

In conclusion, we all need to remember that when you see the birds, that’s where you want to be. With Yellowfin Tuna around the area, they are really only hitting baits when they’re chasing bait balls. So surface boils is what you are looking for. The 40 lb Yellowfin Football Tuna are basically ignoring trolled baits, except maybe live Squid being trolled, this is impossible for Tuna to ignore.

This weeks Tip: The cost of the boat vs. The cost of fishing. You may say it’s the same thing, but in reality it isn’t. With fuel prices rising on a daily basis here in Mexico (even though the rest of the world is seeing fuel prices decline) we see boat owners coming up with creative ways to make you think you’re fishing, but in reality it’s a slow boat to china. Those looking for the “cheap” boat will find prices all over the place. If the only question or comparison you’re talking about is the price of the boat, you need to start asking the “right” questions amigo. What you should be asking is: “How fast do we go to the fishing grounds”? How much time will my line be in the water at the specified fishing grounds we’re for? Should seem basic I know, but it isn’t. First of all most of the Promoters or Sellers of fishing charters and tours will tell you that “their” prices are the best. Which could be true, but who wants to compete for the lowest level of clients? But that price comes at a cost you won’t know you’re paying until you’re heading out fishing. That’s when you see all the other boats, not the cheapest boats, but the correct priced boats passing you like you’re standing still. The cheap boat you’re on will drop lures and baits just outside the Marina entrance. They will troll at ten miles an hour, baits skipping on top of the water like skipping stones. The captain will tell you that you’re “fishing” out as you go towards the fishing grounds. The bad news here is you have no real shot at catching fish at this speed with the skipping baits. It’s a ploy to make you think you’re fishing, but in reality you’re on a slow boat to china. Take the Marietta islands, they’re 28 miles from Marina Vallarta. Boats that are priced right will head out to the Marietta Islands at 25 Mph. What this means is the cheap boat will take better than two and a half hours to get to the Marietta Islands. The “Priced right” boat will get you there in an hour. Double this time for returning to port and there lies the difference. Right priced boats will have you fishing in the specified fishing grounds in one hour and you will have your line “really fishing” for six full hours out of an eight hour trip. The cheap boat will take 2.5 hrs out, 2.5 hrs in, leaving three whole hours fishing in your specified fishing grounds! So do you want six hours of fishing, or do you want three real hours of fishing and five hours of travel time? There lies the difference. The cost of the boat is obvious, the cost of fishing broken down by the hours with your line working the correct fishing grounds, well that’s a horse of a different color. So what boat do you want? And what questions are you going to ask when checking out services…. 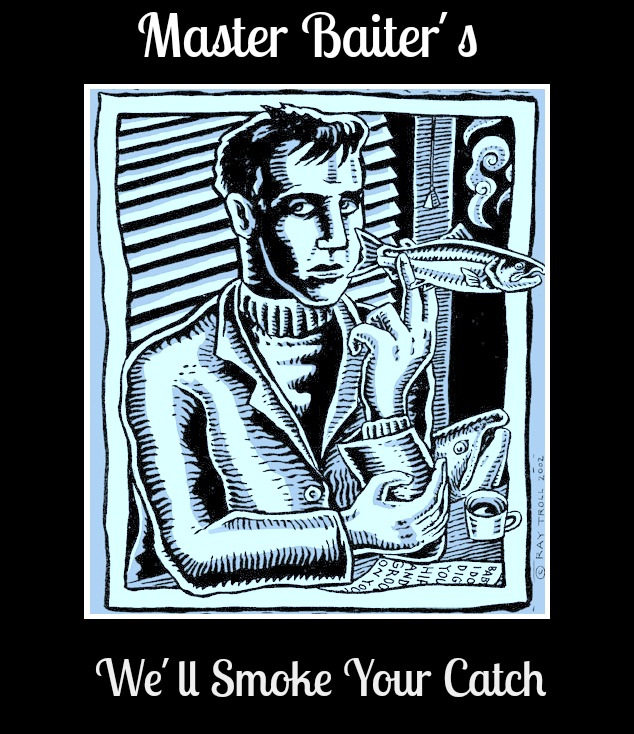 We’re still offering to smoke your fish, we’ll keep half, but Sailfish, Marlin, Rooster fish, jack Crevalls are all great for smoking. It takes us three days to get your fish back to you, just let us know and we’ll be ready at the dock when  you return. You don’t have to be fishing with Master Baiter’s to do this, we can set this up and it doesn’t matter which boat you’re on. Nothing better than smoked Marlin!

SHARED BOATS OR FISHING PARTY: We’re still “Hooking” people up on shared boats, fire us an email and we’ll do what we can to get you on half a super panga, good for two people at this price, 8 hrs for $275 usd. You can’t beat this deal and we’re ready to go when you are… just fire Stan and email and that will start the process.