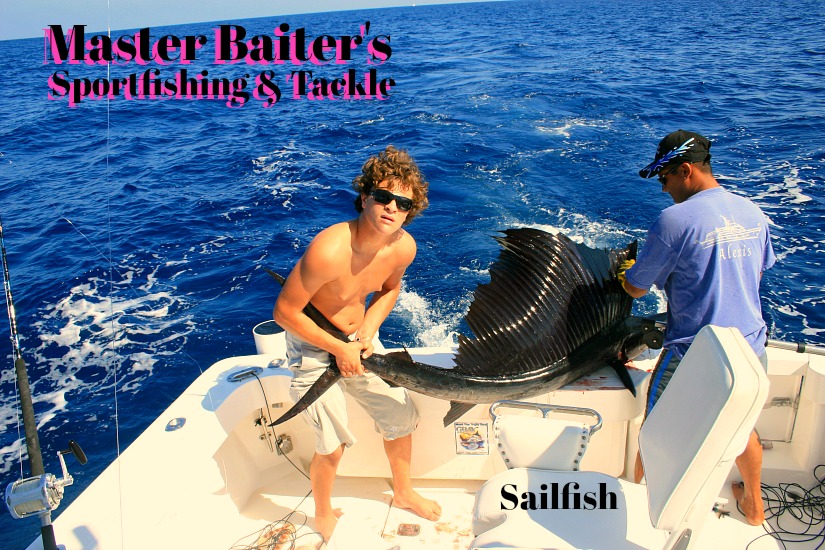 Normally at this time of the year you can have a mixed bag. Some weeks can be affected by passing Hurricanes, or rain storms that bring dirty water to the area for days. Then of course these fish have their own ideas of where they want to be so finding them at times can be difficult. We have the basic fishing grounds, but what happens when they’re not where “they’re supposed to be”. This is the case right now, fish are out there, but they’re being a little weird. Bite is a moving target, Baits are plentiful and many times ignored. Weird baits may work, regular baits may not. Late Afternoon bites can throw a monkey wrench in your day if you’re coming back in too early and of course it never hurts to be lucky

Normally we go through the fishing report location by location but this week it’s so spread out that anything can happen right now if you find blue water. Now that seems to be the issue, recent rains inland have brought heavy amounts of water into the Bay of Banderas. Now it brings nutrients and all kinds of good stuff for the fishing industry, but it screws up the fishing in the dirty water areas. Jack Crevalls seem to hit baits in dirty water, it doesn’t bother them too much. I can’t say the same for Dorado, Marlin or Sailfish, which of course are our primary “players” for the Sportfishing crowd. For now those heading out need to find clean water. We’ve had a few days where even the deep water locations had dirty water to be followed the next day with blue water. It’s enough to make your head spin. Even though you have clean blue water is no guarantee you’ll catch fish. We’ve seen Sailfish and Marlin peppered throughout the area. Now when they’re taking baits is a mystery but we do know the afternoon bite is the best bite. This means if you’re serious and want to catch some fish you need to be at the correct place (another dilemma) around 3:00 in the afternoon! Marlin in the Corbetena area are anywhere from 350 to over 500 lbs if you come across one and they want your presentation! Now that can be confusing as 45 lb Yellowfin Tuna were ignoring live and dead baits yet taking a shot at “Hoochies”. Hoochies are a small rubber lure the size of a wall nut that are normally strung together to catch bait fish. White with a peppering of red is working best which suggest there are small krill squids in the area we don’t know about. Dead baits seem to be working for these sporadic species. El Banco, forget El Banco for now, what used to be the place to be has turned into a less reliable fishing area than Corbetena. It looks like the rains and hurricanes are calming down and I expect the fishing to improve greatly as it normally does in September. Just leave a little later, arrange for bait and be ready to go mid to late afternoon. Good Luck. 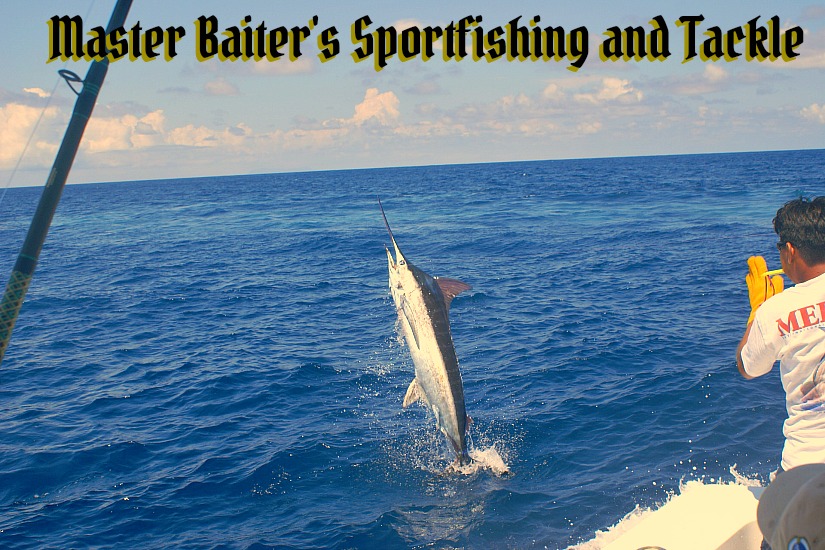 Closer  in between the Corbetena and the Marietta Islands is another area that is normally great for dropping baits as you troll towards the rock island of Corbetena. Sailfish and Marlin have a fondness for this area and can be very productive so don’t ignore. It amazes me how people get a locked in mindset and head for a specific location and never work the entire area. Those that do adjust to these conditions understand that fish move and it’s wide open out there right now. If heading to Corbetena drop baits here. If heading around the Marietta Islands the area around El Morro can be very surprising with Sailfish and even Rooster fish at times. For now there are naturally plenty of Jack Crevalls, Reef Fish, Sparse Sailfish, and a shot at a smaller Blue Marlin in the 350 lb range. It is challenging. If you’re around the point off Punta Mita just a few miles off the point there have been some Sailfish boated here in the mid-afternoon hours. Dorado are also in the area but they’re small and not keepers. If you’ll notice Dorado are showing up later and later in the fishing season around PV. Long Liners with guns fishing illegally are a huge problem as their lines get everything passing the area. Buoys with decent sized and super plentiful good sized Dorado will find Long liners the next day streaked with these illegal fisherman killing the Sportfishing! Having said that there were some nice 30 to 40 lb Dorado for a few days, now if you’re lucky you’ll find some larger one and again they move so if not today, maybe tomorrow! Bonito are sprinkled in the area at 30 lbs and there is always the possibility of Needle fish or Dorado. Keep positive the fishing at this time of the year normally explodes, so great fishing could be happening as we speak! 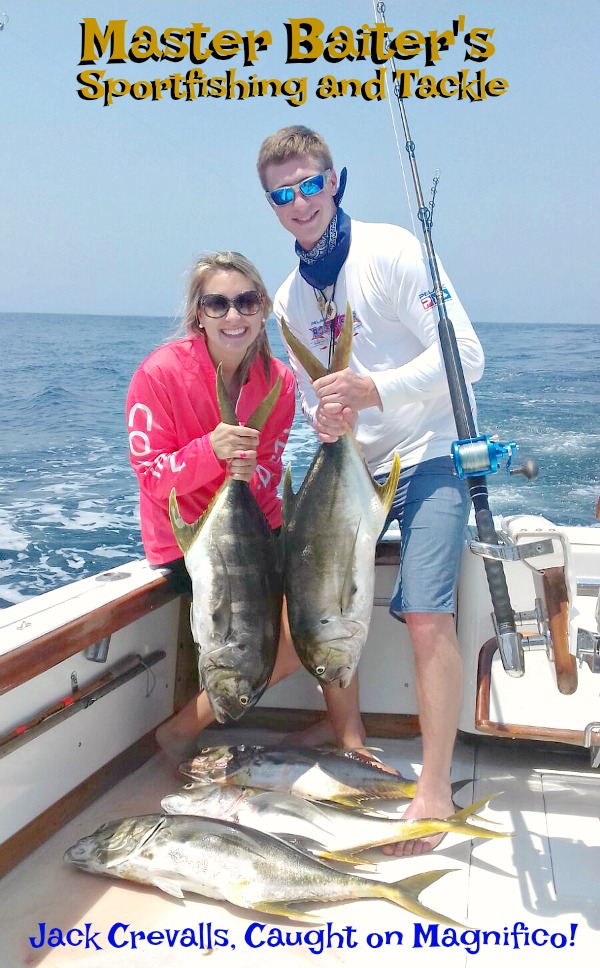 The bay, well let’s just say go slow! With three major rivers spilling into the bay with dirty water colored by the melting adobe soil Mexico is so famous for has changed the bay from blue to a coffee colored, obstacle filled mixed blessing. We have lots of trash, stumps and even debris like old floating refrigerators waiting for your prop or shaft support to find! If you can find clean water the fishing will naturally be better. For now the bay is “challenging” at best. Blue water will present Yellowfin Football Tuna in the 35 lb range at Yelapa. Sailfish are still around the Los Arcos area about a mile out. Dorado love this area as well and can surprise with some larger fish. If you come across a trash line, the Dorado there are just babies and should be ignored, but keep the bigger Dorado that do check out the Trash line. Bonito of course to 40 lbs, Jack Crevalls at 35 lbs, Needle fish at 30 lbs and a host of other species around the structure or rocky shoreline. There are fish to be had, it’s just finding the cleanest water. If we get a break from the rains the bay will return to blue water quickly so check conditions from us, we’re as close as your phone for the latest information. Especially since this publication will be taking a vacation for the next week or so. Good luck and remember even less than perfect conditions can produce some great action amigos… Good Luck!

Water temperatures are a wonderful 86 degrees, about the same as our air temperatures. The bite is a moving target as mentioned so early morning departs may not be the best idea so sleep in a bit and be where you want to be about 9-ish to start. Baits have varied greatly, with tons of 5 inch Flying fish, Tons of Skippies or Skip jack Tuna, Baby Dorado all over the bait situation is outstanding. Having said that we find dead baits are still working many times better than live baits. Hoochies as mentioned earlier is a “out of the box” lure you just try out of frustration. And this may be the secret this week, try what you don’t think will work and sit back. Nothing happens, change it up and try again. One will work and you’ll know what to do after that, hopefully… ha ha.

We’re experiencing the old trick the promoters us saying Master Baiter’s is “Dead” or out of business. Nothing new, my Mexican Competition at its best, trying to steal my business. As a reminder we are located at the Westin End of the Marin between Docks A and B on the boardwalk so don’t be confused or lied to. Master Baiter’s is alive and well. Tours, Fishing, T-shirts, hats, Polo shirts, ladies shirts and our world famous Koozies. So come in, Say hello and let’s go fishing!

Remember to visit our new location on the Malicon or boardwalk on Morelos right at El Faro or the light house. Also look at our web page, we have some new boats, removed older boats and have some different options. We are showing some less expensive boats for the budget hunters. Then we have the nice boats that are priced accordingly. Then we have a few new yachts for fishing or cruising. We’ll be adding Sailboats shortly for the Sailors out there. We also have some different products in the Boardwalk store I don’t have in the marina store as yet. So go in say hello to Ben or Carmen and check out my newest location!