Sorry I missed you all last week, I was in the Fred Hall Fishing Show and was disconnected from my computer. I would rather be lost without my car, my god what have I turned into? But the show was a success, made lots of new contacts, touched bases with old contacts, laughed a lot. We all discussed safety concerns in Mexico, I gave them my thoughts on that, then we discussed the Monster Yellowfin ¨They´ve¨ been yanking out of the Tres Maria Islands. They didn`t know how correctly they used the word ¨yanking¨! Stand by, you´re going to get some information that if you are coming to go fishing  at the Tres Maria Islands outside of Puerto  Vallarta you need  to know, I will keep it as brief as I can. But it can quite possibly save you some serious distress……

About two years ago there was a new bulletin board that was started by a couple of Skate Board guys that found a popular following in the void of ¨Credible¨ Puerto Vallarta information as it relates to the Sportfishing Game. That was their comments, Master Baiter´s has been publishing articles for years…. But, It quickly turned into what many considered the best source of information there was about Puerto Vallarta or P.V. as the locals call it.  This free bulletin board crew of Marina Vallarta Locals, the children of the original PV Crew that started Club De Pesca more than fifty years ago! These kids all went online and chatted the site up, basically stacking the deck on their four hand game. It brought some attention to Puerto Vallarta and acted as a marketing tool filling the void to a new generation of internet user. This bulletin board was working on some level so we all wished the best for them all. It Grew, it got famous and they got careless with your safety for a fist full of Gringo Greenbacks. 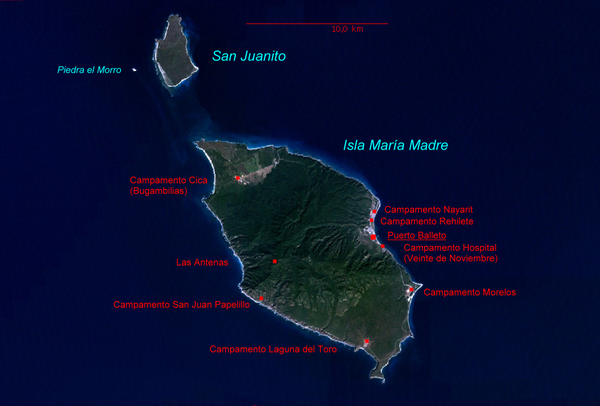 Conservation is an interesting thing, that is until it starts taking money out of your pocket. Then it turns into something you or rather ¨they¨ either ignore or just pretend isn´t worth any bother / attention since nobody’s in Mexico to enforces this anyway. So why worry, make money, nobody knows they are there. Well that was for the most  part  true until the news stories made national news of Yellowfin Tuna being boated off the *Tres Maria Islands   (http://en.wikipedia.org/wiki/Islas_Mar%C3%ADas) well over two  hundred pounds. Now these sorts of comments will get the hair on the back of your neck standing up. You may have to go a ways, but for Southern California types, two to three day trips are common place and these guys are lining up for Monster Yellowfin Tuna! YeHa, Happy Day, ¨The Cows are Back¨ went the raves and they`re still ranting. News of a four hundred and thirty pound Yellowfin Tuna that was boated off the Tres Maria Islands was heard far and wide. The following days there seemed to be a mad rush to these hot fishing grounds with Tuna in excess of one hundred and fifty pounds on a daily basis. Sportfishing Publications, Magazines, Freshly Famous Web Sites that own and sponsor these boats, everyone is jumping on the news and promoting a very small handful of companies who specialize in taking six to eight anglers a day out fishing to these Islands. There is only one problem with this happy fishing fantasy… The fantasy of hitting monster Yellowfin Tuna in ¨their¨ newly discovered fishing grounds. A new secret fishing spot as they beat their chest like victorious Gorillas and once again declared themselves the King of Fishing in Vallarta. But there is one thing that seems to  be  going unheard! The Tres Maria Islands (Islas Marias) is a Biosphere Reserve!

You may ask yourself ¨What is a Biosphere Reserve¨? Here´s the answer:

Biosphere reserves are areas of terrestrial and coastal ecosystems promoting solutions to reconcile the conservation of biodiversity with its sustainable use. They are internationally recognized, nominated by national governments and remain under sovereign jurisdiction of the states where they are located. Biosphere reserves serve in some ways as ‘living laboratories’ for testing out and demonstrating integrated management of land, water and biodiversity. Collectively, biosphere reserves form a world network: the World Network of Biosphere Reserves (WNBR). Within this network, exchanges of information, experience and personnel are facilitated. There are over 500 biosphere reserves in over 100 countries. Hit the link for more exacting information **(http://www.unesco.org/mab/doc/faq/brs.pdf)

The other thing to remember is these are also a prison on these islands, they´re the Alcatraz of Mexico with some really bad guys who seem to find their way off the islands on occasion. They sometimes leave by water, which of course means those with boats come pick up these floating criminals, which of course could be you if you are looking at this situation through the navy´s eyes! You can find more information here: http://en.wikipedia.org/wiki/Islas_Mar%C3%ADas_Federal_Prison

Ok, now you know why this area is so sensitive, both to the government relative to the prison. And relative to the ecosystem this Biosphere is. This is an international Conservation area where we are not allowed to fish. Hell we shouldn´t even want to fish in these areas. In the states the fine for a corporation is over a million dollars! These boats are risking everything for a fist full of Gringo Greenbacks. Here in Mexico is seems a sandwich, few sodas and some fish is all it takes to turn the local NAVY guys into their best buddies! Well that was until the Commandant of the Navy here in PV got wind of this from a guy speaking  to him of the fishing as they watched their kids playing soccer here in town. That´s right folks, the commandant heard this from some guy at his kids soccer game. The word is out and now you can expect to see boats confiscated and worse. Puerto Vallarta is a small town and you never know who you are talking to.

For those of you wondering how this affects you and your safety, there is a lot you don´t know. The first thing, without mentioning  names, there have been  boats that have been stopped, warned, taken in, had their pictures taken, finger printed then  released with a strong warning not to return. So what do they do, they go back, do it again, and again, and again… you get the idea.  There was one boat where the Captain was grabbed with his boat, they shaved his head, put him in with the general population and was then released five days later. I can only imagine how worried his wife was. He was let go so he could tell everyone to keep their distance, it worked in the opposite, this captain chose to keep his mouth shut and keep doing the same thing with his hand full of Gringo Greenbacks.

There was word the Mexican National commercial fishermen were being grabbed, their fish and equipment taken as they too were kept twenty four hours on the prison island.  Now to me I think this is enough warning, but there are still those who are putting trusting and unsuspecting clients into harms way. This is serious stuff to be sure. So you need to know the risk you are taking as you trust this company, boat, web site pushing these boats and Captains but are not hearing. Why, you know why. Most of these guys are Americans, running American Boats in Mexican Waters. Handing out Sandwiches and Sodas will not be working much longer. The boats will start to be seized, kept and moved  to Manzanillo where they handle  things like this and most likely fined big time! But what does this  mean to the Client who thinks he`s on a safe  operation, well he is stuck  as well. Remember the housing on the Tres Maria Islands are prison housing, not the Hilton! The crew on the island stays for extended periods of time, I head three months but that was word of mouth stuff. But one thing for sure, how ever long it is, it will feel like an eternity for you and  those who have no clue where you are or what happened to you. There are no phone call laws in Mexico, especially on an island that is eighty miles out from Puerto Vallarta! One thing is for sure if anything happens you will hear about this all over the international news about how civilian tourist were grabbed by the Navy.

What makes me upset is the mere fact this is an international Biosphere Reserve and the boat owners and captains know it. They don´t tell the clients what they are doing or it would mean money out of their pocket. They Famous web site that is owner of one boat in particular could not declare how these guys are Killing it at the Tres Maria Islands as they sucker you  into taking  the unknown risk as you hand over your Gringo Greenbacks!With all the news these islands are getting it won´t be long before they keep a  boat, make the crew and clients go through hell not to mention  the families of those on  these boats. You will be treated  like a criminal and possibly fined. Forget how  long you will be  on the island, forget the money you  paid  for  this  to happen to you, but remember the  guys who told you it was safe to  fish  the  Tres Maria Islands…..

This is a warning, there will be a boat taken and it will be on the international news as all hell breaks out in the fishing world. This sort of thing could kill fishing in Mexico, all of Mexico. These companies are not only risking their boats AND the clients safety, but they´re also threatening the entire fishing industry relative to Sportfishing in Mexico. We can´t afford to turn a deaf ear or blind eye any longer.

There are those out there that will not like me stepping on their Gringo Bucks but this is bigger than one or two companies suckering gringos, it’s about not fishing out the only Yellowfin Tuna Breeding Grounds we have on west coast of Mexico. It´s about saving these fish and locations from those who want to abuse Mexico’s Reserves with no concern for the ecosystem.

Be safe, be informed, and Check out the links below to learn more for yourself. Respect the twelve mile limit, there are plenty of fish out there. You can´t rely on those taking your money to do the right thing for even themselves, how do you expect them to give a darn about you? You´ve been warned buy a guy and  company who will not go inside the twelve mile limit.

I did not mention any names or companies, but if you are looking into Fishing The Tres Maria Islands you know who I am talking about, there is more than one amigos looking to put you at risk….

**What is a Biosphere Reserve ( http://www.unesco.org/mab/doc/faq/brs.pdf )