Every year we know we have to deal with the Spring Time Transition. Yes folk’s we´re moving into Spring Fishing from what has been summer fishing all winter long. Bait is not an issue, Sardines, Bullet Bonito, Skip Jack Tuna, Goggle eyes, Flying fish, it´s a fish smorgasbord out there. So you may ask where did the fish go?  Nobody knows. The main thing is to remember El Nino gave us all a gift of summer species in winter. We are now seeing the conditions we would normally see in February. This is transitional fishing, so we will play to our strengths. If you´re the kinda person that thinks fishing is an action sport and you´re looking for action, which we can do easily. Now if you´re going to demand Moby Dick join you on the way back for pictures, expectations of this nature may leave you disappointed amigo. Welcome to the world of Fishing in PV.

Basically, to put it all in a nut shell it´s ¨Jack City¨. That´s right Damas y Caballeros Jack Crevalls are the dominant species in the area and we´re thanking our lucky stars for that or there would be trouble in fish city. So lots of bait, lots of Jacks and lots of cold water. Water temperatures are still at the 74 degree mark in the bay, but to put that into perspective, water temps should be in the 70 degree range, not what it has been for the last three months. The Water is Blue and the currents look to be finally changing, changing to what we don´t know, we´ll figure that out as things move along. We could be moving into an La Nina conditions, but the judge is still out on that one.

Corbeteña / El Banco: Nothing, except Jacks that is. No Marlin or any kind, but you may still come across Striped Marlin, they´re still in the area, my best guess would be 30% chance optimistically, but it´s positively work to catch anything. Yellowfin tuna, they´re around the Tres Maria Islands, but I got reports that there were at least twenty Seiners raping the only real fishery we have. Sailfish are a possibility they´re in season now, Cubera Snapper with wounded bait trick produces 50 to 75 lb picture opp. Plenty of bait in all the fishing grounds, high visibility blue water. For some reason we still have Wahoo at 60 lbs in the area and they would be a strong possible, target them with wire leader though or you´ll be lucky to boat one. Transition periods don´t last long, but for now I´d go for shorter days. But, if you´re looking for 50 lb Jacks, there´s plenty in the area.

Marietta Islands / El Morro / Punta Mita: Well the Rooster fish that were picking up so nicely last week, took a powder. You may find Rooster fish in the 30 lb range, be patient and you just might hit one or three working it for the whole day!  Wahoo are still hanging out in the channels around El Morro and we´re still boating them in the 45 to 80 lb range. Jack Crevalls anywhere from 25 to over 50 lbs are all over the area as you would expect in transitional fishing. Needle fish to 45 lbs, Bonito to 40 lbs, Sierra Mackerals are still plentiful to 20 lbs and of course around the reefs you´ll always find Snapper and sizeable Amber Jacks to over 50 lbs. Very few Sailfish are seen, not many hookups. Striped Marlin to 250 lbs are sparse, but there, somebody is going to catch them. For the most part if heading out for eight hours would give you a shot at Stripers, Rooster fish, Amber Jack around el Morro and of course Jack Crevalls in the bay. Stay tuned things change quickly.

Inside the Bay, for the average angler this following week it would be a great idea to thing small. Small days, smaller fish, plenty of action at affordable prices. To speak of the freak occurrences, we had another Sailfish boated in the area of La Cruz Marina. Striped Marlin strikes happened in the middle of the bay chasing Sardines Bait Balls the size of McDonald’s parking lot! Bonito to 35 lbs, Jack Crevalles to 50 plus pounds, Needle Fish 35 lbs plus, Snapper around structure. The river mouth of Ameca, right there at the airport is seeing Snook in the 25 lb range, Snapper to over 40 lbs with down riggers. The only real consistent and predictable action is in the bay, Flat out straight talk no sugar added!

The water is High Visibility blue, Water temps are a chilly 74 in the bay, 73 outside the bay. The Bite is basically happening all day. The Moon is full so it doesn´t hurt to be early at your favorite spot on the early side. As far as lures go it’s all about live bait, dead bait and Rapallas. For now the fishing isn´t perfect, if you´re a little flexible with your targeted species then you´ll have a great day. 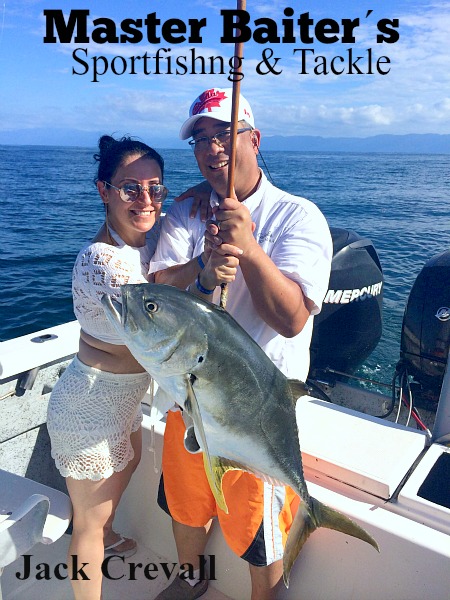 Shared boats: Yes we´re still ¨Hooking¨ you up with others on shared boats. Contact us before you arrive in Puerto Vallarta so we can start working on matching you up with other people. This Special is half a super panga, you can have two people max fishing or sightseeing for $275 usd for eight hours (not per person). This is the best fishing deal in town. If downtown visit our Store on Basidillo Badillo and Insurgentes. Call Chris (El Centro Mgr) at (044) 322 112 9558 for fishing, tours or T-shrts amigo