For the last couple of weeks we have seen what I would call the most frustrating fishing you can come across. Plenty of fish, plenty of bait and plenty of frustration as almost every species to a fish was ignoring any bait you put in front of them. With hugely abundant bait in the bay and surrounding areas there has been little to offer that could entice these fish to even glance in the direction. But like I always say, if you don´t like how things are now, things will change shortly and they have amigos. All of a sudden Rooster Fish, large Snappers, Arctic Bonito (skip Jack Tuna), Pompano, and even Needle fish (a summer indicator fish) are turning up around the islands and reefs. So things have changed, why, who knows. Still plenty of bait in the bay so we won´t question why, we´ll just enjoy it for what it is.

The deep water locations of El Banco and Corbeteña are both a tossup. You can come in with Yellowfin from anywhere around 60 lbs to 200 lbs. They may be a few miles off the high spots or they may be forty miles off or the Tres Maria Islands. The water may be clean, but it will probably be ¨clean green¨. Which is working, but blue is better. Cubera Snappers are also in the area and with a little luck you could still boat a Dorado of decent size. For me there are better locations to be spending your fuel dollar location wise. 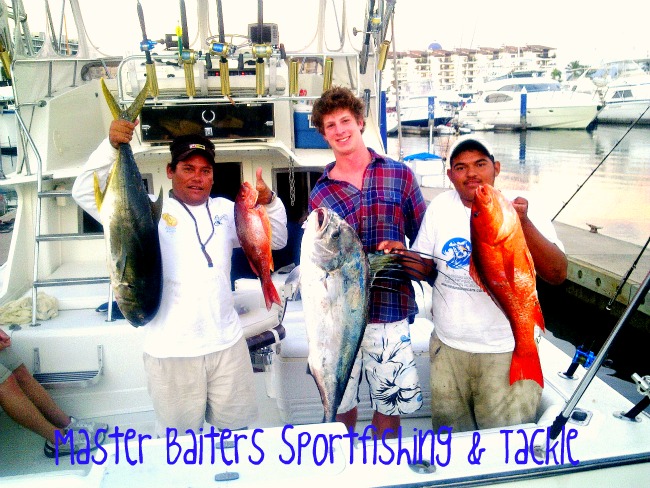 Punta Mita is seeing the invasion of Snappers from 20 to 45 lbs.  Rooster fish around the Sayulita area and the possibility for a Sailfish if you can find a warm current. This area has been ignored for some time now and would be an option to the islands.

Speaking of the islands, the water is still warm with Needle fish around the reefs. Needle fish to me are indicator fish that warmer currents have moved in as we enter summer, not winter. So there are some strange currents out there, where they are coming from is a mystery. But with Rooster fish in the 40 to 60lb range who cares. Snappers are abundant (35 lb average), Pompano from 10 to 30 lbs, Jack Crevalls, Arctic Bonito and the list goes on. All and all this has been the hot location this week. Try and avoid the crowds if you can. Something to remember, the Rooster Fish hav e been coming up in the hours between 1 and 4 p.m. now. Early birds are hooking int o several different species, but  Roosters are chasing bait balls and when they come up you cast live bait into it and see what happens. They may like it, or they may not. Look at Roosters right now as a cherry. If they hit, great, but you have an equal chance they won´t and there you are…

Inside the bay is still frustrating. Four hour trips are less than exciting right now. The fish will be small and smaller. With Whales in the bay, fish have a tendency to think they will be lunch so they don´t linger around whales. Yet there are still Yellowfin Tuna off Yelapa, Sailfish also. The bait must be keeping them in the area, but warmer water is also in the bay with the warm days we´ve been having and the currents. Sierra Mackerals are abundant, Snappers around the rocks and in schools. Like normal at this time of the year the bay is small game fish central.

When you have the general perception that there is only one place in the area to catch fish, this is a good time to zag when the others are all ¨zigging¨ in the same place. With crowds attacking every bait ball that comes up, you find you will have crazy captains racing from bait ball to bait ball. Of course this practice is not a good idea when you have a fish on and a boat between you and the fish! Tempers flare, fish are lost, it´s just a bad situation. You won´t change things, so why not try something different. I have been receiving reports of massive herds of Snappers off Punta Mita and the area around Anclote, the reef is strong when it comes to Roosters. So try ¨zagging¨ when the others are in a frenzy ¨zigging¨…

Until next time, don´t forget to kiss your fish!

Master Baiter´s Sportfishing & Tackle is located in Marina Vallarta on the Boardwalk between the light house and Porto Bellos restaurant. Come by and say hello!  Remember, at Master Baiter´s Sportfishing and Tackle, We Won´t Jerk You Around! If you have any questions on any subject regarding fishing or Puerto Vallarta, feel free to ask at my email: CatchFish@MasterBaiters.com.mx