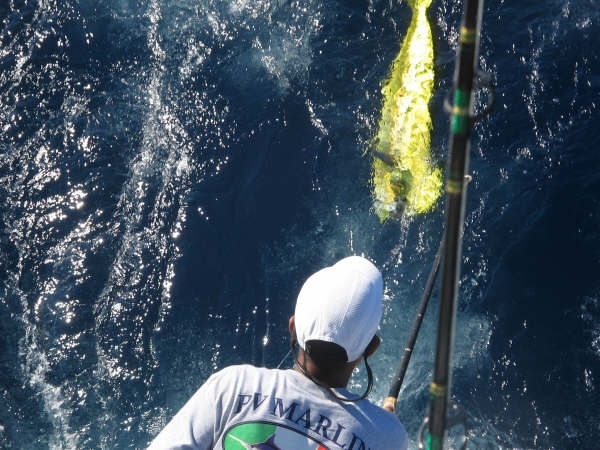 Like the title says, the currents that have been churning in the bay have gotten stronger in the last few days which are coming down from the north. As you may remember Puerto Vallarta is enjoying some cooler than normal temperatures for this time of year. As we all know weather patterns follow water temps and while the weather is perfect, the ocean conditions turning cooler means that it won’t be long before the trophy game fish of Marlin and Yellowfin Tuna head for warmer waters  to the south. The main reason we still have large trophy fish at the moment is because of the massive abundance of bait in the bay and at the fishing grounds.  If you are looking to boat a Black Marlin or a monster Yellowfin Tuna, then you better get your butt in gear and get out there or it will be another year before you can cross this off your bucket list!

One indication that the water is cooling down quickly, is the Whales have arrived! Normally it is December before the official Whale Watching season begins, but with the numbers of whales increasing daily there are sightings from the beaches and hotels now! Other indicators are the arrival of Sierra Mackerals in large numbers as well as Jack Crevalls. These fish are here all year long, but when the water cools down, they become very abundant and with water temperatures in the mid to upper 70’s in the bay and just a little warmer of 78 degrees at El Banco and Corbeteña. It’s just a matter of time before we head into full winter mode when it comes to fishing. So put that in the back of your mind for now and make your fishing plans accordingly!

This week we are seeing flying fish all over the place, not the species but rather the action itself. Yellowfin tuna over 200 lbs are still hurling themselves out of the water and like last week it is still difficult to get them to pay attention to what you are presenting to them bait wise. As these fish, Black Marlin included, swim through the monster clouds of krill squids and sardines the size of your thumbnail with their mouth open, you have a slim chance of boating one of these prized game fish. Now this is not to say they won’t take your bait under any circumstances, but you better be there when they’re ready to take baits. This time of the day is commonly called the ¨Bite¨ and it can spring on you unexpectedly, and then make all the difference.

As we see the cooler temps at El Banco, the YF Tuna are still there. The better captains with a selection of equipment and lures are finding ways to entice them to pay attention to what they are offering.. If you hit the bite just right. Yes there are Black Marlin and Sailfish here as well, but the same conditions exist and they love these krill squid like you can’t imagine! Running a string of Hoochies or small krill squid lures can pay off, but you better be patient! The Red Tuna Crabs seem to the thinning out after three weeks of these crabs enjoying their perfect conditions as they follow the currents. But they are still out there and this is another issue a savvy captain can deal with, but again only if he has the tools to do his job.

Corbeteña is much the same. Big fish, lots of Tuna and Marlin, lots of bait in the water. One different thing about Corbeteña this week is we have seen the Cubera snappers start to school and they have been surface feeding. They are running in the 45 to 60lb range presently and will take a google eye in a second. Wahoo has also been on the finger jutting out under the water from the rock and those using wire leaders are boating some nice sized Wahoo in the 65lb range. But remember, these are a non-schooling fish so be prepared to target a different species, but still give it a try, you may be surprised on what you may hit! And if you ask the captain if they taste good, they may just say no! So listen to me, they are the best tasting fish out there in my book and anyone who doesn’t know what they just caught, when in doubt, take the fish! Dorado are here in the 35lb range, Sailfish up to 120 inches or 100lbs are also taking the opportunity to stuff themselves on these krill squids! The area between the Bank and Corbeteña is always ignored until tournament time, so be smart and hit this area as a secondary or backup plan.

The Marietta Islands have exploded with species you don’t normally associate with this area. Amber Jacks, Wahoo, Sailfish and more are there and surprising those lucky enough to hook into them. The Wahoo that were boated were sheer luck, those hooking them perfectly in the corner of the mouth hit the jackpot! Jack Crevalls, Rooster Fish, Sierra Mackerals, Bonito, Skip Jack Tuna, and a boat load of African Pompano are there waiting for you now. Right now I recommend 8 hr trips to this location if you’re looking for a short day and plenty action. But be warned, there were a few days last week where if you went out, you probably came back with nothing. There is nothing worse than finding a boil on the surface to find these fish couldn’t care less about what you are offering. Such was the case with a few boats last week. But the nature of the game is such that no matter how good your captain is, how much equipment you have, you aren´t going to come in with fish 100% of the time! Sorry to be the one to break this news to you amigo… but we all do what we can!

The point of Punta Mita to the north is full of Dorado and if you’re near Sayulita and the reefs and rocks, you are finding Rooster Fish, Dorado and Sailfish. Large Sailfish are setting up house about ten miles off the point feeding on Dorado in the 20 to 30lb range. Many a boat that couldn’t turn the head of a YF Tuna or Marlin have come back in to the point to bring in the blue plate special of Mahi for Dinner!

Four hour trips in the bay are seeing mostly Sierra Mackerals, Snappers, some Snook, Bonito, Skip Jacks near Yelapa and Sailfish at the southern point of Cabo Correntes….

With the extreme tides, the full moon and the abundance of bait Captains have had their share of excuses and challenges. But now that we´re finally moving out of these conditions the Sailfish will remain for the next few months and we should see Striped Marlin move in since they are partial to cooler water temps. The secret now with these uncertain water temps and currents is to keep an eye on what is coming in on the docks and where they are coming from. Like always, past results are no guarantee you will enjoy the same results, but it’s a good place to start. Well now that I sound like a stock broker, keep the faith and hang in there. Puerto Vallarta always has world class fishing and as we move into winter conditions we still catch fish when others wish they could! I invite you to see why Puerto Vallartas fishing grounds are considered some of the best in the world for Yellowfin Tuna, Marlin of all species and Sailfish.

The Whales have moved back into the Bay of Banderas, so make sure you keep your eyes open. Turtles, Manta Rays, Bottle Nose Dolphin are everywhere. And remember when you´re in Vallarta make sure you get out on the water. Also While in town don’t forget to visit the Village in Marina Vallarta with Restaurant row and 150 shops from everything from hair salons to Peruvian Cuisine (its lite and wonderful), you´ll have fun, get your food fix and who knows, maybe rediscover how cool the village really is. If it´s been a while since you’ve been on the ¨Other Malicon¨ then it’s time to check It out.

Until next week, don´t forget to kiss your fish!

The trade name Master Baiter’s ® Sportfishing and Tackle is protected under trade mark law and is the sole property to Stan Gabruk.  Always ask to speak with Stan to insure product quality and to insure you are working with the true Master Baiter´s ® and not an imposter