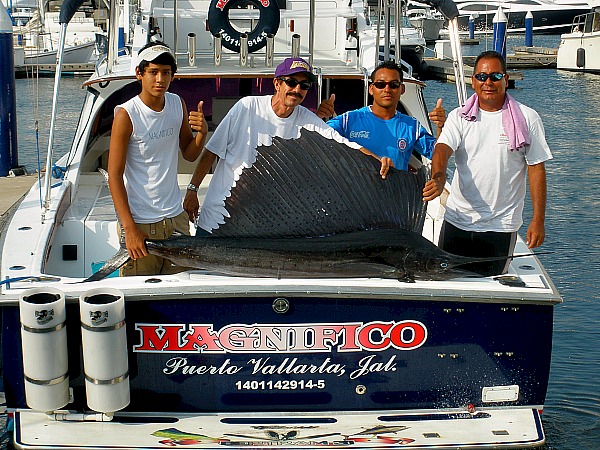 Every spring, beginning in the second week of April we run into breeding season. To say love is in the air in Banderas Bay was an understatement. Everything stops as the mind and body of several species focus on procreating. That´s April, now that we´re in May we´re seeing things change as water temperatures inch upwards. Bait is increasingly more abundant with mostly smaller Sardines and Google Eyes. Yes folks, it´s still winter transition fishing but the end is in sight as summer species move back in.

For now the water is still ¨clear green¨ in color, which works fine for fishing, doesn´t affect the bite much. Water temperatures are now in the 75 to 78 degree range, but the currents are still swirling, so electronics on the boat is a welcome tool which will direct you to where to drop your baits. If you´re lucky enough to find yourself in the San Pancho (San Francisco) area north of Punta Mita you´ll find nice sized Dorado in the 35 to 60 lb range. Sailfish are also hanging out in the area as is normal for this early part of the fishing season. In this area you´ll want to use Google Eyes or whatever they´re hitting locally at the time you reach the fishing grounds. The down side is this will be a ten hour day due to the distance for these fishing grounds. If you´re looking for sizeable gamefish, for now you´ll need to put the time in, but it´s not that much time amigos! 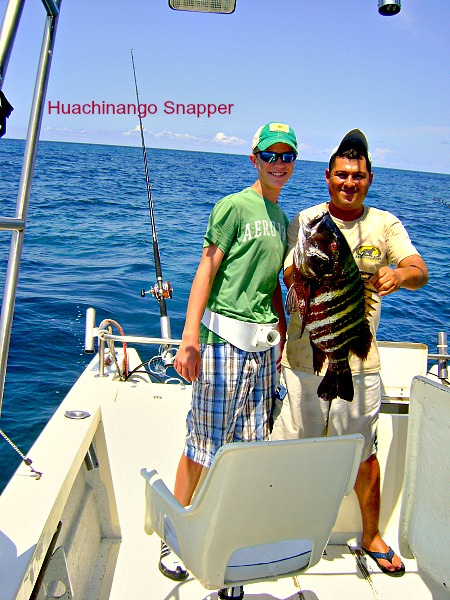 Corbeteña, a location I have not discussed for weeks and weeks is seeing an invasion of Snappers in the 35 lb range. Fields of red water is impressive. With all the Sardines in the area, the smaller Snappers are just chowing down as they come to the surface and take surface baits. With a little luck you´ll find Sailfish here at the rock, but don´t bet the farm on it. For the moment not much of a reason to head to Corbeteña for.

It´s a tossup between the Marietta Islands and the point of Punta Mita. Rooster fish are once again chasing the ever increasing amount of Sardines. These are the smaller Sardines, not the longer ones, so use smaller spinner type jigs if trolling lures. Snappers are also in the Marietta Islands, but on the smaller side between 15 and 25 lbs, perfect for the Blue Plate Special. With a bit of luck we´ll see Dorado move back in to the Marietta Islands, if water temps hold up that is. Add the regular players of Jack Crevalls in the 30 lb range, Bonito, Skip Jack Tuna and Sierra Mackerals and then you´ll have a feel for the conditions.

Inside the bay, it´s the same as it has been now for weeks. Plenty of Sierra Mackerals ranging from 5 lbs to 25 lbs, they´re great tasting but not excuse enough to hit four hours in the bay. Jack Crevalls, Bonito, Skip Jack and smaller Snapper around the structure areas will round it all out. For younger Anglers it´s perfect. For older types looking to have some short day fun with light tackle, you´ll be happy. With clear and clean water in the bay, the currents have not churned up the sea floor sediments causing dirty water. So we´re counting the blessings we have in the fishing world in spring. With the moon in a favorable phase, getting to the fishing grounds at the break of dawn will most likely be too early. Be where you want to be by 8:30 a.m. and you´ll be on time! 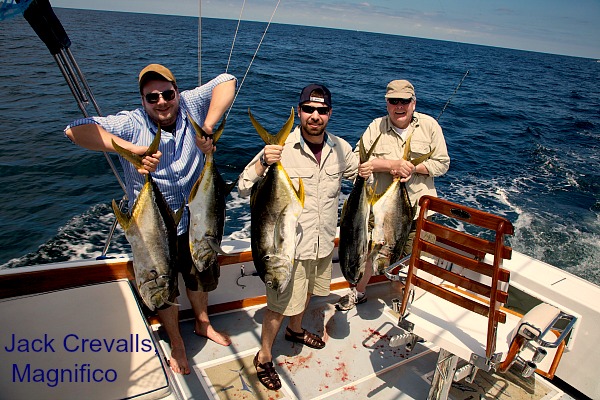 Traditionally fishing season begins in May, but May is the lowest part of low tourism season which means you´ll find some deals on the hotels. The humidity is getting a little more intense by the day, but this is normal. The seasonal expats are beginning to head back north. The Marina is noticeably empty as we move into tourisms low season, but it´s the beginning of High Season for Fishing amigos. So get your equipment tuned up, get the line changed on your reels and back it all up with Spectra for the Marlin Days. For now we´re not exactly on fire when we talk fishing, but we will be soon. So get ready, stash those pennies and contact me about our new lay-away fishing plan. We’ll take deposits, build up an account where we can take the sting out of fishing and make the vacation dollars, especially with families, go farther and at the same time insure your day on the water. Contact me for more details as we develop the program. Basically for the cost of a Starbucks cup of coffee, you can get an eight hour fishing trip on a super panga for the equivalent amount. Funny how a few dollars can add up to hundreds in no time. Something to think about.

Feel free to ¨Like¨ these articles or better yet, follow us as we continue to post the only Real Time Fishing Reports in Puerto Vallarta, About Puerto Vallarta by a Real Business owner in Puerto Vallarta and forget about those guys at Bloody Decks copying my articles and reposting segments as if they wrote it. Master Baiter´s for the last fourteen years has been your best source for Fishing Conditions, Reports and general conditions for the visiting and resident anglers in PV. Just another reason why our Motto is ¨We Won´t Jerk You Around¨…..