One thing about the world of fishing is you never really know what’s happening from day to day. Fish move, water temperatures change, nothing stays the same for long. Some days you’re all smiles, others you’re not. Those “demanding” to catch fish will rest assured there are fish to be had amigos. Now if you’re going to be picky, then you could get upset and still have a great day of fishing. For now some summer species are cruising Los Arcos making short day trips worth their weight in Dorado!

This past week we’ve seen some action happening around Corbetena, but not many boats are heading out this far as you can get the same species much closer in. Sailfish are not as thick as they were last week as water temperatures now are cooler than inside the bay. If you find yourself in this area use As a result is the entire fishing community is targeting other locations. Still there are the normal players of Jack Crevalls, Sailfish on an iffy basis, Dorado to 35 lbs are possible, but they’re also in closer to shore. Unless you’re looking for Cubera Snappers which are in the 50 lb range there is little reason to head to this world class location. Yellowfin Tuna in the 25 lb range are a moving target, in reality heading this way is not the best use of your fuel dollar, straight up amigos, that’s the deal! Apply this logic to El Banco and you’ll save your money.

Those looking for late, late season Dorado 25 lbs will still have a decent chance at the buoy at Punta Mita. If you’re looking for Sailfish or Striped Marlin, yes I said Marlin, six to ten miles off the point on a 300 heading northwest,  you’ll put yourself in the right place to maximize your chances. The down side is once again they move. Another downside is the water temperatures drop the farther you go from the shore line. That’s right the water is warmer in the bay, than outside the bay. It explains a-lot. Throw in Jack Crevalls running to 50 lbs, Bonito in

the 30 lb range, Skip Jack Tuna, with a possible Rooster fish near Sayulita and you’ll have a fun day with a shot at larger “wrong” season species. El Morro has 25 lb Football Tuna as well. HEY, give it a shot if nothing happens to your liking, come back in the bay and get some guaranteed arm burning action. One thing to remember if you’re seriously looking for Sailfish heading north of Punta Mita will just increase your chance of boating a billfish. But it’s fishing and it could turn up being a bad idea. Where there were Football Yellowfin Tuna around El Morro has fizzled out. But we’re seeing “some” Rooster Fish in the area and this is a favorite location for this demon species. So the entire area between Punta Mita, El Morro and the Marietta Islands are active fishing grounds and worth the time / money.

Inside the bay is surprisingly active. With water temperatures over 75 now in the bay, it seems most of the warmer water is in the area around Los Arcos. The bait available in this area is insanely abundant. Still seeing Krill Squid and Shrimp, red in color all over the place. Sardines, Goggle Eyes, Skip Jack Tuna, you name a bait, it’s out there. And where there’s bait, there’s normally fish chasing them. We’ve had Dorado in the 25 lb range up around Los Arcos. There are some deep channels in the area that make this spot exceptional in times like these. It’s winter fishing now, but with Sailfish and Striped Marlin in the area anything but anything is possible. Jack Crevalls are everywhere and here’s a secret, they’re full of eggs. This will explain the appetite they’ve had lately. Soon it will mean our “bread and butter” fish will not be biting as they lay eggs, stay tuned. Bonito in the bay is great eating and anywhere from 20 to 35 lbs. Sea Bass are still around the Ameca River at 20 lbs up. For anyone looking to catch fish and save some money, the a four our six hour trip in the bay can be as good if not better than the longer duration trips, so put the “little woman” in a spa and head out, buy the time she’s done getting “beautiful” you’ve be ready for that “beauty”! What you do with that “beauty” is up to you…ha ha. 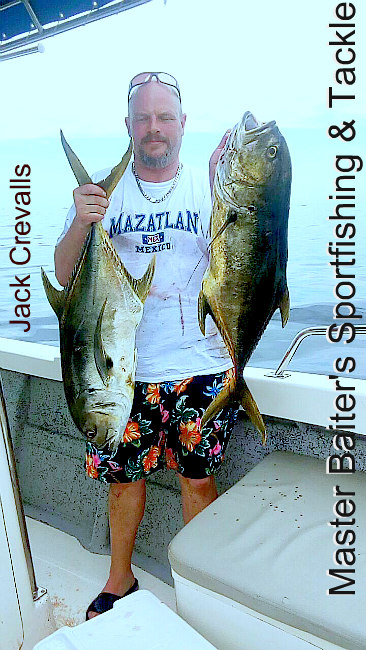 Water temperature are strange at best this week, in the bay it’s 72 degrees. Punta Mita is 75 degrees and El Morro it’s 72 degrees. Deep water locations are same range for now. Normally this is frigid water to these species, but when bait is everywhere, why leave? The Bite has been a little strange this week, it seems a mid-tide time is the best time to hit it hard. With a bite happening late afternoon it’s not the best idea heading out too early. I’d leave around 9, then the 1:00 to 3:00 pm bite is timed perfectly. So sleep in a bit and let the other guys miss the bite. Baits are an interesting subject this week. Seems dead Goggle eyes work as well as live bait for Sailfish right now. So put that bag of tricks to the test and see what happens amigo. Red colored lures are a good place to start!

2/14/2018 Nutshell UpDate: Ok, Jack Crevalls are all full of eggs so they’re hitting anything that looks like food.. Several Striped Marlin strikes lately about six miles off Punta Mita to the north west. Some Rooster fish around the Buoy of Punta Mita with Dorado. Jack Crevalls are in the bay like Ants, just millions in the bay and they’re hungry for now. Some larger Dorado in the bay running 40 lbs, surprising yet they’re there. Still some 25 lb Football Tuna at El Morro area. Not seeing too many Snappers these days… Fish are taking baits now easily and the fishing is improving for now. Not so “iffy” but it can still be frustrating. Good luck and have fun amigos enjoying the special moments of your life!