Everyear we come to expect certain things. But after a few years of really up-side-down fishing, I have learned, with many others, it would be easier to predict what my ex-wife was going to do next. Normally what is happening now, happens in April. Some days the fishing is incredible, other days will have you pulling your hair out. Having said that Striped Marlin are all over the deep water locations with Bull Dorado. 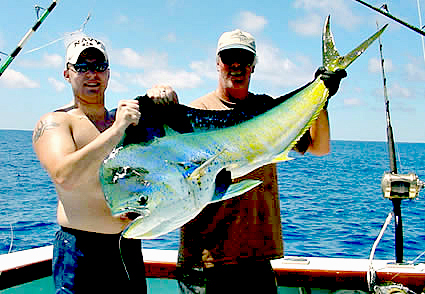 For now the fishing is great, but not every day. If you are looking for some real action you´ll have to hit places like Corbeteña, El Banco or the Tres Maria Islands, or in between! Basically there are Striped Marlin throughout the area, but not on the rock or on the high spots. But if you have a little fuel left in your tank, venture out a few miles to several and you´ll find Striped Marlin and may have a shot at a Black Marlin. Not that Black Marlin are prevalent, but water temperatures are climbing, as a result Black Marlin will increase by the week, I think.. Ok, I hope! Be patient. Also Bull Dorado are around the the area, especially if you can find a floating clump of weeds or a log or even plastic bag trash. Maybe if lucky, you´ll find a buoy and the Dorado will be abundant. But if you´re expecting this to be automatic, it won´t be. Cubera Snappers at both Corbeteña and El Banco if you don´t mind jigging. Bait is not an issue, in fact there is so much bait out there you may not find a bird interested in them. Not much else really to speak of, Spinner Dolphin have become sparse, so Football Tuna are out. The Tres Maria Islands are your only shot at getting any sizeable Yellowfin Tuna. Now you´re looking at six hours in one direction to find these explosive fishing grounds. So I suggest an overnight trip at the very least to use your best option. Multiple days are a better choice. If you are at Corbeteña and you´re heading to El Banco or vice versa, make sure you don´t just get there as fast as possible, keep an eye out for buys where there are Dorado Bulls that will amaze you. 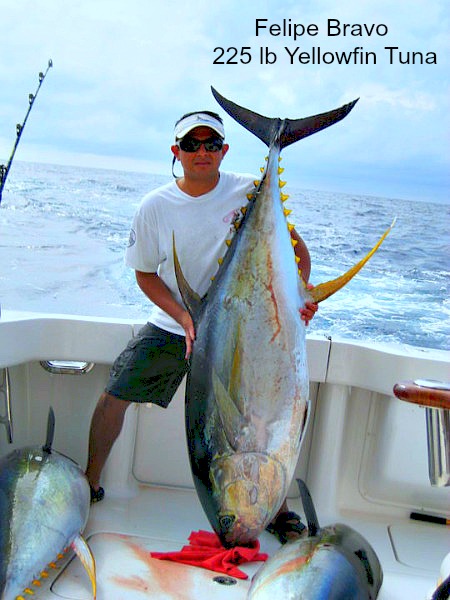 Inside the bay, the fishing is weak at best. With Needle Fish moving in they are the dominant species at this moment in time. Jack Crevalls have moved out mostly, you will still find some in the colder currents. Sierra Mackerals and some other minor species are available. Bonito, Skip Jack Tuna are at Yelapa. For now I would not suggest any trips under eight hours. Tons of bait everywhere, with no preditors.

The Marietta islands have signs of life, but it´s not going to impress the jaded. Skip Jack Tuna, Bonito, smaller Dorado, possible Rooster fish and a host of others to choose from, other than the longer distance locations, this is a good option. Plenty of bait in the areas, mid sized blue lures with tiger prints will work as well. But live bait is king amigo. Not many boats hitting these closer in areas so you´ll have the are pretty much to yourself, a real luxury if you ask me.  Then again as the seasons change, these fickle fined friends of ours can change their mind in a second as love and mating season is moving in. It will blow your mind to hit a fish in his head with a bait to have him ignore it worse than my ex ignores me! That´s brutal!

With tourism slowing to a halt, fishing is wide open with fishing companies begging for business. Just remember this is Mexico and you need to make sure the things you need are there. No radio, safety equipment and if they´re heading out at a slow pace, then you have a pirate boat. If there is no radio on the boat, but the captain has a cell phone, this is not acceptable. What is this guy going to do, call his mother in law to have the navy come find him?? If the boat can´t afford a hundred dollar radio, it will not be ¨alright¨. Especially  if you are taking family and they get hurt or worse. Be smart, be safe and don´t look only at price. Know where you are going fishing and only make token deposits. Half down can mean you just got screwed, especially if the price is too good to be true, let alone believeable. If you can´t find the guy at the meeting place in the morning, which is more common than you may think, greed got the better of you. Be safe and don´t let price interfere with safety! 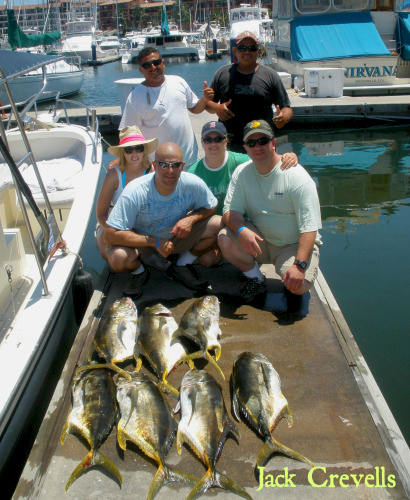 There really wasn´t much to report this week, we´re in a dull period before things start rocking again in mid June. With water temperatures all over the place and strong, conflicting currents, anything is possible. Bait is moving in nicely and the bay is just stuffed with bait fish. Not too many species seem to be interested in what the bay is offering for now. But the simple fact is whatever conditions we are having, it will be just a few days before everything changes again. So remember, fishing is a risk sport, you risk your money and time for the possible chance of a life time to boat that bucket list fish. If it was automatic, it wouldn´t be called SPORT fishing.