At Corbetena we have plenty of bait, perfect water temperatures and high visibility blue water you’d expect an abundance of Marlin, Tuna and Sailfish. But you’d be wrong. You see all these species are in the area, but there is no concentration anywhere. Also we’re finding that were “they” were yesterday isn’t where they’ll be today. What does this mean, well first off it means you’ll need a full fuel tank on the boat because you could be moving around the area a lot. It can be very frustrating and very rewarding for the guy taking a shot! Feeling lucky?

Corbetena has been less than exciting lately, but this week there was some signs of life with Blue Marlin in the 600 lb range. Yellowfin Tuna in the 150 lb range. Not many, but they’re out there, spread out and well they’re picky. With many different baits to choose from trying to figure out what they’ll bite is not easy. Cubera Snappers are here as well for the jiggers, but don’t think it’s automatic, out of ten boats in the area, two will catch fish so there’s the challenge. The area between Corbetena and El Banco is going mostly ignored, fuel cost being the driving factor. There are some channels and ravines that have been the area of many a tournament winner, but keep this to yourself, out secret! Not much news from El Banco, but frankly Corbetena has been the automatic choice these days. Worth a shot at El Banco, if you’ve got a full fuel tank.

The area around Punta Mita, El Morro and the Marietta Islands have seen some slight signs of life. El Morro this week was amazing productive, for a few days that is. Fish moving around the area means you have to check everywhere in the area. For now Dorado in the 25 lb range are being caught, but not daily. Marlin are about six miles off El Morro to 600 lbs with the possibility of Sailfish throughout the entire area. Punta Mita around any debris or trash line Dorado are possible as is Sailfish. Six miles or so off the point on a 300 heading you’ve got a shot at Blue and Black Marlin. Not that many being boated, but somebody is reeling one in right now. Feeling lucky??

Inside the bay is still the best fishing option for your fuel dollar. In fact this week we had a few Blue Marlin caught off the beach of La Cruz Marina. The Los Arcos area has been seeing small to tiny Dorado, but some nice 20 pounders are mixed in. So throw the babies back, keep the adults. Sailfish are also cruising the super abundant bait here and around the La Cruz Marina! Snook around the shore line, and at the river mouths. Jack Crevalls to 35 lbs are still running the area, even though they’re a “cold water” species. Throw in Bonito from 10 to 30 lbs are very tasty. Yellowfin Tuna Footballs around Yelapa and a host of other structure species as well.

Water temperatures are a perfect 85 degrees with blue water outside of the bay. With so much live bait in the bay it’s hard to suggest a specific lure or bait! Start with the Goggle Eyes, try lures, Cedar plugs are working, but switch baits every twenty minutes if nothing strikes. With the full moon you’d expect an early bite, but with the clouds at night and mornings the moonlight is making it to the water. Because of this the bite is around 10:00 a.m. so sleep in a little. You’ll have to work for the attention of these fish, but you’ll have a wonderful time in the bay and you’ll catch fish.

As I’ve mentioned recently we’re putting together luxury 2 ½ day fishing trips for only up to four people to the Tres Maria Islands. It’s a luxury trip with bells and whistles you won’t get on those cattle car boats stuffed with twelve people. For the person looking for world record sized Yellowfin Tuna, this is your trip. Right now at the Tres Maria Islands we’re seeing ever increasing amounts of Yellowfin Tuna bordering on world record sizes. It’s a First Class trip. Puerto Vallarta is known as one of the top ten fishing locations in the world, why not enjoy this journey with a world class organization. Oh, the entire crew speaks English!

Master Baiter’s now has two locations, one in Marina Vallarta and the other on the Malecon, next to Sr. Frogs under Murphy’s Bar. Remember at Master Baiter’s, We won’t Jerk you around! 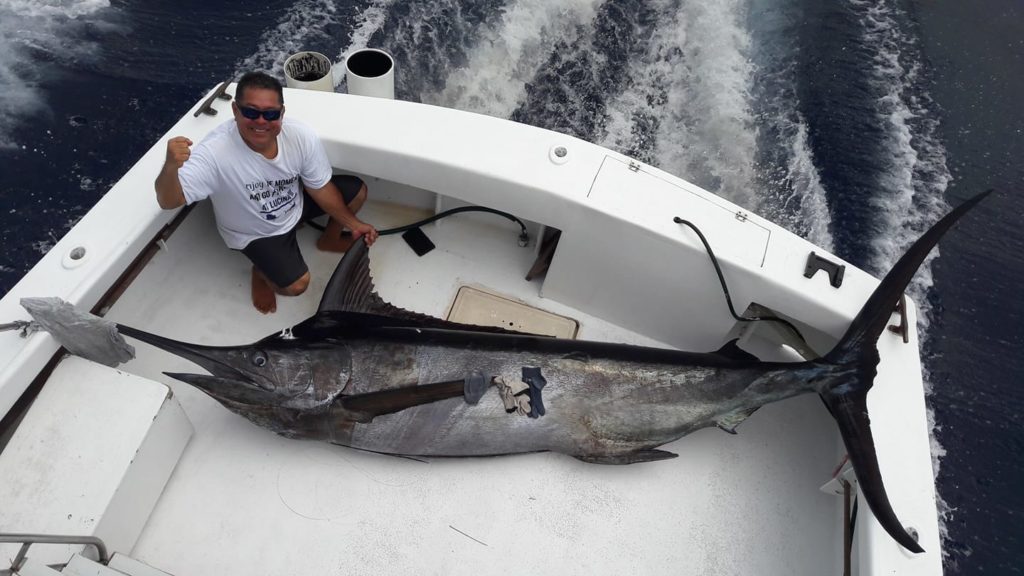