Over Abundance of Bait Creates Challenges 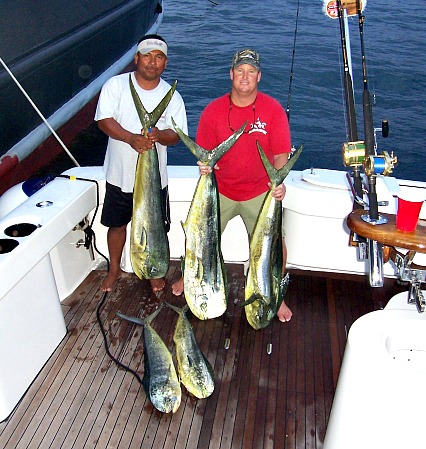 As we enter late June, we normally expect to see an increase in larger Gamefish. But before this can happen, there needs to be bait in the area. Once bait moves in, we see the larger Trophy sized Gamefish follow and that is when the World Class Species of Marlin, Tuna, Dorado, Sailfish, etc come to Puerto Vallarta or the Bay of Banderas to be specific. It´s a balance that happens naturally, when that balance gets weighted to one side, as in too much bait, then there is a lag time until the larger (or any fish for that matter) move in. This is the situation as I write this report, too much bait. I mean every bait under our Tropical Sun is out there in huge amounts! So what does this mean to you looking to boat Moby Dick, well it means you have to have patience and an experienced and equipped boat. You´ll find yourself going through every live or dead bait combination you can think of. You´ll be running every lure you have to see if this will entice the odd fish. If lucky you´ll experience about four strikes which will be your shot to boat a gamefish. Now before you decide not to go fishing, we´ve already seen a week or so of this and it can´t last much longer. When it all breaks loose, and we see the Gamefish numbers pick up, it could turn into something to remember. So don´t get discouraged, be patient, this will change soon.

First lets get into what´s happening. Corbeteña is your best bet for catching fish, this is a ten hour day and you´ll be in the neighborhood of Blue and Black Marlin in excess of 400 lbs. Dorado in the 45 lb range, Cubera Snappers in excess of 60 lbs, Sailfish and the list goes on. Now here´s a tip, Yellowfin Tuna in this area are bait sized at 35 lbs and under, no kidding. There are some occasional larger YF Tuna, but I wouldn´t hold my breath thinking you´ll be the lucky guy to boat one. An over abundance of Goggle Eyes, Bullet Bonito, Bullet YF Tuna, two inch Flying fish, Mullets and the list goes on. This is the primary challenge, getting these gamefish to turn their head.  El Banco, same situation, lots and lots of game fish, too much bait, it´s hard to get these fish to turn their heads when you´re just offering more of the same that they´ve been stuffing themselves on. 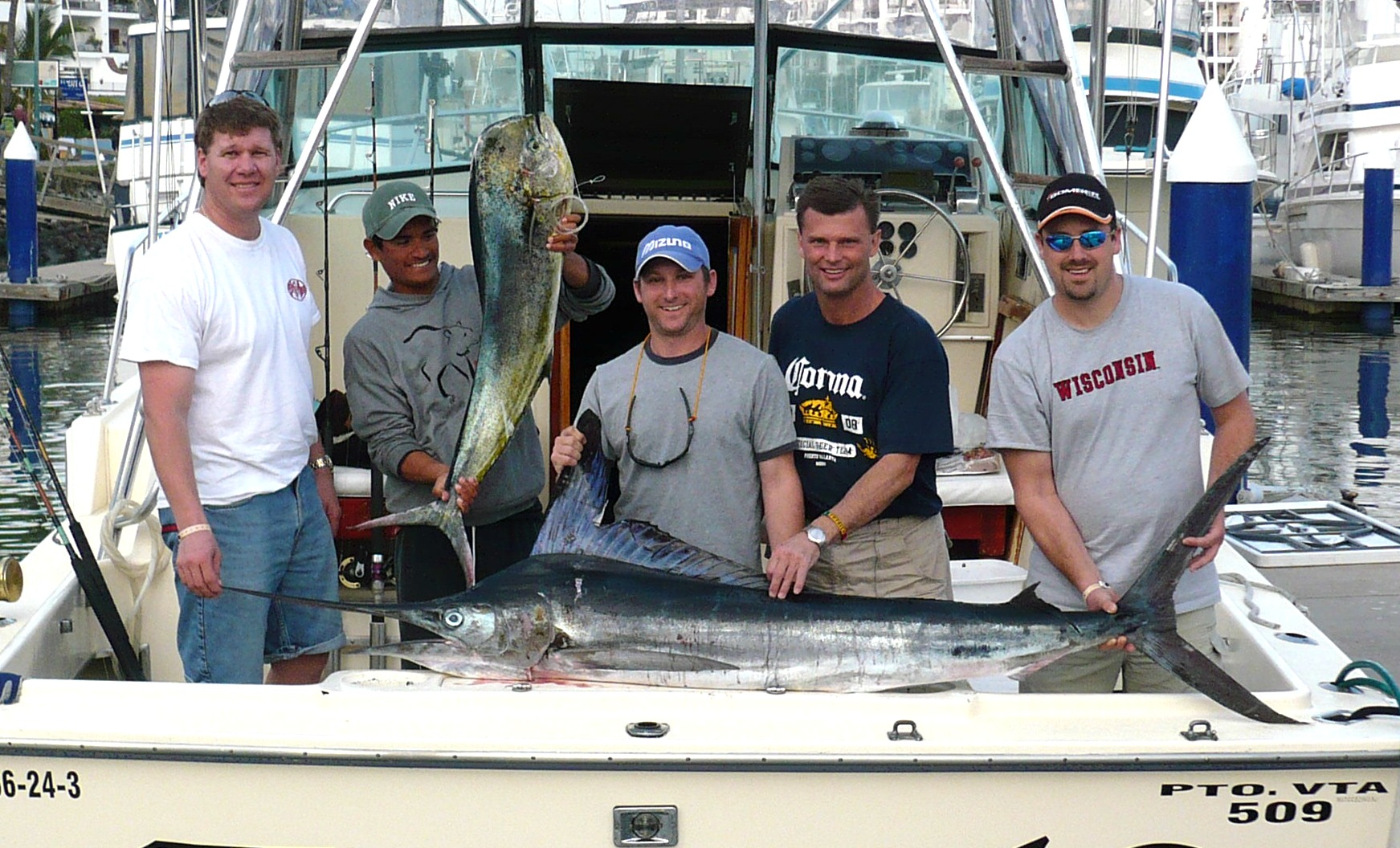 Right at the point of Punta Mita there are Dorado, Sailfish and inside the point you´ll find Jack Crevalls. Yes these winter species are hanging just inside the bay, why? Bait, plenty of bait and with the rain water pouring into the bay it´s a slight bit cooler regarding water temperatures, so strangely enough, we see winter species in the bay during summer! Same deal 50 / 50 chance, as far as fishing goes the deck isn´t stacked as we´ve become accustomed to, but that´s why you need better quality crews with plenty of tackle and a full measure of luck.

The Marietta islands have been taken over by Needle fish and not much else. Yes you´ll see Dorado in the 30 lb range, Sailfish in this area is automatic and that´s about it. Not much to tell, if in the area don´t be afraid to try the Anclote Reef area for snappers and Rooster fish which will hang in the area even if the Sardines are scarce. I should say Sardines are the only bait fish we don´t have in the area.

Inside the bay, well you still have the Trash Line to fall back on. With the rains picking up to almost a daily event in the evenings we´re seeing some murky water in close to shore as is normal. But the trash line itself is still clean and clear on the seaward side. Dorado in the smaller size range of 20 to 24 lbs are feeding on this line heavily. Bonito, Snappers, Needle fish, Skip Jack Tuna and other smaller species are chowing down on the roots and seeds. You have a decent shot at catching some smaller fish that fit well on your dinner plate amigos. I wish I could make this sound more exciting, but there you are.. Or rather where ¨we¨ are.

Ok, so what do you do, how do you combat this situation? This report makes it sound like there are no fish to be had. In fact it´s quite the opposite, we have millions and millions of fish in the area. It´s just they´re over feeding on abundant fast food. Running the local baits gives you the edge, but this only means they hit your bait and not the fee swimming equivalent next to your bait. So patience and a little luck will be the deciding factor of how your day will be…. 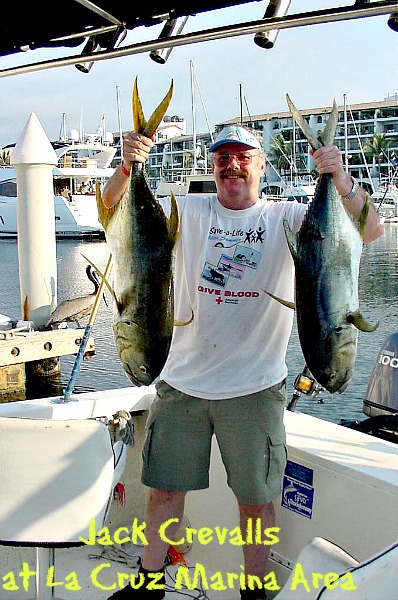 Water temps are perfect at 85 degrees, the water is as blue as it gets and of course bait abundance is the problem. The bite is inching its way into the later morning, so sun up bites are not happening at the moment, but you don´t want to be at the fishing grounds too late, figure being where you want to be about 8 ish and  you´ll be fine. The afternoon bite is still about 2:30 so plan accordingly.

Fuel cost is a major issue when trying to keep cost down, but boats that focus on fuel usage is not always the best choice for serious fisherman looking to move to the next area is nothing is happening where you are. Of course this means the slow boats don’t move fast or often. Make sure you´re paying enough money to get from spot to spot and not just sitting and fishing a dead area because the boat owner will kill the captain if he uses excessive amounts of fuel. To me this is offensive, you pay for fishing, if it cost too much for your budget you should choose a more affordable option when the boat will use fuel and give you the best opportunity to catch fish. Enough Said….

For now if you´re serious about catching fish and taking a chance of catching few fish, maybe none, Corbeteña is the best option for now. You´ll find fish, that´s not a problem, turning their heads is another issue we don´t normally have….

For the record, I struggle with good days and bad days like everyone else. We as a company want to tell you that you´re going to catch Moby Dick, but when he´s not around it´s also our responsibility as a reputable company to tell you the fishing is less than perfect. We will focus on the positive as we should, but we won´t duck the bad and promote the false just to get your business today. There is always next year or next week. Either way we have been burnt by those who will tell you Moby is in the bay before we became a world class fishing company. So you can rely on the information in these reports to plan your day on or your day off the water, but we won´t be blowing and smoke up your backsides…. Enough said..