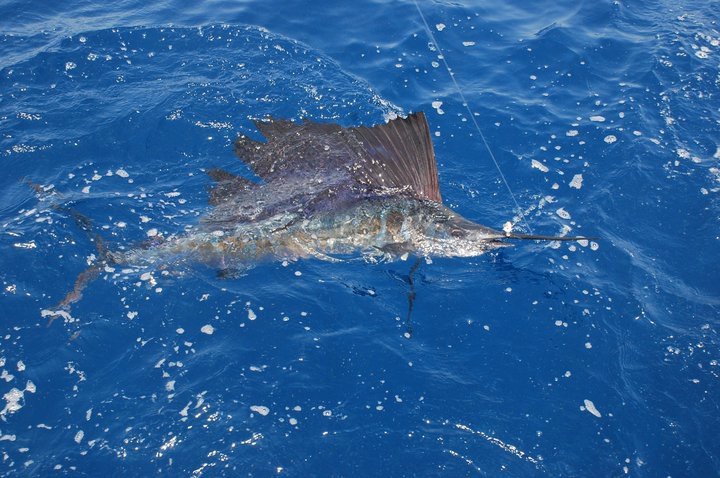 Just when you think you have things figured out, all tied up with a nice fish bow, everything changes. You’ll find Marlin at the deep water locations here in our world class fishing grounds. Then again, you could find a freak Marlin around Los Arcos. With Massive amounts of bait moving into the area as is normal for this time of the year, freaky fishing is possible. Now you may say “What does that mean”? Well when you see a 600 lb Blue Marlin boated in the bay, that’s “freaky”.

As the opening paragraph indicates the fishing is erratic and unpredictable these days. The main reason for this is the massive amounts of Krill Squids of half an inch in length. But there are still incredible amounts of Flying fish, Sardines, Goggle Eyes and the list goes on. Because of this you could possibly find larger species in the bay than at Corbetena hitting a freak Marlin! Now you can’t plan on any of that so if you’re looking for Marlin you’re still better off taking a ten hour trip to Corbetena. In reality anywhere between Corbetena and El Banco can produce tournament winning sized fish, it just depends on how lucky you are. Many people seem to lock themselves into this idea that it’s either El Banco or we’ll go to Corbetena looking for world class species. The local secret is that anywhere in between these two locations are fertile fishing grounds. Ten miles off the rock heading north you’ll find a deep canyon that has produced many a tournament winner. This area right now could be better than El Banco or Corbetena on any given day. For now this entire area, including El Banco (which is nice to finally talk about) is alive with Black Marlin to 400 lbs and Blue Marin in the same size range. Sailfish are roaming everywhere and you’ll also find Dorado from 15 to 30 lbs here as well. My prediction is a Ten hour fishing trip will most likely put you on a Blue or Black Marlin, then again my crystal ball is a little murky. 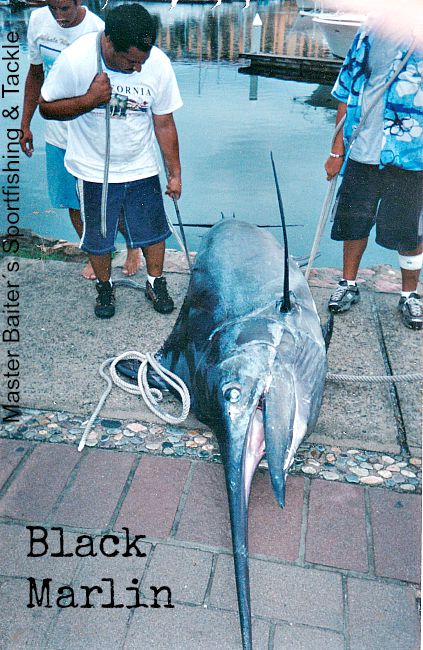 The area from El Morro to the point of Punta Mita is alive again with Sailfish and Dorado to 25 lbs. The area off Punta Mita has shown signs of Rooster fish in the 40 lb range, but again nothing is predictable and the surf line will always have Roosters. If you hit one it will most likely be smaller if at all. Then again, anything is possible with the Sardines moving in. Some Striped Marlin have shown up lately right on time running in the 250 lb range. With eight hours you can most assuredly find some arm burning action.

Inside the bay is where we are finding surprises daily. Sailfish of 100 lbs have been caught here in the last week. One freak Marlin this week was at 600 lbs which was caught over the channel at Los Arcos Rocks! Highly unusual, but again with massive amounts of bait it’s not that surprising. Needle fish are now in the bay anywhere from 20 lbs to 35 lbs. Strong fighters, they’re a little weird looking with a small bill like a Sailfish would have. Jack Crevalls are around the rivers and moving into the middle of the bay chasing bait. Sierra Mackerels are delicious but normally not much larger than 20 lbs, don’t pass them up as they’re great eating. The area around La Cruz marina has been very active and some days it’s been on fire! For now anything is possible in the bay and short day trips can produce memories for a lifetime.

Water temps have been up and down. Last week we had 87 degree temperatures at Corbetena, this week it’s 84, a significant drop which is more comfortable for the local fish population. Inside the bay it’s a brisk 82 degrees as the whales like it. When it comes to bait in the bay, when we see the Whales we know we’ll have what I call feeder baits. Krill squids and shrimps of half an inch in length are like clouds in the water. Sardines are moving in with bait balls the size of a Mack truck drawing attention. Flying fish are near the Point drawing in every hungry fish around. The bite has been a moving target as late, so be where you want to be by 8:00 a.m to be safe!

Please remember to subscribe to this weekly article so it comes to you directly. We also sell Tours for all the local activities. For those interested we’ll “Smoke” your fish, give us a few days and you’ll be returned half of what we’re given, the other half is payment to the guys smoking the fish… As a reminder we have two locations now, one on the Boardwalk and the other is still in the heart of Marina Vallarta.