Marlin, Sailfish, Dorado, They´re All Out There, Bait Issues! 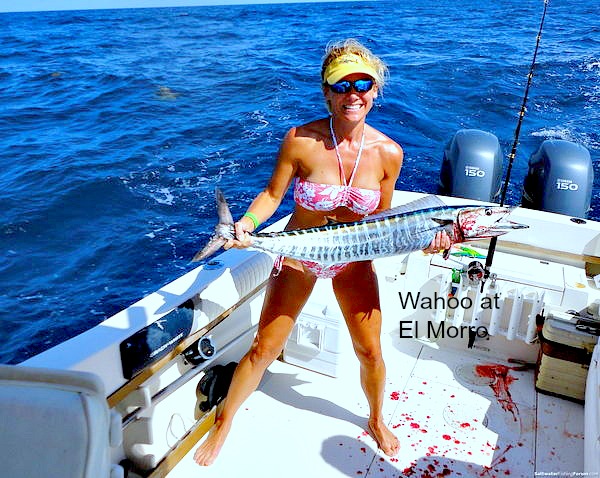 This week we pick up where we left off last week. Things are pretty much the same with some small differences. We still have fish, tons of fish, we also have tons of bait and there lies the problem. It´s a bait factory out there, you name the bait, we´re sporting it right now! Blue Runners, Sardines, Flying fish, Bullet Skippies, Krill shrimp, Krill squids (1 inch), Google eyes, Skippies and who knows what else. The full moon isn´t helping things either, when you have a fish looking upwards at a light backed surface they can see everything with their razor sharp eyes. It´s wholesale fast food and it´s easier in the early morning and later afternoon to early evening as the bite is a little strange. But if you follow what I’m saying, then it should help you be one of the ¨lucky¨ few…..

Inside the bay things have gotten a little weird on the positive side. The biggest surprise has been big bull Dorado hanging around the south end of the bay close to the beaches. That´s the good news, the bad news is you can drive yourself crazy, nothing more frustrating than having a Bull Dorado in your ¨reach¨ just to have them ignore your bait! Also in the bay area Skip jack Tuna to 30 lbs, Bullet Bonito, Bonito of the Arctic variety, and Snappers to 30 lbs with the average in the 15 to 20 lb range for now. Needle Fish to 40 lbs, Jack Crevalls from 20 to 50 lbs, Snook at the river mouths for the lucky few targeting them. Four hour trips have been hard on the captains with fish ignoring baits, but there are fish to be had and normally these conditions will only last a few days. So stay tuned, things can change faster than my ex-wife’s credit limit! 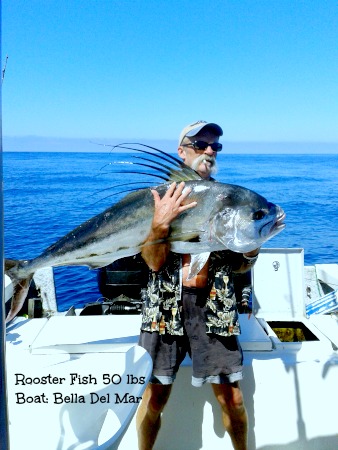 Outside of the bay we´re still seeing some nice sized Wahoo, but remember these are not schooling fish and hitting one is a matter of luck and skill combined. Wire leaders are suggested, but line shy fish will avoid visible line or wire leader, so it´s a double edged thing. Having said that off El Morro and the Marietta Islands we´re seeing 40 to 60 lbs Wahoo striking baits and lures alike. Rooster fish are moving in around the ¨Islands¨ running anywhere from 30 to 50 lbs or larger, but again, you need to figure out a way to turn their head. Other players in the area are naturally Skip Jack Tuna, Bonito, Needle fish, newly arriving Snappers to 30 lbs and of course the list goes on. One thing we do appreciate is the arrival of Pámpanos, aka Cookies, they´re great tasting and they´re around the islands. They are taking bait and they´re one of the few that are. Great tasting, it´s not unusual to boat forty, but make sure you throw the babies back so they can live to see another day and we can continue to enjoy they´re March arrival. Eight hours is probably your best fishing bet at the moment, but for those looking for larger fish, then you´ll be looking at Corbeteña or El Banco.

Speaking of Corbeteña and El Banco, our world famous fishing grounds, we have Black and Blue Marlin ranging from 300 to 450 lbs. Strange stuff in deed for March, so it´s a weird world we´re dealing with out there. Same situation, early morning bites, bait overload with a heavy measure of frustration is the order of the day. You have a shot, not a great shot, but hey, fishing is fishing and if all you´re going to do is play the percentages then you´ll never get that finned fantasy I speak of. So take a shot, hit it for ten or twelve hours and if you don´t get a strike head to the islands and hit more abundant species like Pámpanos, Roosters, Snappers or Skip Jack Tunas. 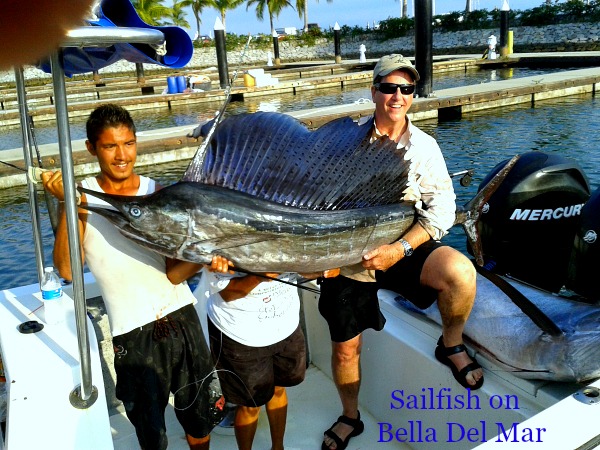 One thing we´re seeing is Barracuda moving in to the area in larger numbers around the Marietta Islands. Individually Barracuda are not a threat or danger in the water, they look a lot like a Wahoo. But in mass or larger numbers they will attach shinny objects like Lures or a persons wrist watch which happens to be connected to you at the time. Seriously, if you´re snorkeling in the water and you see a school of Barracuda get out of the water or at the very least make sure you don´t have jewelry or shinny stuff on. Just a friendly warning that hopefully is unfounded.

We have beer coolers or Koozies in the shop right now, they´re five dollars, not cheap, but they´re being shipped down from Oklahoma, so we have to deal with all those related expenses, but we have them and they´re cool. Be warned, it says ¨I Master Bait¨ on the bottom when you tip your beverage up.. ha ha ha….

We´ve opened a second location at the intersection of Insurgentes and Basio Badillo in Old Town in the old Casa de cambio location. It may be easier to explain the location as on the road that goes to Conchas Chinas. You´ll know us by the huge fishing mural on our new location. We´ll be booking charters, Tours and selling our world famous T-shrts, hats and assorted products. Come by, say hello to Michele. If you´re a legal citizen, Caucasian(ish) and need a part or full time job in a fun environment, contact me and we can talk. 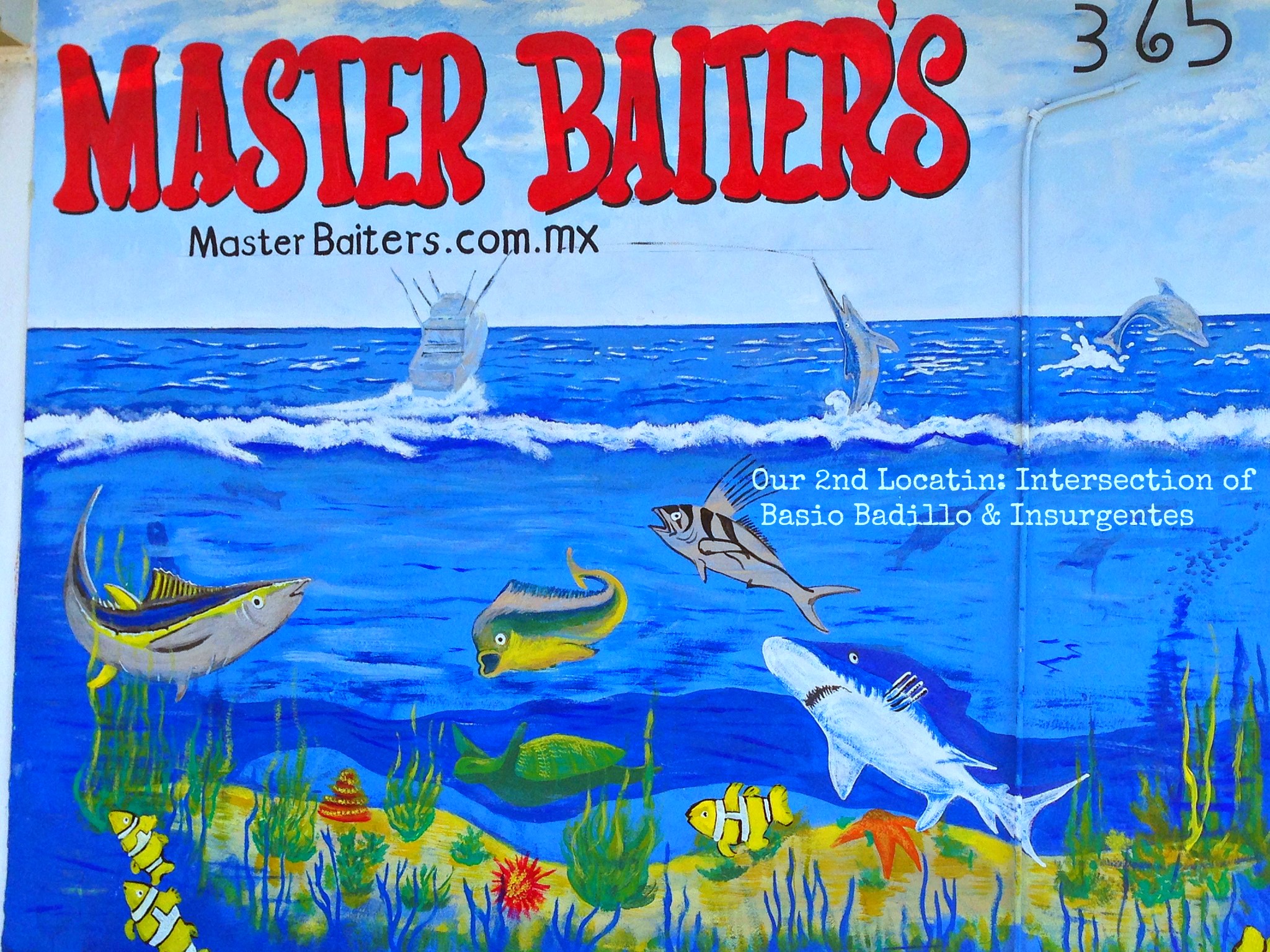