It´s been another interesting week here in Puerto Vallarta´s Fishing grounds with Big fish and big challenges. For the last couple of weeks Corbeteña has been the place to be, unfortunately the Porpoises and Lemon Sharks are of the same opinion. What does this mean, well for one thing you´re playing cat and mouse with the porpoises or Dolphin of the flipper variety. With all the bait in the water you´d think making bait (catching bait) would be a no brainer.  But in fact once you´re past the Marietta Islands you better make bait or you´ll have issues (like I did the other day). With Dolphin in the area they love to get your free offering and they take it up to the hook! Shark are there as well, but you can´t see them, they´re below the surface and they´re just sniping your baits. You can always tell it was a shark when they rake the leader and the line has little curly curls like butter does with a butter knife. If you can get bait at the rock, you can but it´s time consuming! If you can get a bait around these ¨challenges¨ then you´ve got a decent shot at big Blue Marlin or Big Black Marlin. We´ve been hoping for larger Yellowfin Tuna, we had a few over 180 lbs boated last week, but again, you have got to get the bait to them. There are always Cubera Snappers, but again, challenges. As far as fish go you don´t have many options at Corbeteña. Now if you ask me what´s happening at El Banco, I can´t tell you. Nobody is heading out to this area since the action has been so reliable at Corbetena. Now don´t get the wrong idea, it´s not a cake walk at

Corbeteña, out of four boats (only four boats the other day) three got Marlin Hook ups and they were boated at 600 lbs approx. each and one over 500 lbs. You´ll get a strike, but you´ll also spend the whole day trying to get one of these finned fantasies so be patient. The Marlin were mostly caught on lures, one on live bait. If running lures in this area make sure you are using Guacamayos (orange, Green and Black stripes at the top), Petroleros (Green, brown and purple) or Iguanas (Breen, Black stripes, yellow belly. Start with these lure combinations, I would be running at least two, maybe three around Corbeteña.

For the moment, the area twelve to fourteen miles north of Corbetena are some channels where there is always tons of bait and the fish density is pretty good, I think you have a better chance boating a big Marlin in this area, so another option especially if bait is an issue! Damn porpoises… 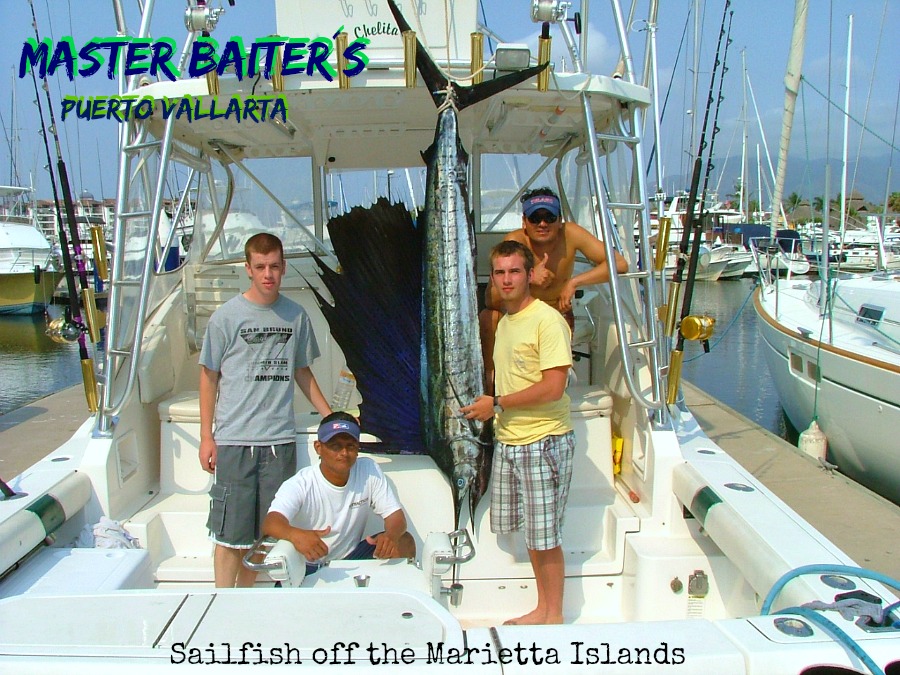 Just west of El Morro and the Marietta Islands we have been seeing Sailfish action pick up a little, but half way to Corbeteña they´ll be dropping off. Striped Marlin begins eight miles off the point of Punta Mita and from that point out anything is possible. So don´t jam to Corbeteña and then wonder where the fish are, they´re all over the area, drop baits early and pay attention, be ready, when they strike you have to act quickly or they´ll drop the bait, happened to me twice yesterday, nobody determined who would take the pole first, beginner mistakes for sure.

Around El Morro, Punta Mita and points west you´ll find Sailfish, Striped Marlin. Farther out the Black Marlin and Blue Marlin are picking up the slack. For now we have seen no Dorado, Jack Crevalls are still around but they´re thinning in numbers. Bonito are always here, Snapper around the reefs and structure. All and all the fishing this week is all about Marlin and Sailfish if outside the bay.

Inside the bay we´re still dealing with the Rains, the trash line and the weather. We´re seeing lots of tropical storms, which means unexpected and unpredicted rains of decent intensity, in other words it pours like Louisiana!  Jack Crevalls everywhere, Snapper and Snook at the river mouths and they´re good fighters and tasty! Bonito, Skip Jacks for sure. Sails are slowing down a bit, but the rains are back so this will draw in more sails, which is already a freaky situation. Smaller tuna around yelapa with a host of other species to choose from…. With the rains and the trash line comes dirty, coffee colored water. Don´t be alarmed, this water is just a few feet thick and  you´re captain should be running a planer to get baits below this brown coffee water. It´s basically blue and clean water under the surface, so don´t flip out, its part of the plan!

Bite, with the full moon on it´s way you´d think it would be getting earlier and earlier in the day but that´s not the case. for the last couple of weeks now the bite has been after 12.00 PM or early, early afternoon. The bit has been going until after 6 pm so getting to the fishing grounds early will not do anything for you so use this information wisely, give yourself the best chance to boat something memorable! Water temps are still at 86 to 88 degrees, in the bay with all the cool rain swollen rivers you can expect this. Live bait is always king, but in the bay you may want to run the same lure colors to catch Marlin at Corbeteña here they are again: Guacamayos (orange, Green and Black stripes at the top), Petroleros (Green, brown and purple) or Iguanas (Breen, Black stripes, yellow belly. Start with these lure combinations. Also pink and white combinations worked well on the hoochies the other day so something to think about.

Master Baiter´s just got another freezer so this means we can once again Freeze Your Fish! Master Baiter´s clients get this service for free, non clients will pay $150 pesos ($7.00 usd each bag) and can rest assured it won´t be stolen by the concierge, bell boy or anyone passing your fish in the freezer with sticky fingers. And of course we´re the only ones offering this service in Marina Vallarta that I know of. If you get ten bags of fish it makes us the cheapest fishing company in Puerto Vallarta.

I also have a new, smaller panga with a super superior captain and for the next two weeks I am offering this 26 ft Panga for four hours at $200 usd which is at a loss for me, but we´re introducing this panga so we can earn your business in the future! But you have to mention you read it here in this article to get this deal or mention you read this in the PV Mirror (www.pvmcitypaper.com ) !!

Smoke Your Fish: As another exclusive service of Master Baiter´s we´re offering a Fish Smoking Service where we´ll smoke your fish, bag it and prepare it for shipping, we take half for payment. People are loving this service and frankly I love the taste of smoked Marlin / Smoked Sailfish, Dorado, Rooster fish or any other fish you catch. Even Jack Crevall taste good smoked!! Just call us and we´ll come to the boat and get it with instructions on how to reach us, we´ll deliver it a few days later or trade you what we have in stock, but not the day of the trip amigo, call us, we´ll fix you up! I can´t tell you how good this is with a beer!!

July Fishing Special: Right now we´re running a special for the month of July, 4 hrs, four people max, Ice, bait, captain, crew, licenses, on insured boats with English speaking captains is only $250 usd for a ¨Full Service¨ fishing Trip. Option II: For those looking to just get on the water and do some basic fishing our 4 hr trip from Marina Vallarta to Los Arcos trolling for smaller game fish is only $195 usd, four people, same as the 250 trip but you´ll be limited on distance and how much fuel we use. Air fares are cheap, hotels are all running specials and the fishing grounds for the most part is still empty.