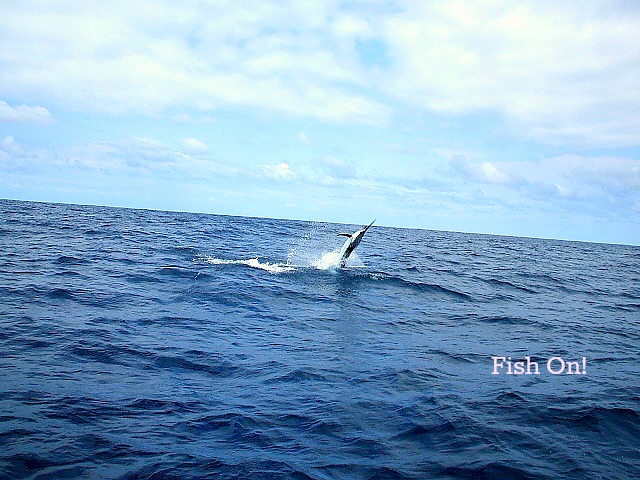 As we move deeper into summer fishing, we are seeing an increase in the number of Black and Blue Marlin (300 to 450 lbs) moving into

the area. But it´s been a weird week. The seasonal rains we expect three to five nights a week have been non-existent. Yes we do get some rain, but nothing like what we´re used to which of course means the famous Trash Line for the most part isn´t there. Yellowfin Tuna in the larger size ranges have not shown up at El Banco or Corbeteña as we normally expect to see starting mid August. We´re still a little early, but when you´re looking forward to something, that time never seems to come quickly enough, Christmas for your kids would be a great example. But we have some world class fishing happening right now, they´re taking baits nicely which of course means you have a great opportunity to boat a world class fish in our world class fishing grounds. Summer is exploding, the only thing missing now is YOU. 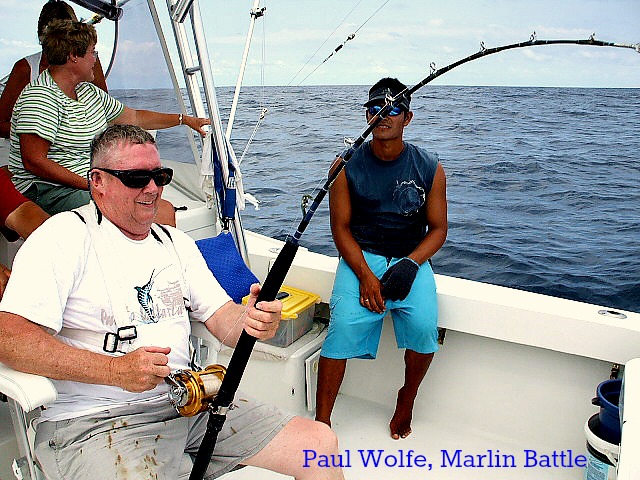 Lots to talk about this week so lets get to it, first, Sailfish are everywhere and I do mean everywhere. If you don´t want to catch a Sailfish you may have a hard time keeping them from your bait. Corbeteña, El Banco, El Morro, Punta de Mita, La Cruz, hell even Los Arcos has Sailfish in the bay. They have more or less taken possession of all the fishing spots you can think of except the Marietta Islands and that´s because nothing is at the Marietta Islands for the moment. I have people tell me all the time they don´t want to catch another Sailfish! Well amigo, we can´t stop them from taking your bait and in reality, what´s the problem? These are big fish, they fight well, very airobatic (I made that word up), which means they´ll jump a lot for the camera. They don´t take hours to boat and of course you can release them and then catch another. How can you go wrong? So don´t be surprised if Sailfish are in your near future! 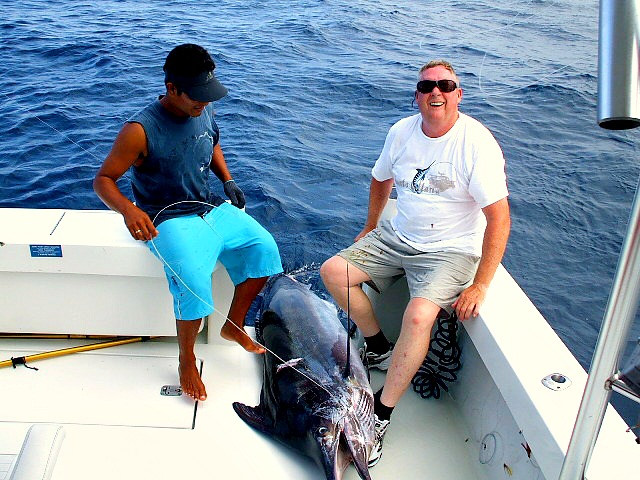 El Banco has been taken over by both Sailfish and Black Marlin in the 450 lb max size range. No Dorado, No Yellowfin Tuna. Nope, it´s pretty much just about Marlin and Sailfish. Rainbow Runners which are good tasting and fun to fight are also running in the 45 lb range. With plenty of Chorras (Skip Jack Tuna, Bonito and Calif. Mackerals) are abundant and working. If Sailfish are your target species, El Banco is a little far to go, But Marlin and Sailfish in the same place at the same time makes El Banco or The Bank the place to be, finally!

Corbeteña is a little different that El Banco this week. Yes Corbeteña has Black and Blue Marlin as well, but for some reason not in the same numbers as El Banco. Sailfish are here, naturally. Now if you like Cubera Snappers to 70 lbs then Corbeteña is a great option. Now Corbeteña to me is the most versatile 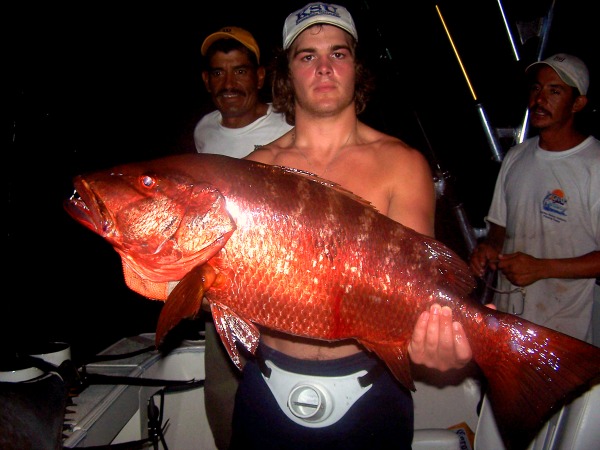 and reliable area we have, that for me it´s the ¨go-to¨ Fishing Grounds here in PV. Now the Cubera Snappers are not taking trolled baits, but a wounded Chorra, or half a Chorra dropped to about 150 feet will be enough to draw them out of their ¨holes¨ and take your presentation. Fun to catch, great to eat, just remember to keep your hands out of their ¨Raker Gills¨ which have spikes on them. I grabbed a Cubera to get a picture taken, the first Cubera I ever boated, got those gill spikes in my finger tip and hands. It was ugly, painful and it took a long time to get the ¨quills¨ out of the skin and it took time with the doctor. So be smarter than I was.

Punta de Mita, what can I say, the song remains the same. Dorado in the smaller size ranges from 25 to maybe 35 lbs, Sailfish everywhere, plenty of bait. Worth the time, but for now Corbeteña is your best option. If you´re staying in Punta Mita a beach panga would most likely do the job for you at a fair price. Just remember beach boats for the most part are going to be void of insurance so if there is a problem, you´re on your own amigos.

The bay is still abundant with two of our primary winter species, Jack Crevalls and Sierra Mackerals. It seems the area around La Cruz in the northern part of the bay is abundant with these strong fighters. Great for family fishing, they´re not exactly good tasting, but the crew will take them home to their wives and make a spectacular meal from them. 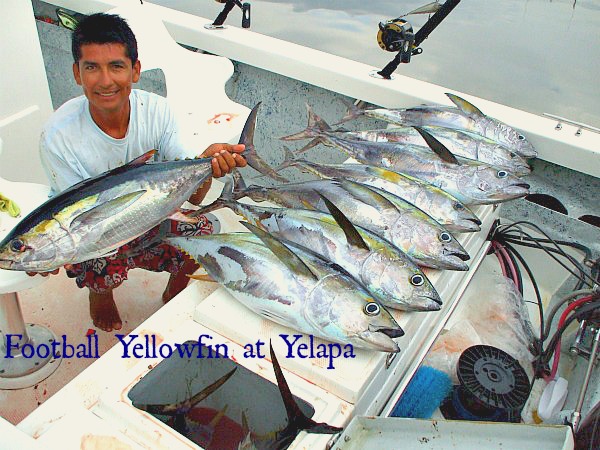 The Trash line is something we expect to have on a daily basis at this time of the year. But we´re seeing unusually low amounts of rain.  In the area so we have a Trash Line when the rains favor PV. But even with the Trash Line, the Dorado feeding are smaller than Goggle Eyes that we use for bait. Bonito, Skip Jack Tuna are thick from Los Arcos to just south of Yelapa and is a great option for a short day with plenty of arm burning action. Remember they´ve boated some Sailfish in this area as well, so anything is possible. Four hours will do you, but I suggest six hours for only fifty dollars more.

The Marietta Islands, forget about it! For some reason the only species you´ll find there are Needle Fish, Jack Crevalls, Bonito and Skip Jack tuna… Maybe. I say maybe because from day to day things can be completely different and why spend the money on a ¨Maybe¨. El Morro, just a few miles to the south are still showing abundant Sailfish as well, so you have options if in the area. 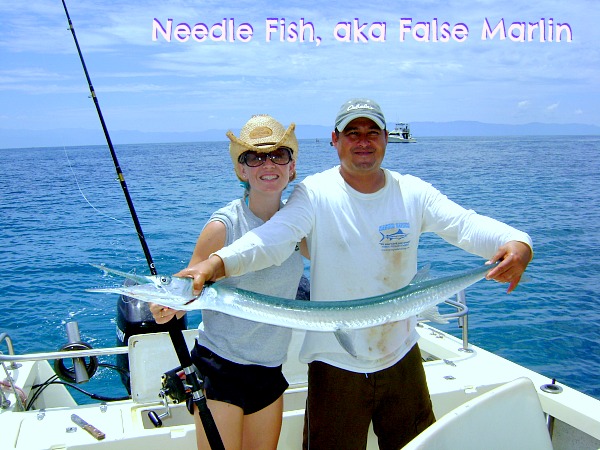 Live bait is still king, but lures are working also. I always suggest running at least one lure in your pattern. Petrelaros of mostly brown and purple are working well. Any lure you have with purple, green or brown combinations with flecks of color will work well in the three to six inch lengths. Dead bait for the moment has no appeal with the varied baits available in the area. Not much different in this arena from last week

The bite has moved to be a bit earlier in the day the last few days. I suggest being at your chosen fishing area by 08:30 a.m., then again in the afternoon around 1:30 p.m. Ocean Conditions: are basically perfect, blue water, plenty of bait in the form of Chorras, Goggle Eyes and flying fish. Water Temps: inside the bay the water temperatures are still running 86 degrees which is actually perfect. But outside of the bay, at El Banco and Corbeteña you´ll find water temps in the 91 degree range, this is too warm. Marlin and Sailfish don´t mind the warmer water temperatures, but when it comes to Yellowfin Tuna, now that´s a different story. You may ask what this means? Well Yellowfin Tuna don´t like the water this warm, but they´ll hang in the area if there´s bait in the is plentiful. So they go deep or as we call it, they ¨sound¨.  YF tuna will use the depths to regulate their body temperatures. This is why electronics on your boat is so important, you need to use the sounder to find the depths of where the Yellowfin Tuna are. You´ll need down riggers to get baits to Yellowfin Tuna, remember it´s dark at 100 feet or so, so you have to put the bait practically in front of them, and if you set the depth too shallow or too deep, you´re wasting your time and essentially fishing blind. It can work, but mostly it won’t, just depends on how lucky you are.

If you don´t know it, Mexico has adopted a policy of increasing the cost of fuel monthly to pay for Refining plants and infrastructure. What does this mean to you as a consumer, well it means things are more expensive by the month. Things like food, transportation and of course fishing. With fuel being a basic expense on fishing companies the pressure is on to do what can to keep expenses down. World Class Sportfishing prior to 2001 was considered a rich man’s game. With the general population flush with credit the fishing industry took off. Post 2008 everything jumped in price, things like Insurance, fuel, cleaning supplies not to mention dock, water and Electricity it´s difficult to keep cost down to affordable levels. Throw Captain Salaries (better captains cost more), First mate salaries and then a profit margin that keeps the family in Hot Pockets is becoming more and more difficult. The local owners have kept their prices flat for months now as cost soar. Many (almost every company) are heading out to the fishing grounds at a much slower speed to keep fuel cost down. This of course means less time with your line in the water fishing and longer travel times to the fishing grounds. Or you pay premium boat prices delivering an expected product for more money pushing the competitive envelope. With pressures to keep pricing down, the normal cruising speeds are lower by the day. Heading out to the fishing grounds at twenty five miles an hour looks to be a thing of the past for our average client. While cheap boats may be attractive, the product being delivered looks much the same, except you get less time fishing for your buck and frankly that is what you´re paying for. If you´re looking for the cheapest boat to go fishing, you have to accept these facts and not complain. Basically the industry flush with clients with credit lines to the stars before 2008 has come to a crashing halt. It´s all coming down to companies like Master Baiter´s to figure out a way to get the clients a quality product at prices they can find attractive. I have several ideas, I´ll be making an announcement on our new pricing structure shortly, Stay tuned…