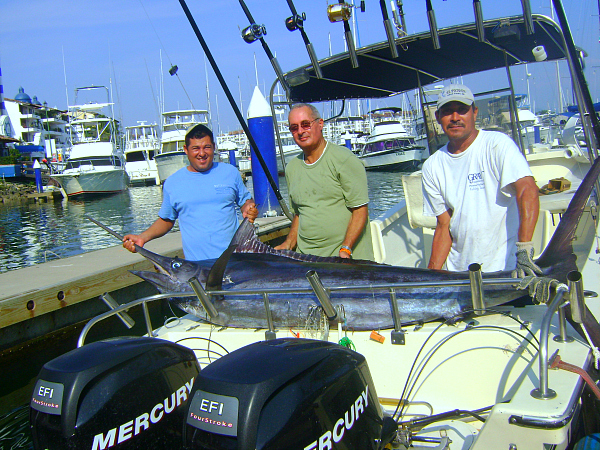 It seems that we can fall into a pattern here in Puerto Vallarta where it seems like my weekly fishing report will sound much like the week before and this week is going to be the same. But it´s not like that is bad news when the fishing is great and there are plenty of fish to be had. Every Species we´re famous for in PV is here, working its ¨tail¨ off and chasing bait. Marlin, Sailfish, Dorado but forget larger Yellowfin Tuna. But you´ll have to get out of the bay to get your targeted ¨finned fantasy¨. We´re also smack in the middle of tournament season, and why would you schedule a tournament in anytime other than Fishings High Season?

Let’s start with the bay, our famous Bay of Banderas. First say good-bye to the Trash Line. The seasonal rains have all but come to an end as is normal as we enter the early weeks of October, but by mid October the threats of Hurricanes may not be gone, but they´re pretty much done for the year. So we don´t get the extra little attraction of easy fishing, but that doesn´t mean the fishing is any worse. Bonito to 35 lbs, Jack Crevalls to 40 lbs, Yellowfin Footballs around Yelapa and yes, even Sailfish in the bay! Four hour fishing trips will produce, but six hours is better since you may need to spend some time and fuel looking for finned pay load.

Once you´re at the mouth of the bay, the possibilities step up a notch. Anywhere from El Morro to Punta Mita is a wide open watery field of Sailfish and Dorado. With tons of Flying fish and ¨Bullet Bonito¨, a favorite bait for Marlin and Sailfish you can´t go wrong. Dropping lines as you exit the bay in any direction will produce arm burning action. Sailfish are a touch smaller this week in the 30 to 35 kilo range or about 80 lbs in average. Not exactly tournament winners, but they´ll be in the hunt. Dorado, anywhere from 20 to 35 lbs if lucky. It´s not exactly Dorado City out there, but when you´ve hooked-up and you´re in the battle, the only thing that matters then is boating that gold and blue dinner special.

So there you have it in a nut shell, great fishing is not only a state of mind, it´s sore arms the next day. Fishing is mostly about the conditions and conditions are as good as they can get! Water temperatures are a perfect 84 degrees with perfect blue water. Clean, clear and high visibility blue water, combined with preferred baits like Flying fish, Bullet Bonito, 25 lb Skippies (Skip Jack Tuna), Google Eyes, and who knows what else is on the fish menu, but it´s all good! The bite is happening right now (as this article is being written) from 8:30a.m. to just after 1:00p.m.. Plan your day accordingly. If you´re looking to run lures, and you should run at least one, make sure it´s a pink and yellow combo or a petrelaro or something with purple in it (Marlin are diggin the purple right now). So there you are, I can´t believe I got this report finished with so few words, my publisher will love me this week!