It´s been a weird spring this year, we´re seeing cold currents mixed with warm water, now we´re seeing warm currents moving in which has raised the water temps to the 79 / 80 degree mark. But in the bay we´re still seeing water temps at 75 degrees. We´re in a funny situation, we had warm water all winter, at the end of April we had a chilled current move in, water temps dropped. Now we´re seeing warm water currents moving back in as we would normally see about now. So what does this mean to the local fishing? It means we´ve got a mixed bag and what you´ll come back with depends on your state of mind, how much you want to spend and the species you want to target. They´re all out there, but are you willing to take the chance of coming in with an empty fish box vs. Coming in with many smaller species that will give you an action filled day? Welcome to Roll the Dice Fishing in PV!

At our world famous deep water fishing grounds we have fish, no surprise here. As I discuss the present conditions understand you can spend the whole day trolling, chunking, and baking in the sun and still only come in with one fish! It could be a Striped Marlin, Blue Marlin, Sailfish, even a Yellowfin tuna, but don´t expect it to be easy or automatic. Skill levels, experience and of course the correct equipment will give you a ¨fighting¨ chance. As I mentioned it´s pretty much a mixed bag out there right now, one day the fishing great, the next day it´s a fish ghost town. If you´re around Corbeteña there are Wahoo 60 to 80 + lbs but you´ll be around 15 miles off the rock to the east and north, it´s a wide swatch for sure… Yellowfin Tuna have been in the area, but they´re not automatic and in this same area you´ll find Wahoo and Sailfish. Closer to Corbeteña we have ¨iffy¨ action. If there are fish in the area, they´ll take baits. For now there are fields of Jack Crevalls, Skip jack Tuna and more jack Crevalls. Sailfish are here, but sparse. Surprisingly enough we´re seeing Blue Marlin to 300 lbs, not big but big enough. Striped marlin are in the 225 lb range, but more plentiful. With so few boats heading out to this are it could be a lot better than I am reporting. The reason I say this is because it´s bait city out there, everywhere! Plenty of 8 lb YF Tuna footballs running with Spinner Dolphin to catch, but we don´t head out that far to catch bait! Cuberas Snappers, of course, but you´ll be jigging for these tasty white meat species….. With warm currents coming in I´m encouraged… stay tuned.

El Banco, we´ll it´s pretty much the same, but twenty five miles due north on your way to the Tres Maria islands you´ll find more Blue Marlin in the 300 lb range, Yellowfin Tuna at the first island of the Tres Maria Islands, remember this is a fishery so I don´t talk much about this location since fishing inside twelve miles makes you a poacher, plain and simple…. Unless you´re heading north there is not much reason to hit this area since you can get the same fish at Corbeteña. I suspect by this time next week if the warm currents continue we could have Black Marlin, more Sailfish and hopefully Yellowfin Tuna.

Around the Marietta Islands, El Morro and the Point off Punta Mita areas have been good, not great. Bonito to 35 lbs, the same stuff you see in local tuna cans. Jack Crevalls are running 30 to 40 lbs in the area. Needle fish are still here, but soon to be heading for cooler water. Snapper last week were thick, now they´re less abundant but still in the 10 to 20 lb range for the lucky. . . . Plenty of bait in the area in the form of Sardines, Flying fish, bullet Bonita and YF Tuna, Google Eyes but Bonito are a favorite of the local species, especially Rooster fish.  Speaking of Rooster fish, Around the Point of Punta Mita the Rooster fish have been taking bait in the shore line, just under the breaking waves. Now this is dangerous on a boat so be careful. For the surf fishing guys this is perfect for you. Just use Poppers, Diamond Jigs and Rapallas and you´ll go back to the hotel happy. There are a few Roosters around the Marietta Islands and El Morro Island, but it doesn´t matter where you are, Rooster fish are sparse, but we have Sardines so things could change again.

Inside the bay is really the place to be if you´re looking for action. With Jack Crevalls being the dominant species it´s easy to find arm burning action. These jacks are large and all over the bay. Running 35.lbs as a minimum size your children may have a hard time boating these fierce fighters, but that´s why we´re here, we´ll make sure they boat the fish! Then we´ll take pictures! Bonito are also in the bay, smaller at 25 lbs especially around the south end of the bay around Yelapa. Some Needle fish to 35 lbs, Sierra Mackerals have pretty much moved out again. Sailfish are still chasing bait into the bay. With Visible Bait Balls all around the bay the birds have easy pickings…. All and all inside the bay, a four or six hour trip at this moment is your best bang for your fishing buck…..

We´re seeing the bite between 8 am and 11a.m…. Afternoon bite is after 2 p.m.  The water around everywhere is clean, but the water outside the bay is a high visibility blue making baits very visible! Lures: Purple, start there and move to Petrelaros of brown, green and purple colors. 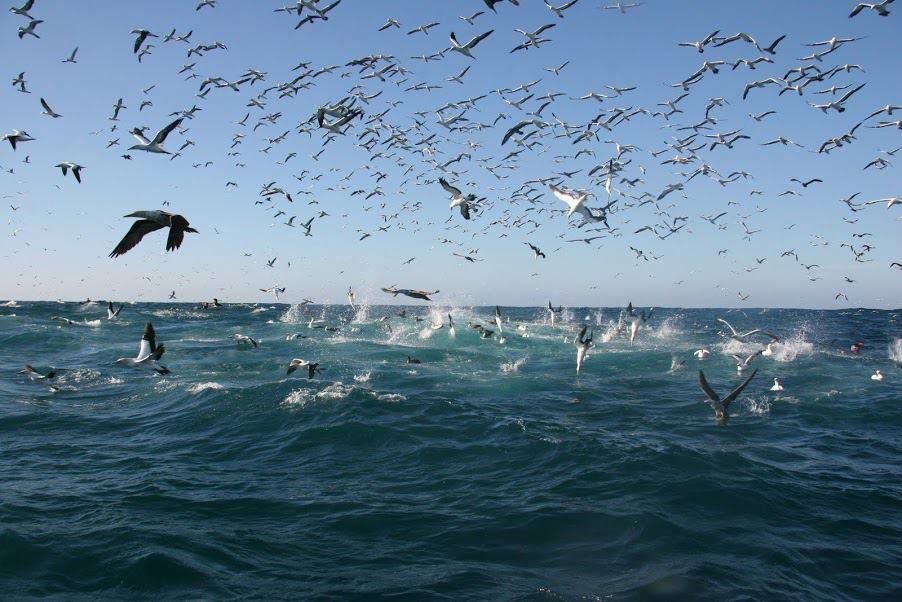 All in a Nut Shell: With the drop in tourism we´re having a hard time determining areas to drop lines. Each fishing ground or area has its ups and downs but with warm currents and Wahoo returning we have cause to be optimistic. Blue Marlin are still here in greatly diminished numbers, but here! Striped Marlin are thinning as you´d expect with warming water temps (they like the water a little cooler). Rooster fish are iffy, but we´re poised for some big improvements. We may or may not see water temperatures continue to increase. But we are seeing bait like you couldn´t imagine as you read this from a lounge chair. There are large bait balls of Sardines all over the bay and around the point of Punta Mita. Baby or Bullet Bonito are thick as can be, mixed in with baby Bullet Tunas. This is the reason we see the weird conditions where we have Sailfish taking baits inside the bay around Los Arcos and La Cruz Marina. Flying fish are at four inches in length, Goggle eyes are a standard. If warmer currents and massive amounts of bait don´t draw in more of these warm water species by next week I´d be surprised. You see when water temps change, the species that like those temperatures move with the water temp or currents. Now when things start to warm up again it takes some time for the ¨new¨ current species to show up. So when the water temps go from cool to warm, the cool water species with drift with the cool currents. As these cool water fish move out, it takes time for the warm water species to drift in with the warmer currents. We may have a great early summer season. Who knows, but with the threat of La Nina, it makes sense to get your fishing in while you can.

Looking to share a boat? Yes we´re still ¨Hooking¨ you up with others on shared boats. This Special is half a super panga, you can have two people max fishing or sightseeing for $275 usd, eight hours. This is the best fishing deal in town. If downtown visit our Store on Basidillo Badillo and Insurgentes. Call Chris (El Centro Mgr) at (044) 322 112 9558 for fishing, tours or T-shrts amigo