After two weeks of less than exciting fishing here in Puerto Vallarta we see signs of life once again at Corbeteña and El Banco. It´s been an up and down week with the passing of another tropical storm that just a day later hit Cabo. We´ve seen dirty water come in at the Marietta Islands point out as a result of changing currents. And if that´s not enough for you, then consider how the warm water is way up north and we´re seeing our Yellowfin Tuna and Dorado once again vacationing in San Diego!

At Corbeteña we´re still seeing the same situation of Shark and Bottle Nose Dolphin stealing any bait they come across so trolling live bait around the rock is a waste. For that reason eleven miles north of Corbeteña seems to be more alive with Marlin and Sailfish than closer to the Rock. I don´t want to make it sound like the fishing is automatic, it´s anything but! But for the big game fisherman he or she knows that fishing at this level is never automatic and every angler or Big Game Fisherman should expect a day worth of trolling with but a few strikes, so make the best of what hits and be at the ready. Blue Marlin are from 350 to 700 lbs, Black Marlin are in the same size range. Sailfish are slim, but closer in around El Morro they are more abundant and numbers are picking up. Yellowfin Tuna are nowhere in the area to be found. Helpful hint, use dead bait and lures when moving around at Corbeteña because the fishing is spread out. You can move a little faster with lures and dead baits, but when you´re in the area between Corbeteña and El Banco I would suggest running live bait and one lure… As for Dorado and Tuna, for now Corbeteña is not the place to be looking for these popular species….

El Banco this week has shown new life with Sailfish, Tuna, yes I said Yellowfin Tuna of football sizes of 20 lbs to 35 lbs but there was a day or so that we were seeing 100 lb Yellowfin Tuna, but it was short lived. This is good news, first come the smaller ones, the big ones follow… Blue and Black Marlin again anywhere from 250 to 800 lbs, but the numbers around the high spots and north are more plentiful that Corbeteña. It´s been a while since I´ve suggested El Banco over Corbeteña but for now it´s better and your chances are twice that of Corbeteña, for now anyway. No Dorado, but for now we´ll be happy with Marlin. How do you complain about having Marlin?? 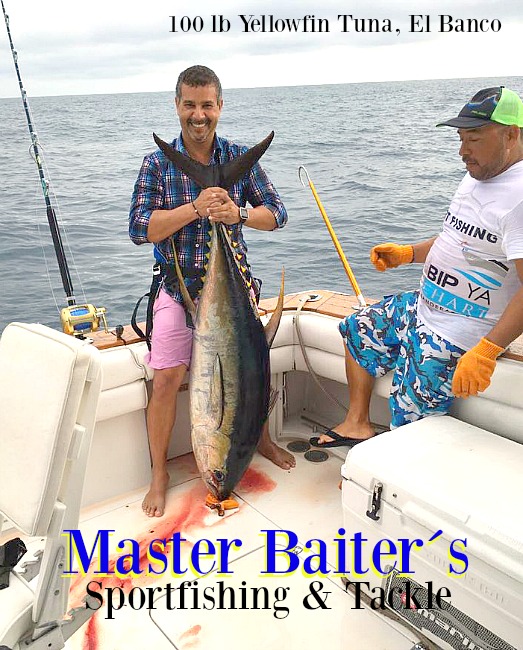 The area north of Punta Mita has a lot of debris from the recent Storm Rains and we´re seeing baby Dorado in the 10 lb range, but again, first come the small fish, big fish follow, so this is good news, lets hope we can build on it! Rooster fish have shown up again, but not in large numbers and not close. You´ll need to head north of Punta Mita to ¨Al Malinal¨, but for the Rooster fish guy, they´re there amigo! Sailfish are as mentioned at El Morro, last week nothing. This is a good place to drop baits. Especially if heading to north of Corbeteña and then work your way to El Banco! There is a lot of Storm Debris which in turn is a hiding place for Dorado so this is a good thing. All and all Punta Mita at this moment in time is not your best option.

Inside the bay it´s the same ¨O¨, same ¨O¨…  Baby Dorado are around any trash line or debris, which means with no rain, no trash line. Jack Crevalls are still everywhere from Corbeteña to El Banco and back again. Not really a sought after game fish, they´re strong fighters and deserve some respect. Needle fish are still in the bay, around El Morro and The Marietta Islands. It is a weird looking fish, good strength and fights well, good tasting also. Skip jack Tuna, Bonito to 35 lbs, Possible Rooster fish, Cubera Snappers for the jiggers and we should be seeing Snook by the middle to end of the month pick up in numbers! Football Tuna are around Yelapa, if they hang out for a while. Inside the bay is fun, but you´re not going to find Moby Dick in the bay. Some mistaken Sailfish have been boated around Los Arcos and La Cruz Marina but don´t think you will hook into one of these….. It´s pure freaky luck to boat one in the bay.

The Bite is after 9 a.m and the early bite may be the only bite of the day! Water Temperatures are still at 88 degrees but could change with the currents. Lures: the best lures to use have pink and blue…. start there and something should happen. Water is now a clean green, not cold, not perfect, but fish will take baits in these conditions.

The good news is the dirty water that was churned up by the recent storms have settled. We are seeing some positive signs for the next week with Sailfish, Marlin and hopefully Yellowfin Tuna numbers increasing. For now fishing is sporadic, nothing concentrated in one area. For now it´s basic fishing, Trolling, looking for diving birds, Bait balls, normal stuff. Patience is a virtue and necessity for now. Strikes happen, but there is some time in between strikes. For the guy who expects automatic strikes, he´s going to be disappointed. It´s just spread out fishing and circling Corbeteña Island or the High spots at El Banco is not going to cut it. Bait is plentiful, no issues there. For the fisherman who knows it´s a process mixed with a heavy measure of luck, they seem to be the luckiest.  Again, be patient, be early and be positive, World class fishing is happening now in Puerto Vallarta……