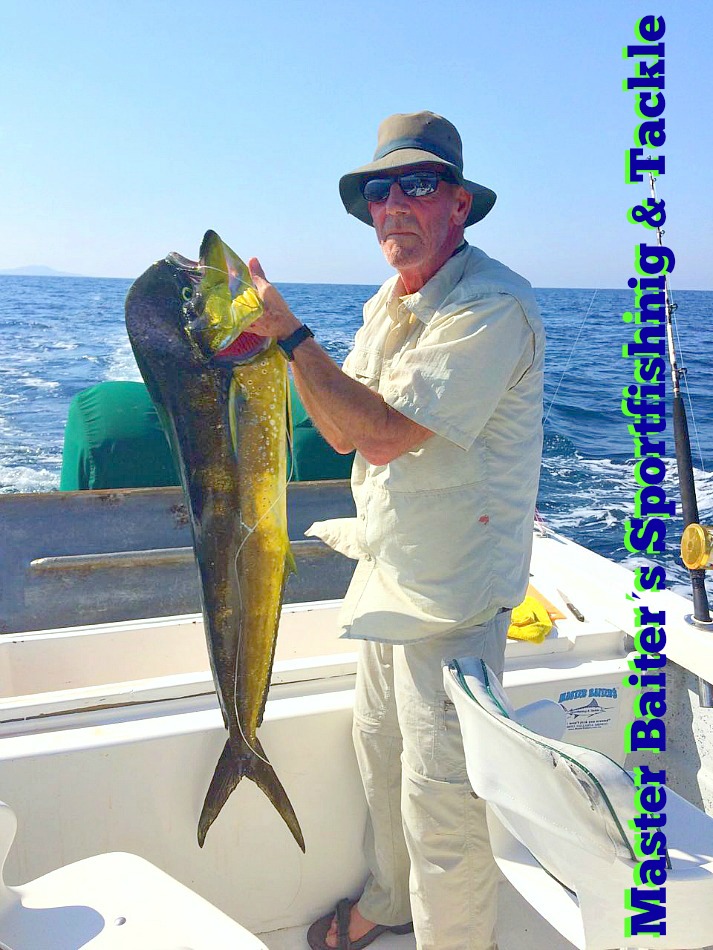 For the last two weeks I have not posted a fishing report because things changed so drastically i didn´t want to put the ¨Doom and Gloom¨ down on everyone. We had water temps drop in ten days form 87 degrees to 74 degrees. It was when the cold snap happend a few weeks ago:

The water got dirty, the swirling currents mixed up the sediment on the ocean floor bottom and frankly to me it looked like the fishing season was over just when things were finally, finally getting back to what PV was famous for fishing wise. Every warm water species bugged out, or found warm spots in the ice water we had move in. That was two weeks ago, things have changed, thank the fish gods for that. Watert temps gradually moved back up to 80 degrees presently. Dorado, Sailfish and even Wahoo came back into the area and now things look great for the next few weeks anyway.

I never really paid much attention to currents, water temperatures or the like until I started writtting this fishing report when I took over the company in 2004. Now after years of paying attention I´ve learned that El Nino is not something that just ¨ends¨ like turning a light switch off. No, rather it´s a slow process, a washing machine effect on currents and water temps. Now finally it looks like we´re in a normal pattern after perdictions of La Nina coming in immeadeately after wards as can happen.

Having said all that, we move into the present conditions which are not perfect, but we can work with it. Bait is moving back into the area in the form of two inch Shrimp, you know the shirmp that cost too much and the fish are eating it for free! Red crabs came in also, so we know the Yellowfin Tuna will soon follow. But the Shrimp and Tuna Crabs are examples of a normal current returning. We see this happen every spring and winter and is normal. A normal we like to see. So for the record, we´re getting back to a normal seasonal flow and that is a good thing. Now on to this weeks fishing report….

A little better than two weeks ago we had perfect conditions when it comes to fishing. High Visibility Blue Water, perfect water temperatures, plenty of fish and plenty of bait. A combination made in fishing heaven, but that changed quickly with a super frigid current that pushed down the west coast all the way to Mexico. If you remember the cold snap in the news, it all started then. Now I am glad say that the water temperatures that at one time hit 74 degrees are back to 80 degrees and climbing slowly back to where we would like to see them. Yes folks, the scare is over and we now have Wahoo, Wahoo!

The new challenge this week, and there is always a new challenge, is a bait issue. Yes folks we´re seeing the Tuna or Red Crabs come back in with massive amounts of small, one to two inch shrimp. Everything is getting its fill of these succulent crustaceans and frankly they´re not looking at other live bait offerings! But we can work with this issue, cold water is another thing. 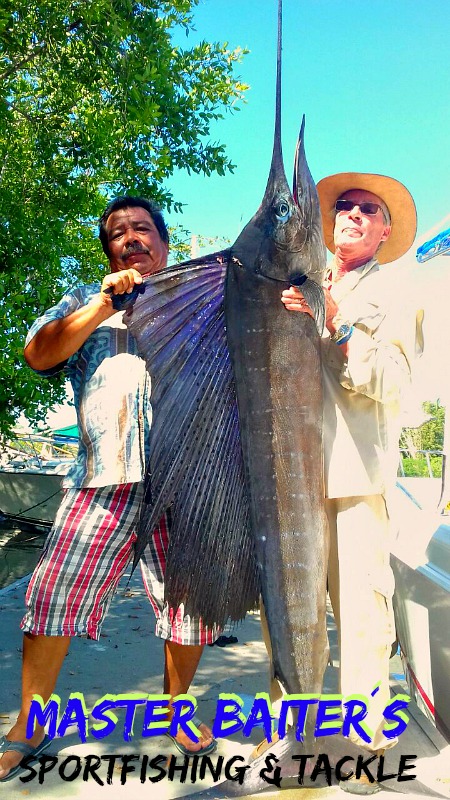 Corbeteña: The water is high visibility blue now and the water temperatures are back up to 80 degrees. We have Blue and Black Marlin from 400 to 600+ lbs, Sailfish, Dorado to 40 lbs, Yellowfin tuna to 50 lbs, Wahoo at 60 to 80 lbs and the ¨locals¨ are jumping everywhere. Down side, those shrimp are everywhere and even the Marlin are hitting them. One trick that could work, bullet Skippies or Bonito. That will turn their heads, good luck finding them. Try around the Marietta Islands on the way out and you hit a home run amigo. Goggle Eyes are finally working if you can´t get a bullet bait. El Banco or The Bank: Pretty much the same story amigo. But remember things can change drastically from now until ¨then¨ so ckeck conditions regularly.

The Marietta Islands / Punta Mita / El Morro, the whole area has come to life and we´re seeing Rooster fish (30 to 50 lbs) for the first time since I don´t know when off the back side of El Morro and around the reef areas of the Marietta Islands, but the shore areas are alive also so remember that with Roosters. Dorado of course at 25 to 30 lbs, Sailfish, and even the possibility of 60 lb Wahoo off the back side of El Morro towards Corbeteña. Don´t be afraid to use a little fuel in this area, there are fish to be had finally in an eight hour day fishing trip! 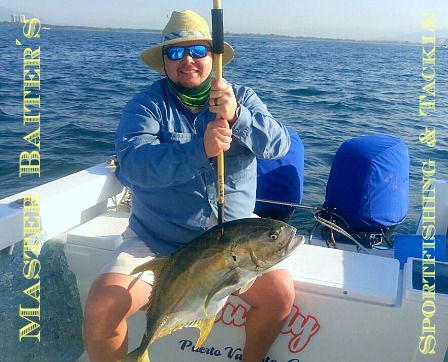 Inside the bay we´re still seeing Jack Crevalls which are filling up on Shrimp as well, Bonito to 35 lbs, Freak Sails around Los Arcos and La Cruz still. Snook in front of the rivers mouths and along the shore in rocky areas. Sierra Mackerals, possible Dorado around Yelapa along with some football Yellowfin Tuna to 40 lbs. Four hour trips are catching a nice selection of fish and the whales are back in the bay. You´ll have the extra pleasure of seeing Moby Dick at rest in the bay amigos!

The Bite has been a moving target and mid day seems to be the best, but get out before 9 to be safe. Water Temps are increasing from the 74 they were last week to the present 80 degree mark so we expect fishing to continue for at least a few more weeks… months no! Baits: With all the shrimp and Red Crabs it´s hard to get a bait in front of these fish that will turn their heads. But as mentioned earlier Goggle eyes seem to be doing the trick, so give it a try. As far as lures go, same stuff, petrolerso, inguanas of green and yellow with black flecks or stripes. 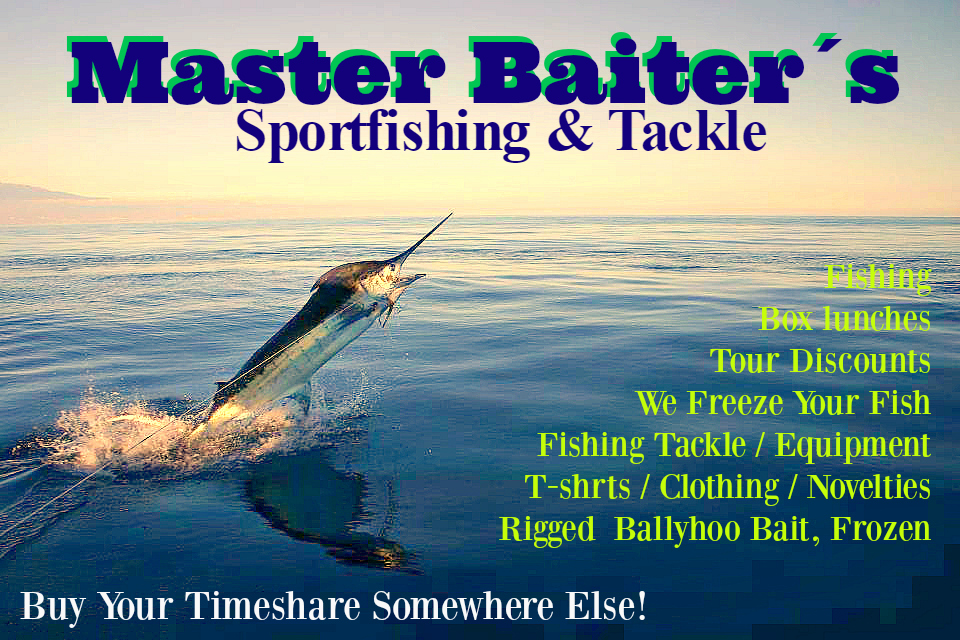 Remember Master Baiter´s is freezing and storing your catch sin charge for customers. Non customers are covered also but there is a fee for this service if you don´t fish with us. Raffa is my new tour expert and we won´t be undersold so fishing, freezing and fun, we´ve got you covered amigos!