Before we get started I want to extend my appreciation for all your support over the years here in Puerto Vallarta. This is the only comprehensive fishing article / report about Puerto Vallarta Fishing by a real fishing company, for real fisherman and those looking for entertainment. Again, thank you for your years of unending support!

Every year we wait for October as the fishing always explodes in October! This year we’re blessed with some larger Yellowfin Tuna, Dorado are moving in as well. Sailfish and of course it’s Marlin City with hard to beat conditions of super blue water, plenty of bait and perfect water temperatures. If you’re a fisherman and you don’t head to Corbetena, you may have missed out on the best fishing of YOUR life!

The year following an El Nino can be a mixed bag of good days, bad days and then there are the Hurricane days that push fish out. We’ve seen mixed water currents, dirty water, clean water with no bait. This year we’ve seen it all that’s for sure. But we haven’t seen fishing this good and predictable or many years. It looks like we’re returning to “normal”, whatever that is. For now if you’re in Puerto Vallarta by plan or by accident, you’re a lucky “puppy”. The best fishing of the year is from October 1st to the end of December. You looking for a specific species, we’ve got it.

Lets start with Corbetena, for the first time in a long time the fishing is incredible. I mean like the famous Corbetena of old. Why would I say this, well to start there are Yellowfin Tuna in the 160 lb range and we haven’t seen this for a long time. Yes some here and there, but not consistently like now! Marlin, Blue or Black, take your pick they’re in the 250 to 500 lb plus range. Sailfish, you bet and they ‘re all over the area. Dorado you say, I am glad to report there are Dorado in the 20 to 40 lb range and they’re waiting for you to arrive amigos. Super Duper Blue Water, perfect water temperatures and the whole crew are taking baits faster than my ex-wife with a new credit card at a Nordstrom’s Shoe sale!! If you’re looking for a Trophy fish now would be a great time to get on the water.

In fact the whole area between Corbetena and El Morro is which I refer to as the “golden triangle” is alive with possibilities. It’s a wide range so drop baits in this area and troll towards Corbetena, something is going to happen so don’t go too far from the pole. This area is known for Sailfish when other areas are void of fish. Just a touch out farther you’ll find Marlin so if a ten hour trip to Corbetena is too far, an eight hour trip can get you close. All and all you’d be better off putting down the cash to get the big fish on tap. The Marietta Islands just down the way a few miles has been less than impressive for some reason but they still have a nice selection of reef fish, Bonito to 30 lbs, Skip jack Tuna to 7 lbs, maybe and I do mean maybe some Dorado and there have been Rooster fish in the area so with some luck you’ll have a great day. Again, I’d put the extra cash down and hit the rock. The area around Punta Mita has seen Sailfish and Dorado around any stump, trash or clump of anything. Dorado are in the 25 lb range and could be larger. Some Rooster fish in the 40 lb range have been boated in this area as well. Sailfish are also in the area, north of the point, not in the Marietta Island area. You could hit some Marlin if you head out five to eight miles or so. Give it a shot.

Inside the bay has been tough the last few weeks. We’ve seen pretty much the largest thrust of Hurricanes with the torrential rains settle down a bit. The rains still remain but they’re not strong inland so we’re seeing some clean water in the bay which makes things easier for the person in the market for a short day trip. The clean water allows the fish to see your bait, sorta kinda important!  The Trash Line this year has been less than impressive, yet there are still smaller fish feeding off the berries, twigs, seeds, leaves and whatever else they think they can digest. Sailfish are still sprinkled throughout the bay and they’ll take a bait, but it’s not automatic and can be frustrating. If targeting Sailfish you’d be better off hitting the El Morro area. Sails in the bay, somebody is going to catch them and you could get lucky. Yellowfin “Football” Tuna in the bay and in the same area are running 25 to 45 lbs are perfect for the table and fun to catch. Tuna in the bay is reason enough for a six hour fishing trip, but in this case four hours would do you nicely. Just remember to hit the bite at the right time or you’ll come back in with something, but probably not Tuna. Bonito of course are all around at 30 lbs, Skippies aka Skip jack Tuna are everywhere and “thick” which is drawing in Sailfish, wink wink. Jack Crevalls around the river mouths as they like the fresh water and there is a host of possibilities there you’d never know about. So head out and have a memorable day with “sore” arms.

The bite right now is happening just around 9 a.m. which is perfect so you can still leave Marina Vallarta at 7:00 a.m. and be at your chosen fishing grounds right on time. The late bite is around 4:30 p.m. The water temperatures this week are hovering at 86 degrees, down a bit but still in the “perfect” range for all our favorite species. The water can’t get any bluer and there’s plenty of bait. Speaking or bait, Dead Bait, live bait and lures are working well. Dead baits seem to be the preference for Sailfish and some Marlin. Tuna on the other hand are hitting Skippies and Bonito or Chorras. Lures that are working the best mimic flying fish so Blue and white lures are working well. As are gucamayos of green, orange and black. Don’t forget Tuna will hit a cedar plug always. So don’t think these are old and outdated, they work, they’re cheap and did I say they “work”? So have a full bag of tricks or lures in your world and don’t be late. 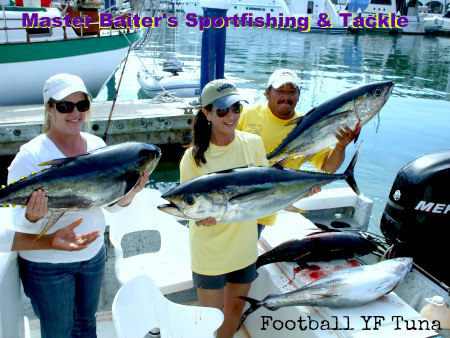 Shared Boats: For those of you looking to share a boat we can fix you up. You’ll share half a super panga for 8 hrs, this works for up to two people for half the boat. Ice, bait, captain, crew that speaks english, top notch professional equipment and tackle, everything except what you eat and drink… All that and a bag of potato chips for $275 usd! Two people max, half the super panga… that’s the deal of the century amigos… We’ll run this all year so if you want to save some money, have lots of fun and hit some Sails and Dorado, then this is the deal for you!

FYI, Mexico a few years back passed a new law meant to protect the consumer from scam artist and other unscrupulous “promoters and timeshare” types that continually cause issues which means you get screwed out of money. Sectur working with Profeco the consumer protection agency has made it mandatory to have a specialized license to sell tours and fishing charters! This license needs to be presented so the public can see if they have it, but more importantly if they don’t have this new Sectur license they are selling you tours and fishing charters illegally. The authorities are not enforcing this law as yet, but be warned. If you do business with persons or companies without this license then anything that happens is on you. Master Baiter’s to the best of my knowledge, I checked, is one of the very few fishing charter companies that have this license. These new laws were written to protect you for a good reason. So look for this license, if it’s not show ask for it. If they don’t know what you’re talking about, they’re pirates flying under the radar. Another interesting development is the Navy now has taken over the operation of the boats coming and going along with all the necessary licensing. This would be legal matriculas, which in Mexico is a mandatory permit to operate a fishing charter business. One way the many illegal boats have been able to stay in business is by paying off the port authority, they say they’re legit but never are. The navy now is checking these necessary documents and will be fining these illegal operatiors that put money in the hand of the “port authority” to operate a fishing boat. This is my biggest problem as they don’t pay taxes, insurance, they get away with this by bribing the authorities. This is the biggest reason the Port authority has been taken out of the loop. Yes you still get your documents thru this office, but they don’t run the marina any longer! Legit businesses have been run out of business because they can’t compete, but this has changed for the better. Safe boats are what we’re all paying for. Things like radios, life preservers and first aid kits save lives. Do you really want a cheap boat that risk your safety with a lack of these basic safety elements? Then you’ll be glad the Navy has your “tourist” back at heart!

Remember to visit our new location on the Malicon or boardwalk on Morelos right at El Faro or the light house. Also look at our web page, we have some new boats, removed older boats and have some different options. We are showing some less expensive boats for the budget hunters. Then we have the nice boats that are priced accordingly. Then we have a few new yachts for fishing or cruising. We’ll be adding Sailboats shortly for the Sailors out there. We also have some different products in the Boardwalk store I don’t have in the marina store as yet. So go in say hello to Ben or Carmen and check out my newest location!