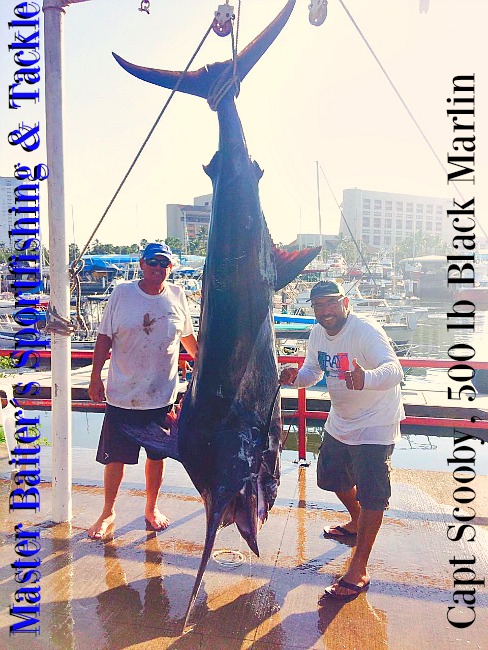 One thing about world class fishing is “you never know what you’re going to get” to quote Forest Gump. This week we’ve seen El Banco just stop performing, don’t waste your time. Yet we see Corbetena continue to be its reliable self. Water is super blue and there is plenty of bait in the area so the fishing is great, not perfect, but what is?

First thing that comes to my mind it the fact water temperatures have increased to 86 from 84 in one week, this is not bad, but we don’t want it any warmer for now. Marlin are still roaming around the Corbetena area but they’re not concentrated in any one place. Rather Black Marlin are roaming anywhere from the “rock” to areas north about eight miles. The Marlin are both blue and black running anywhere from 300 to over 500 lbs. One secret here is dead bait, yes dead bait which is a little surprising with all the live bait in the area. Another secret is some days there are Skip Jack Tuna (Skippies) in the area, some days they’re not. Skippies are working well as far as live bait goes, so if you can make bait, don’t delay. If you can’t use Iguana Lures of yellow and green with black accents. They work well and with all the five pound Dorado in this area it’s a perfect bait. Dorado are great bait and Marlin and Tuna love them. The reason we don’t use Dorado as a trolled bait is they die and just spin. That’s not a good thing. They can’t handle the volume of water I guess. Yellowfin Tuna are still in the area and jumping about one mile north of Corbetena. Now remember fish move, so start here and let me know how you do! Yellowfin are running in the 100 lb mark but they are only taking baits when they come up. Capt Cesar of Magnifico tells me that if you’re lucky enough to be in the area they come up in, anything is possible. Feeling lucky? If you’re in the area, Tuna and Marlin are not bad options! Sailfish are also hanging out in the area but they’re kinda sparse. Plenty of bait, but that doesn’t go for Skippies which may or may not be around the rock. If you can make bait before you get to Corbetena it’s cheap insurance. I could spend some time on El Banco or The Bank in English, but it’s not happening, enough said.

The area around the Marietta Islands have been less than exciting lately unless you’re looking for Sailfish and they’re about six miles or so before you come to Corbetena or about five miles out from the islands. Lots and lots of small 5 lb Dorado, too small to keep, but Mucho! It was about this time last year when we finally saw the Dorado numbers pick up so cross your fingers hoping for their big brothers to show up. Don’t ever keep females or Dorado under ten pounds and help keep the numbers from dropping any worse than they are. FYI we’ve seen long liners raise their ugly heads again and they many times have guns to protect their illegal long lines. It would be nice if there was some enforcement, but it’s Mexico and everything has a price, no matter what’s good for the general population and the fishing industry as a whole. Not too much happening around the Marietta Islands. Needle fish to 25 lbs., Jack Crevalls to 40 lbs. and of course there are always reef species. All and all not a great time to visit this area. Now if you are heading to the point of Punta Mita there have been Marlin about twelve miles off the point (take a heading of 300 to 320) and be there at mid-day, can’t hurt. Dorado are in the area as well, but they’re small as well. This will change soon with the numbers of smaller Dorado increasing the lager family members should be showing up soon, stay tuned. Update Aug 4th: Sailfish have all but taken over Punta Mita and the surrounding area. Also there are some smaller Black Marlin just a few miles off the point. Lots of rain the last night or two now, so there are lots of opportunities for Dorado around this floating oasis for these fish… Now go put this info to good use…..

Inside the bay is the same old story. Plenty of smaller species to choose from. Jack Crevalls of course to 35 lbs. or larger. Sierra Mackerel’s surprisingly enough are still in the area at around 15 to 20 lb maximum. Normally a cold water fish like Jack Crevalls they will defy explanation. Sailfish are still in front of Los Arcos as are an incredible amount of baby Dorado feeding on any trash line there may be. It’s been a funny year we haven’t see too much rain so we’re not getting the trash line. Now yes we are getting rain, just not enough to really wash the local mountains of leave, twigs, berries, seeds, you name it they’ll eat it. There has been Sailfish around Nuevo Vallarta as well believe it or not, but don’t hold your breath waiting on a strike. The Football Yellowfin Tuna we had last couple of weeks around Yelapa have bugged out. As always the action in the bay is still great by any stretch of the imagination and well worth the expense. Which reminds me, we can make it a fishing trip, snorkeling trip and who knows, a Yelapa trip to cook your catch on the beach with a cold beer. Ask me more about this option, it’s like two trips in one.

As mentioned earlier the water temperatures are at 86 degrees which is a neutral as it doesn’t really affect anything but it will if starts to get warmer. The bite has been a moving target and frankly hard to predict these days. If you’re at the fishing grounds you choose before 9 it should serve you well. But Tuna are coming up at any time for a short, short while. You will have to have the luck of the Irish but stranger things have happened. One guy came in the other day and caught it perfect for fifteen minutes, got a 100 pounder YF Tuna. As far as baits go, dead bait seems to be the bait of choice lately. With plenty of Blue and Green runners, Goggle Eyes and flying fish to me it’s surprising that dead bait and lures are working best. Lures, of course we’re still talking as mentioned earlier of Iguanas, but Cedar plugs are worth a shot with the YF Tuna around Corbetena.

Special Announcement: For all my readers and friends Master Baiter’s has opened another location, this time on the Malicon next to Sr. Frogs at the light house or El Faro. We have the same great shirts, same great fishing trips and now we have another new employee Carmen. I’ll be posting pictures and as soon as I can figure this all out we’ll have a Grand Opening… Master Baiter’s on the Malicon… kinda has a ring to it don’t you think? We’ll be carrying more product and we hope you come by and say hello. We will keep the marina location as I can’t imagine not having a presence in the Marina. We vacated the location we had on Basillo Badillo and Insurgentes. They kept the Mural, they did change the company name, but the guy who used to work for me is in that location now working for my competition so don’t be fooled. Even if the guy inside is wearing a Master Baiter’s shirt, he is not with me or Master Baiter’s. Come by! And remember at Master Baiter’s we won’t sell you a timeshare! 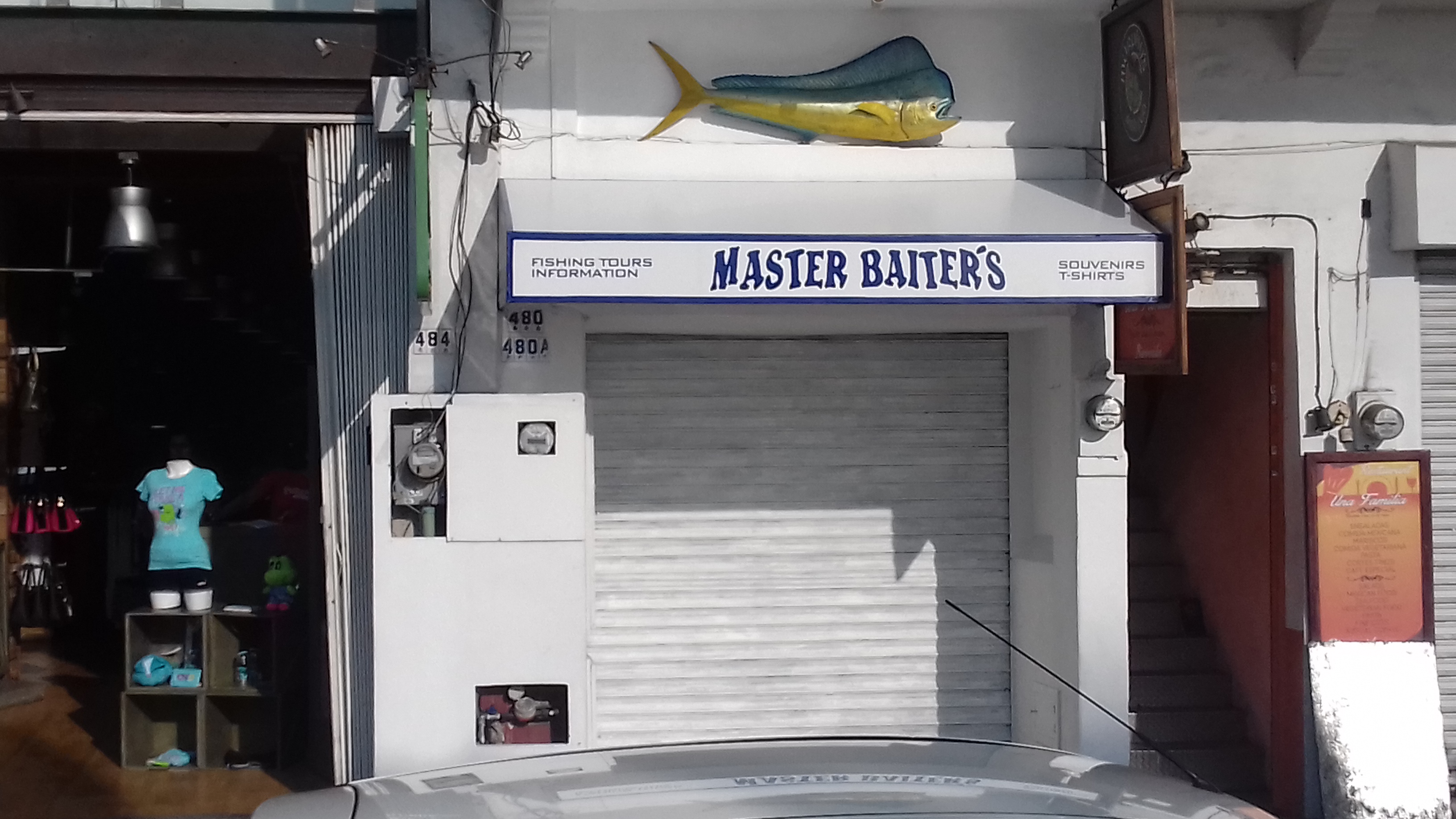 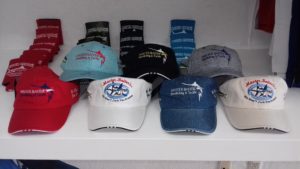 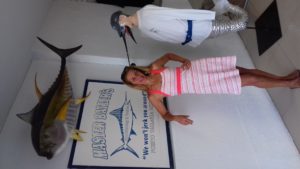