The simple title pretty much says it all. Marlin are more abundant and larger. Dorado are increasing in size and Sailfish are all over the place. Yellowfin Tuna are still hanging around, but their size is around 40 to 60 lbs, no larger Tuna like last week, but this can change quickly. Conditions which were already good are now great with Blue water, comfortable water temperatures and plenty of bait make for a winning combination as High Season for Fishing is well underway. It’s time to join the party amigos, consider this your invitation.

To put things simply, the fishing is better this week than it’s been in a year! With Blue water, super abundant bait, perfect water temperatures and all the main players around our world famous fishing grounds, you can’t go wrong. Short day, long day, just get on the water and join the party. Corbetena is the place to be this week once again. If you’re looking for a “Bucket” list fish, then now would be a great time to realize that dream with “hungry” Black and Blue Marlin roaming the area between El Morro and Corbetena. These Marlin are running anywhere from 300 lbs to over 500 lbs. Anything is possible right now, maybe even some “Ganders” at 1,000 lbs! Sailfish are all over this area and they’re fairly large. Dorado in larger sizes have finally showed up for some “recreation” as Capt Kawi hit a larger Dorado this week. Yellowfin Tuna are a little disappointing this week on the 40 to 60 lb range, but this will most likely change as the water temperatures are finally to their liking. A trip to this area will make you glad you spent those extra fuel bucks amigos. It’s time to break the piggy bank and come back with a smile and sore arms! UpDate: Oct 17th: Sharks are circling the Rock at Corbetena and if you’re running live bait, well they’re worse than Dophin because they’ll eat your lure, bait, hook, everything. So you could boat some 80 lb or larger Lemon sharks. If you’re a shark guy, this is great. But if you’re looking for Marlin, Tuna or Dorado, then this is frustrating! But you’re in luck, they’re all hitting lures now. So run Tuna Lures of Blue / gold bottom…. Iguanas or Gold and yellow with blue if you have it… Petroleros work also but not as well of purple, brown and green…maybe some orange will help. Cedar plugs for Tuna as well. Everyone is getting at least three strikes a day, Dorado, Marlin or Sailfish mostly. Yellowfin Tuna are in the 60 lb range but with massive amounts of Skippies around Corbetena and in the bay, with other vaired baits like Krill squids or Teeny tiny red crabs make it a smorgasbord all you can eat fish fast food.

The area from Punta Mita to El Morro and the Marietta Islands have been less than exciting for so long it’s almost not worth mentioning. Yes there are Sailfish and Dorado around any clump of “crap” or log floating and that’s good news. Sailfish are sprinkled throughout the area but can run “hot and cold” so be patient with them. Skip jack Tuna (10 lbs max.) are everywhere and are drawing in larger Dorado on occasion, nothing is ever automatic. But with larger Dorado finally moving in again, larger ones can’t be far behind, anything is possible. For now if you’re doing eight hours to this area, you’d be better off laying down the cash for a ten hour day where the best fishing is and getting better!

Inside the bay has been surprising once again. Sailfish of decent size are still hanging around Los Arcos as are “some” decent sized Dorado close to 20 lbs, but mostly around 15 lbs. We’ve even had a larger Black Marlin chasing Skippies aka Skip jack Tuna in front of the Sheraton about a mile out. Very strange for this to happen, but it’s an example of plentiful bait in the bay. Now the water in many locations is still a touch dirty, but the rains are slowing down and the water from the rivers is much cleaner as the rainy season comes to an end. Bonito to 30 lbs are always standard fair. Yellowfin Tuna in the 30 to 40 lb range are in and out anywhere from Los Arcos to Yelapa and a touch south up the shoreline. There are massive amounts of Skippies in the bay, like there used to be so larger fish are coming “freakishly” into the bay for some fast food. Four hours in the bay, six is better, will make you a happy vacationer, if not a sore vacationer! Great value and with our super inexpensive four hour trips you can’t go wrong. Contact us for further information or come in the shop for details.

For now the best fishing values with the most fish are at Corbetena and in the bay. But if you find any floating logs or debris around the Punta Mita area you could make me a liar! Keep the radio on and listen for the news as other captains will broadcast to others so we all can share in the “good times”. Water temperatures have dropped a bit to 83 degrees at the “Rock” aka Corbetena. 85 degrees in the bay. The Bite is still happening a little later in the morning, but if heading out to Corbetena make sure you’re leaving as the sun rises. Those looking to leave before daybreak will find captains a little hesitant to go fast. If you hit a log or submerged stump it will ruin your day. So getting out too early is not an advantage amigos at this time. Bait in the water ranges from Flying fish, Bullet Bonito and Skippies, Flying fish, Goggle eyes and more. We’ve seen Sardines moving in which means there have been some smaller Rooster fish around Punta Negra but they’re only 10 lbs or so, leave them alone for now. Some strangeness lately with Tuna crabs in the bay, but they’re teeny tiny, about a half inch across. The Skippies are full of them so we may see some larger Tuna crabs soon and that’s a good thing for the Tuna Guys! Even Krill shrimps are coming in so the possibilities for next week are encouraging, stay tuned! Sails are still partial to dead baits and lures of blue and white are working well. Like always have your Dorado lures at the ready. Just try everything, then let me know what works for you, I won’t tell, ha ha….

With more and more clients looking for shared boats we’re promoting our special deal for half a super Panga at $275 usd, good for two people. It’s the best eight hour fishing deal you’ll find in PV so fire us an email and get your name on our list to match up. Save money, Catch fish, have fun, seems pretty simple to me!

We also have a great four hour trip, it’s nothing fancy but it’s a product that is perfect for times like these where we troll to Los Arcos from the marina area and slowly around the area. It’s a half standard four hour fishing trip, but for now it’s all you need to have fun if you’re on a budget and want some nice action. Contact us for more details. 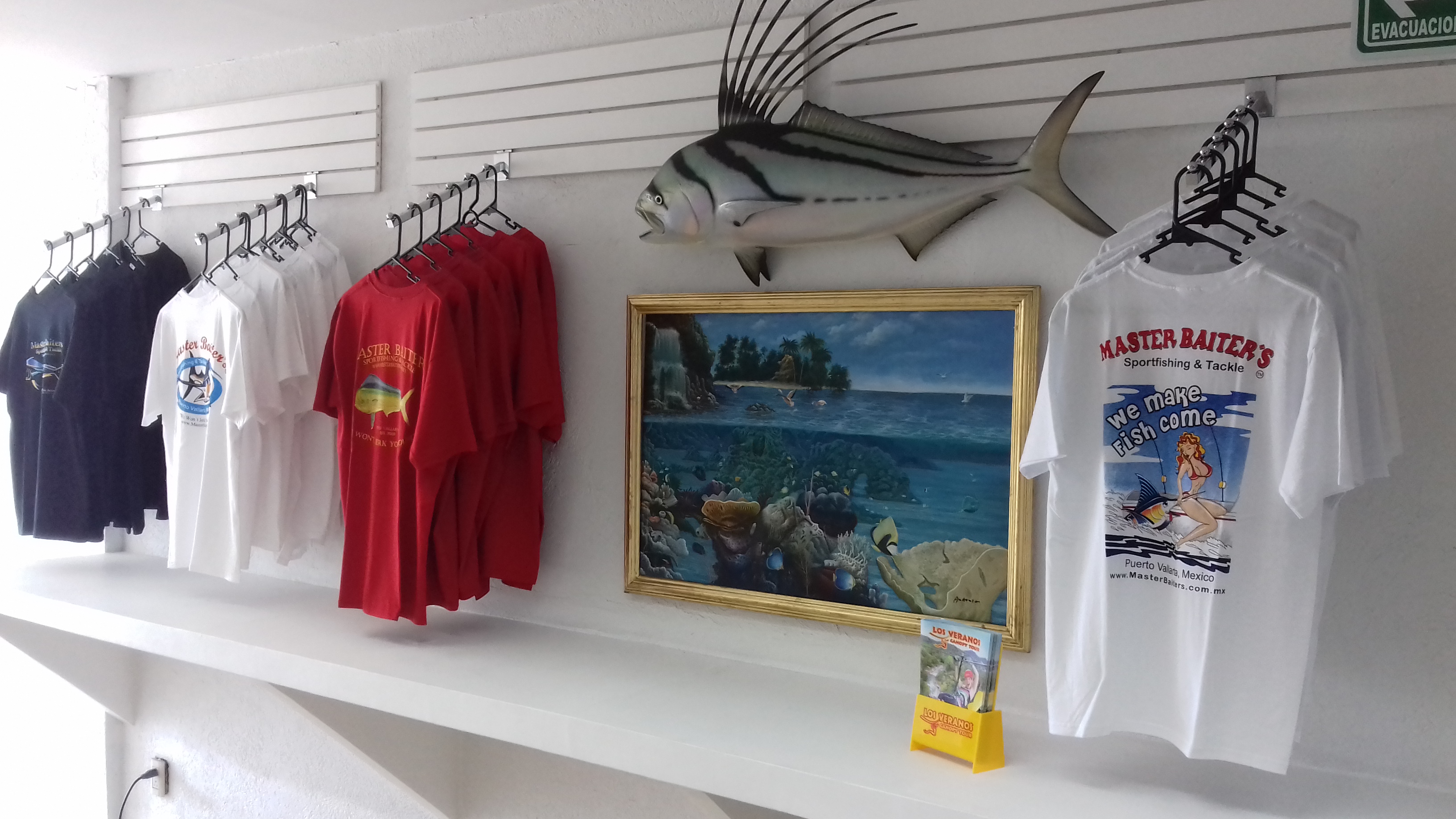 Remember to visit our new location on the Malecon or boardwalk on Morelos right at El Faro or the light house (next to Sr.Frogs). And don’t forget about our Marina Vallarta Store as well!

Fire me an email and get on my mailing list so we can send you these reports directly fresh and useful! Or visit the web page and subscribe, it all works the same!