As we inch our way closer and closer to the winter season the holidays are upon us. Many holiday travelers hope to catch a bucket list fish during this time of the year. Most of the time we can provide this list item, but this year is different. We’re seeing cold currents continue, but they’re coming up from the south, not north. We’re also seeing these cold currents in a swirling pattern that means we have warm water species and cold water species all sharing the same neighborhood. With all the “crowding” there is still plenty of bait in the bay. Now this is normally a positive, but when there is so much bait that they don’t give your bait a look, this can be a bit of a problem. The up side, we have lots of fish to choose from! Those with a little luck will be going home with memories of a lifetime!

Amazingly water temperatures are still in the 80 degree range, dipping just a tad lower at times. What this means we have perfect conditions for warm water species like Sailfish, Marlin, Dorado and others. We also have enough bait in the area to keep the “locals” interested as we move into the last stretch of high season for fishing. Corbetena has been improving with Sailfish, Blue Marlin in the 250 to 350 lb range, Yellowfin

Football Tuna are in the 40 lb range as well. Now they’re looking at all sorts of bait, so they may look at your presentation, then move on. This will drive you crazy. But they’ll take baits as well, so it just depends on what your target species comes across first. Dorado are still in the area, but they’re moving around. Where they were yesterday is not going to be where they are today. Fish move, they’re funny that way. Make sure you give yourself the time and a boat that will use fuel, which means not bargain boats. Many times bargain boats will not tell you there are fish off a bit in the distance as it would cost them money, impacting their bottom line. You on the other hand “thought” you paid to go fishing and you did. So make sure you ask the correct question along with “how much”! Some boats come in with fish, some don’t, it can all come down to fuel usage. With blue water, plenty of bait, you’re about a 70% shot at coming in with a Bucket list fish. El Banco is seeing fish as well, but with Corbetena running hot not many are using the extra fuel just to find no improvement on conditions. If targeting Marlin this is the best place to try as the numbers are greater in this area for the moment. 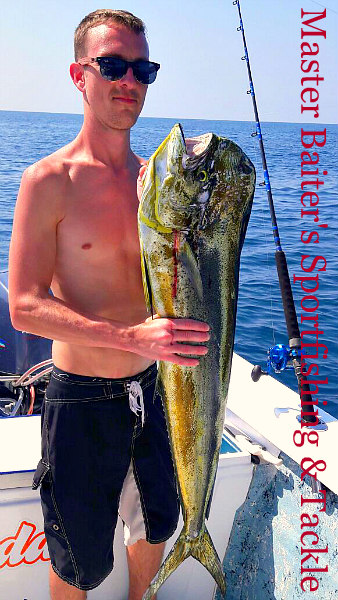 The eight hour trips taking you to El Morro / The Marietta Islands / Punta Mita point has been producing nicely. Dorado in the 30 lb range, Sailfish in the 90 lb range, Wahoo are in the area and taking baits, but catching them is not easy and they’re not a schooling species so they taste great and you’ll be lucky for sure. Striped Marlin to 250 lbs. With Blue Marlin over 300 lbs in the area you can essentially catch the same species at Corbetena, save money and if all fails, come back into the bay and hit the “freaks” hanging around La Cruz marina. With Sardines in the bay you’d have a Rooster fish expectation, but you’ll be disappointed. We had some larger Roosters last week, this week they’re much smaller. Throw in Jack Crevalls at 25 lbs, Bonito to 35 lbs and maybe even some 30 lb Snappers and you’ll have a fun day for sure.

Inside the bay is still and always will be great. Inside the bay we normally see smaller fish. Recently, well for some time now actually, we’ve seen Sailfish around La Cruz, Dorado around Los Arcos to 25 lbs, Needle fish to 30 lbs, Sierra Mackerels running 15 lbs and tasty. Snappers are around the bait balls and in between the Bottle Nose Dolphin feeding on the abundant Krill squids and Shrimps. Maybe even some Yellowfin Footballs around Yelapa. Four hours will do the “trick”, but six hours give you some time to find them.

For three weeks now the bite has remained after 10 a.m. so getting up and hitting it too early may work against your cause, especially if you’re heading out for four hours. You could be back before the bite happens! Water temperatures remain surprisingly high at 78 to 80 degrees we move closer to winter with the swirling currents.

INSIDE INFORMATION YOU CAN USE: Since you’re here on the web page, getting your information fresh and unfiltered I have to say things fishing wise are up and down. The “Fish Soup” title is just that, you don’t know what  you’re going to get. For now we’re seeing Krill Shrimp and Squids that everything in the by just loves to eat. You can get lucky and find some fish that haven’t stuffed themselves. Then again, you could find fish that are so full they won’t take a bait, but they may take a couple of looks, then move on. Now that will drive you crazy! We’ve seen many Dorado and Sailfish from the Marietta Islands to Punta Mita. Some days this is the only place to be. The problem is fish move, so where they are today is not where they’ll be tomorrow, not surprising. The question is “Where are they today”? If my crystal ball would get back “online” i’d be able to tell you. But until then it’s a search to enjoy mission. With many boats in the bay, they have radios and know that people catching fish is good for the overall health of the Sportfishing industry. Now if you’re on a “bargain basement boat” with no radio, not only is this dangerous and illegal, they can’t hear the updates of where the fish are. Another thing to think about is the boat you reserved, did you get a great price just to discover the boat you’re on is trolling baits at ten miles an hour. Twice the real trolling speed, which means you’re not fishing as they create the perception that you are. It helps keep you from getting mad about the boat speed as other boats are passing you left and right. You may at this point get the idea that you’re getting exactly what you paid for. Nobody in your party ask how fast you head to the fishing grounds? Now you know. Your fishing time in the water reality is that at ten miles an hour it will take you two hours to get to the Marietta islands or Punta Mita. That’s two extra hours of fishing you don’t get! On top of that, you have no shot  at catching a fish, none! It is meant to make you think you’re “fishing” yet they know you’re not. Two hours to the Marietta Islands or Punta Mita point, and then they do the same “slow boat, fast troll” back to the Marina. On an eight hour trip, you got screwed out of at least two hours of real fishing. If you compare the time fishing vs the money you paid per hour of “real fishing” then you’ll understand your real cost. This is very common. With fuel prices jumping twenty percent in the last year and there have been more announcements of continued fuel increases of another twenty percent. That’s forty percent fuel increase in an already expensive market. Mexico has so many social programs connected to energy that with people using less fuel, the revenues are down as you’d expect. So they kicked up the cost even more to make up for the shortcomings. With fuel cost a constant factor in an already expensive activity those looking to save money should question what they’re getting for their money. Another inside fact about these boats is the captain more than 80% of them do not own their boats, that’s a fact. When they quote a price, they are cutting it to their quick. If for example the crew hears there are fish striking near by, the captain of the boat would need to kick it in gear and zip over to where the fish are and you’d expect they would. They won’t. The won’t go because if they use too much fuel the boat owner will take it from their pay. Or worse, take their pay and then fire the poor guy. Not all are like this, but a significant amount of them operate in this manner. So, if you’re looking at price exclusively, ask if the boat heads out at 20 plus miles per hour. Ask how much bait comes with the price of the charter. Many charge fishing licenses, walk away from any idiot that says that. Ask if the boat has a radio, i know that sounds strange but many don’t as they pay the port authority a mordida or bribe to operate an illegal boat! Do they have insurance, Illegal boats of course don’t. The Navy has just taken the daily operations of Marina Vallarta over in an effort to stop these boats from operating, but that’s only with licenses to operate legally. The slow boat “syndrome” is still legal so it’s a buyer beware scenario so asking the right questions are the most important part of the negotiations. But there is little you can do if they lie to you. If the price of the boat is the only question you’re asking, think about what i just put in writing here amigo.

SHARED FISHING CHARTERS: We’re still running our hugely popular shared fishing charters 8 hr trips for $275 usd for half a beautiful Super Panga, good for two people, you’ll target Sailfish, Dorado, Rooster fish and Marlin. Just send us an email and let me know the dates you’ll be in PV and we will do our best to “Hook You Up” with others. We will do our best to match you up with others before you arrive in PV. Or if you arrive you’ll find our shop in the Marina Vallarta or on the Boardwalk to make your reservation.

TOURS: For years I’ve pretty much ignored the “tours” and left that for others. I now realize I can save clients some time and money by helping them with tour reservations so you can book fishing charters and tours all at the same time! Call Benjamin for details … from the states: 011 52 322 222 6086 at our downtown boardwalk store… or locally: (322) 222 60 86

OUR NEW LOCATION: We have vacated the other downtown location heading out to Mismaloya for our new digs on the Malicon. We’re still in Marina Vallarta as well with our new location on the Boardwalk or Malicon in spanish. You will find our great products, fishing charters and tours in both locations. My downtown store map is below and we’re open until 9 p.m. evenings.

Christmas is here and so are our shits online: Just click on the picture and it will take you to the Ebay site where we’re selling this one design! 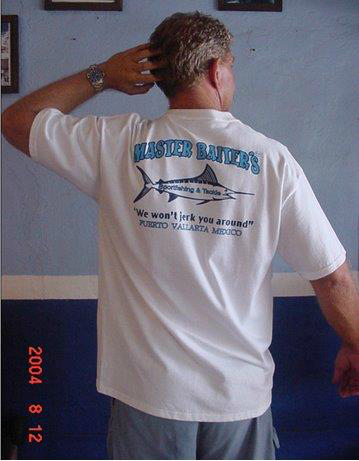