600 Pound Plus Black Marlin at Corbetena, Dorado Too

Warning; As we move into the second week of July we find every single condition both perfect and frustrating. Bait, we have tons of bait at all the fishing grounds, bait is not a problem. The water is blue, we have some really big fish out there right now which shows that even when things are about as good as they’re going to get, fishing on a world class scale is never without its challenges. For now we’re seeing very happy fish with full stomachs. That is the challenge, how do you get a world class specimen to take your bait when they’re as full as they can possibly get? Well, frankly that’s why I’m here, to share with you some small secrets that will hopefully make a difference or entertain those too far away to take advantage of the paradise I live in. An example of this is Corbetena. 35 miles out from Marina Vallarta we have Big Black Marlin starting at 600 lbs and going up from there! Blue Marlin up to 500 lbs, Sailfish swarming and Yellowfin Tuna from 50 to 100 lbs. Update 7/4/2017: Dorado moved in today and our clients boated two nice Dorado and a big Sailfish about a mile past the rock today, to my knowledge these are the first in season Dorado this year. Hopefully this will  not be a fleeting thing as we’ve had dismal Dorado fishing for the last couple of years! Now if this doesn’t get you excited Mr. Sportsman, check your pulse, you may be dead. With abundant and varied baits, perfect high visibility blue water, perfect water temperatures, it’s hard to imagine better conditions possible.  Ok, that’s the up side and there is always a down side.  Which is the bite. With so many red tuna crabs, it’s tough to get a YF Tuna to take a bait. For now it seems the late bite is after 5 p.m. So if you’re looking for Yellowfin Tuna that’s the time to be at the fishing grounds.  Marlin can have the same bite, but they’ll hit trolled baits during the day if they’re not full.  So you’ll have to work that one out amigos, Buenos suerte or Good Luck.  When it comes to El Banco I can’t tell you much this week. With Corbetena the fishing has been so good there isn’t any real reason to spend the extra money on fuel heading out farther. I do expect there would be Black and Blue Marlin as well as Sailfish in comparable sizes to what’s running around Corbetena, then again maybe not. Feel free to roll the dice, then let me know what your day was like. 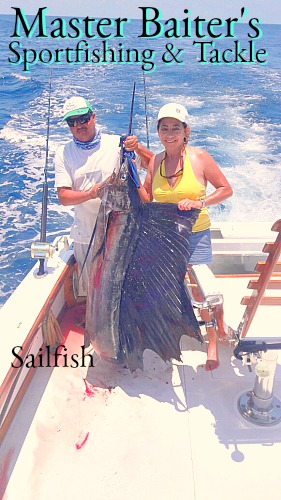 The area around the Marietta Islands is still on the slow side, not really much of a reason to hit this area for the time being. Now if you’re around the point off Punta Mita then anything is possible in this area. Sailfish are picking up in numbers as you’d expect. Marlin are out about ten miles past the point, but start looking around at the three mile mark. Dorado is starting to move into the area, but they are babies and should be thrown back! With plenty of bait in the area this is our best eight hour option.

Those looking for some fun on the water but either time or other factors are affecting your vacation, then four to six hours in the bay is just what the doctor ordered. With smaller Sailfish still in the bay around the deep channel in front of Los Arcos and baby Dorado too this area has been producing nicely for the last ten months! Jack Crevalls at 45 lbs are huge, thick in numbers and fun to catch. Bonito to 35 lbs, hell even the possibility of a Striped Marlin.  The fishing is wonderful in the bay, lots of options species wise and the expense is on the small side.  Now that we’re seeing more rain in the evenings we’ve had a Trash Line the baby Dorado’s have been feeding on. This naturally attracts larger fish so don’t ignore that strip of crap, it’s the best fish attractor there is.

When it comes to bait, it’s crazy what’s available. Rainbow runners, Goggle Eyes, Red Crabs, Flying fish, Bullet Bonito, Skip Jack Tuna and the list goes on and on. For now running a lure is still a good idea, a Petroleros or Iguana of yellow and green color is a good place to start, don’t be afraid to change color if it isn’t working amigos. Water temperatures have hung in the 81 degree mark, it’s not perfect, but close enough for the fish we play with. The bite has been a moving target.  The morning bite is all over the place, so make sure you’re where you want to be fishing early, that way you can’t miss the bite as it moves daily. The late bite is predictable, but late around 5. Plan accordingly amigos for max. Effectiveness.

Just a reminder, rain is no reason to cancel a fishing trip and deposits will not be returned on rain! Having said that the fishing is better in the rain. Those rain drops look like fish landing on the water.  This gets fish more excited that my ex-wife with a new Nordstroms credit line! Trust me, that’s “excited“! With the summer fishing season on us we all need to remember hurricanes are a part of life in this part of the world when it comes to fishing here in PV.  Many people freak out when I mention Hurricanes, but in reality we see many during the season. Very few are threats or even a “concern”. It can cause some rough seas or stormy conditions. The port authority here in PV is worse than my ex when it comes to being a safety freak. It’s a good thing, but you’ll never hit unsafe conditions because when swells hit six feet, even with super intervals, the port will be closed. So you’re fishing and boating safety is all important to us all. You’re covered, safe and informed as long as you continue to read these articles amigos, my promise to you!