Welcome to another week of Flip Flop Fishing. What does that mean? Well two weeks ago we saw the water temperatures drop to 73 degrees. As a result the Marlin, Tuna, etc took a powder. Then the water temps a week later went back up to 77 degrees and the Marlin, Tuna and Sailfish came back to the super plentiful bait in the area. Now, it´s dropped again to 74 degrees and we´re seeing the results as Marlin are sparse again, Tuna are moving out. Yet we´re seeing a slight increase in Rooster fish chasing the massive amount of Sardines around the point. On top of that I read from NOAA that we´re looking at a 60% chance that El Nino is going to turn into La Nina, the polar opposite of El Nino! Link: http://abcnews.go.com/Technology/wireStory/el-nino-weakens-la-nina-meteorologists-38399919 It´s looking like it´s going to be a while before we see ¨normal¨ fishing currents and seasons return. But this can also create opportunities in off season fishing if you find warm water. With swirling currents and radical increases / drops in water temperatures we´re in for a ¨Bumpy Ride¨ for the coming year or so.

Corbeteña: this area has turned into a big guessing game. Last week we were boating 80 to 120 lb Yellowfin Tuna, this week there isn´t a YF Tuna over forty pounds. That only happens if you find the Spinner Dolphin which Football Tuna run with. Now there are Cubera Snappers hungry for your bait and they´re in the 80 lb range!! Personally I have never seen a Cubera Snapper this large, but they´re taking baits at the Rock. Put a Skip Jack Tuna or Bullet Bonito on a down rigger set at seventy feet and get ready to sweat. Sailfish are thin in numbers but the possibility is there. Marlin have moved out for the most part if referring to Black or Blue species. Strippers seem to be on the increase as they do like the cooler water temps. Striped marlin could pick up if the water temps remain like they are. Jack Crevalls, Bonito, are no brainers, Wahoo have been a little absent, they may have moved out, I hope not. For the moment it´s not your best option for fishing. El Banco or The Bank is a little better with the number of fish, but the species out there doesn´t justify the fuel dollar expense. Cubera Snappers (as mentioned earlier) are here as well as are the ¨usual suspects¨ of Jack Crevall, Bonito, Sailfish, and Amber Jacks. You will always find fish at El Banco, but they may be the same fish at El Morro, be informed amigo, I´ll do what I can to help with that!

El Morro / Punta Mita / Marietta Islands: Last week this area had Wahoo and some Rooster fish. This week the Rooster Fish Numbers have picked up to favorable with some in the 50 to 70 lb range. Just make sure you´re using Bullet Bonito for bait and you won´t be disappointed amigo. With Sierra Mackerals, Needle fish to 40 lbs, Bonito, Jack Crevalls to 45 lbs, Snapper of all sizes, Pompano possibilities and 80 lb Amber Jacks us using a down rigger! Yes folks an eight hour trip may not be the perfect fishing trip, but it´s fairly close and very affordable. As I was writing this article I just got a phone call from Capt. Ceasar of Magnifico informing me that eight miles off the point of Punta Mita at a setting of 300 you´ll find Striped Marlin very plentiful. One boat had eight strikes from Striped Marlin alone. So it´s not bad, not really and it appears there is reason for some excitement. It´s not every day you can boat a Marlin in an eight hour day. With the conditions being so ¨flippy floppy¨ anything is possible and quite probable.

Inside the Bay: For those looking for shorter days and smaller fish we have what the doctor ordered. Near Yelapa we´re seeing Bonito in the 35 lb range, Needle fish, tasty Seirra Mackerals all over the bay. Jack Crevalls have set up house around Nuevo Vallarta to La Cruz. Sailfish are even in the bay, this week we had strikes off Los Arcos Rocks, so anything is possible, even weird stuff. Some days are better than others, fish move. For the family guy looking to treat the family to some fun on the water let me suggest a six hour trip. We can throw some snorkel equipment on the boat, you can do some fishing, let the kids do some snorkeling around Los Arcos or Yelapa and see the abundant Dolphin, Giant Bait balls, Schools of all sorts of fish, it´s a giant aquarium out there and it´s cool!

The water is High Visibility blue, Water temps are chilly but not deadly and the days are perfect with warm days, cool evenings and quick sun burns. The days are longer now so the Equator sun will take its toll on the unprepared. The Bite this week is between 9 to 10 a.m. so be where you want to be by then. With cool water temps this week will be a ¨tell¨ as to what to expect in the coming weeks. It´s about the time we 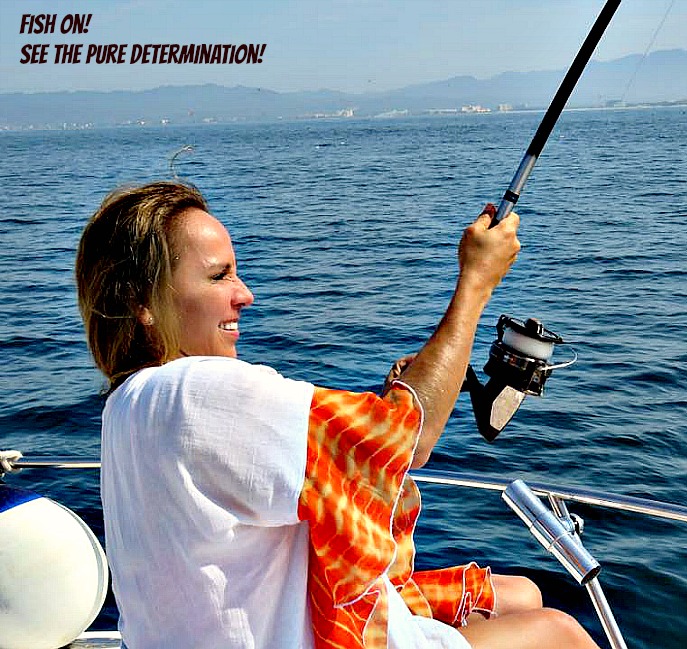 see the winter currents turn warm as the northerly flow starts. As far as lures go it’s all about live bait. But if you are running one lure like I always suggest the old reliable Petrelaros of brown, green and purple would be the first lure I´d run! For now the fishing isn´t perfect, if you´re a little flexible with your targeted species then you´ll have a great day. If you have to catch Moby Dick, then right now would not be a good time to target him, Moby that is… Ja Ja Ja (Spanish for Ha Ha Ha).

This coming week could be interesting. For me to see cold currents as we move closer to summer is unusual and won´t last long. If we continue to see chilled water temperatures, which are still above what we should be seeing, then I would expect Rooster fish numbers to increase. Especially with all the Sardines that have moved in around Punta Mita point. For those looking for Marlin, Stirped Marlin like cooler water and for some reason they will be around the point from 8 to 17 miles, just depends. Very seldom will you see Black, Blue and Striped marlin the same area if currents aren´t swirling. Just remember things can change quickly and with summer coming this can be only a chill for a short term. So be happy amigos, If you´re fish, you´re livin!

Shared boats: Yes we´re still doing the shared boat thing, if you´re interested contact us before you arrive in Puerto Vallarta so we can start working on matching you up with other people. This Special is Half a super panga, you can have two people, fishing or not for $275 usd for eight hours. This is very popular option on a semi private boat and the best fishing deal in town for those with a vacation budget. So don´t delay and don´t worry about money, we´ve got you covered! The Downtown Store on Basidillo Badillo and Insurgentes is still open as High Season ends. Call Chris (El Centro Mgr) at (044) 322 112 9558 for fishing, tours or T-shrts amigo