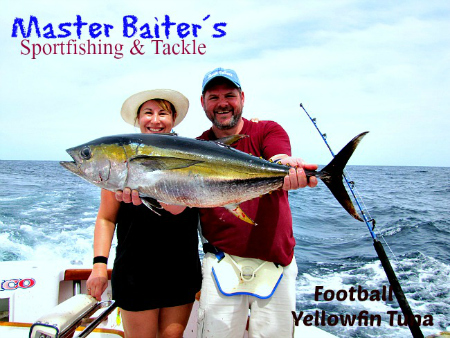 Every year I wait for the transition period between early May to early June to end as summer species like Marlin, Sailfish, Dorado and more start to filter back into the area. Right now we´re seeing Marlin of all species picking up in numbers do to abundant bait, perfect Blue Water conditions, and deserted fishing grounds. If you didn´t know Puerto Vallarta is one of the best fishing grounds for Marlin, Yellowfin Tuna and Sailfish in the world. That´s a big statement for sure, but it´s accurate. For the lucky few here in PV right now, you´ve got a wonderful opportunity to boat a world class gamefish. If you´re reading this online or in the states in a paper publication then sit back, I´ll do my best to get you off your butt and on a plane for Fish City, aka PV from now until the end of December you can get that Finned Fantasy you´ve dreamed about!

Winter species are slowly filtering out as we see summer species filling the void. If you make a triangle of sorts between the point of Punta Mita, Corbeteña and El Banco, you would have outlined the area you want to be in for fishing.  I´ve been saying this for months now, nothing has changed, just the species moving in. Water temperatures are consistent, hovering at just 80 degrees or a tad lower. 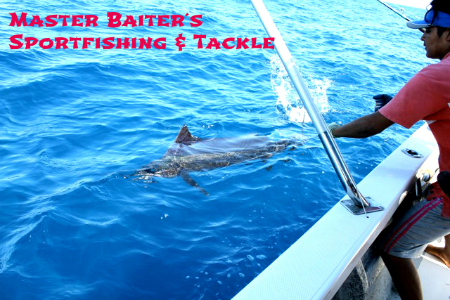 Corbeteña is still alive and well with Sailfish, Black Marlin 250 to 300 lbs, Blue Marlin 200 to 250 lbs and Striped Marlin 150 to 180 lbs. If that´s not enough there are also more Sailfish by the day running 90 lbs or so. Cubera Snappers are there for the taking over 50 lbs. Rainbow runners, Amber Jacks, Wahoo to 60 lbs, Jack Crevalls to 45 lbs, Bonito, Skip Jack Tuna boils. I mean the whole area is on fire here in Fish City! Ditto for El Banco, pick your spot and get out there, it´s just that easy. Football Yellowfin Tuna have picked up in numbers, which is perfect for this time of the year. Running in the 40 to 60 lb range they´re all around the rock, just look for the birds and make a dash to them.

The point off Punta Mita is a fish machine right now. Four miles off the point due west you´ll find Marlin in the same size ranges as Corbeteña and El Banco. Just head to the point, set a heading of 300 and keep your eyes peeled, something is going to happen. Around the corner to Sayulita you´ll also find Dorado 15 to 30 lbs if lucky, find a buoy and that will help. Rooster fish as well around Anclote in the 40 lb range. Sailfish naturally. With all the action, at some point you´ll be wondering who´s screaming louder, the first mate or the reels! Start there, keep your ears on and listen to the radio, excitement is hard to contain!

Marietta Islands and El Morrow, well they´re still doing their job as well producing Rooster fish to 45 lbs, not plentiful but people are boating them daily. Bonito to 35 lbs, Skip Jack Tuna to 12 lbs, Sierra Mackerals still lingering in the 15 lb range, some Dorado in the 20 lb range but nothing you can count on. Still a little early for Dorado, but things could change quickly, stay tuned. With 20 lb Grouper, Snappers to 30 lbs and Sailfish everywhere, it´s hard to make a call as to which fishing grounds to suggest. Anywhere from the Marietta Islands / El Morro towards Corbeteña you´ll have a nice shot at Wahoo, remember wire leaders increase your chances, that is if they´re not ¨leader¨shy. Some days they are, some days they´re not. Roll the dice, you´ll come up winners somehow.

Inside the bay, you won´t find Marlin, but Football Yellowfin tuna have been hanging around the Boardwalk area down town, no kidding. Surf fishing guys, great time to cast some iron and let the fun begin. Jack Crevalls are still around, but they´re thinning out as are the Sierra Mackerals as is normal. Skip jacks are the primary players in the bay for now. Dorado are spotty, small and frankly they´re just too small to keep. Bonito, Smaller Red Snappers for the dinner table and yes, even the possibility of a Sailfish around Los Arcos chasing Skippies or Skip Jack Tunas for a snack!

If you get the idea I´m excited, I am. We know what to look for and we´re seeing everything happen ¨right on time¨. Football Tuna at this time of the year, early June is perfect. Marlin following bait will appreciate the Bullet Bonito, Sardines and frankly there are some squids, krill variety that the Skippies have been filling themselves on. Other draw factors for now is the water temperatures, still low for my liking, I prefer it to increase slowly so we know we won´t have water temps that are too warm come August and September. Soon, a week or so from now, we´ll see the seasonal rains return with the Trash line, a fisherman’s friend for sure. You couldn´t ask for better conditions to setup a perfect fishing season!

With Water temperatures in the 79 degree range, Plenty of bait in the form of Skip jack Tuna or Bonito.  Bullet Bonito  is loved by every species, especially Rooster fish, it´s fast and abundant food for our Trophy Gamefish moving in.

Live bait is still king, but if running a lure or two let me suggest Green / Silver skirts or Petrelaros with Green, brown and purple skirts. They´re all working well. The Bite is still in the mid morning range, so be where you want to be before 9:30 with an expected bite after 10:30 for the near future.

In the interest of not turning this into a book, the season is shaping up nicely. Water temperatures are right where we want them to be. Summer Gamefish are moving in slowly, but steadily. By the end of June with some luck we could be seeing Dorado populations increasing. With the trash line Robalo will be abundant around the river mouths. Fishing High Season for PV is shaping up nicely. Keep your fingers crossed and thanks again for your continued support.