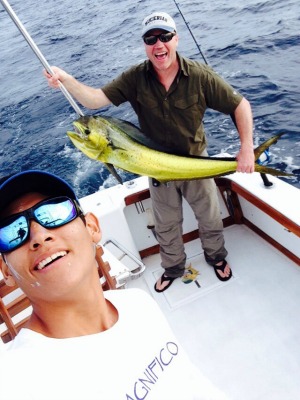 What was so promising last week at Corbeteña and El Banco tuned into a disappointment factory the last few days. With perfect conditions, perfect blue water, perfect water temperatures and plenty of bait you´d think Moby Dick would be in the area, and he is! But Moby Dick isn´t very interested in your bait or lures and this will make you crazy. The same can be said for Marlin and Sailfish as well. I´d have an easier time reading my ex-wife’s mind than figuring out these fish, but looking around the ¨area¨ there are indicators of why things have cooled off. As I suspected, when we get weird situations where we have plenty of Yellowfin tuna, yet they´re ignoring whatever you put in front of them, then something is up. It turns out the famous red crabs are back and the YF Tuna are just chowing down on these crispy critters and that explains it all.

El Banco has gone from hot to luke warm in a heartbeat.  We had a couple of weeks of great action, but with the arrival of Tunas favorite bait in the form of these red crabs, you have no shot getting their attention amigo. These crabs will float with the tides and currents using little air bladders in their systems that help them float and sink at well. They float until they decide to release the bladder air and sink to eat or just rest on the sea floor bottom. Yellowfin tuna don´t care if they´re floating or on the sea floor, they´ll take a free meal where ever they can find one. To keep things brief, YF Tuna are stuffed with these crabs and until they move out we´re going to have to deal with this condition. Marlin has been ignoring baits here for about a week now. Dorado have moved out, for now you´ll do better closer in. 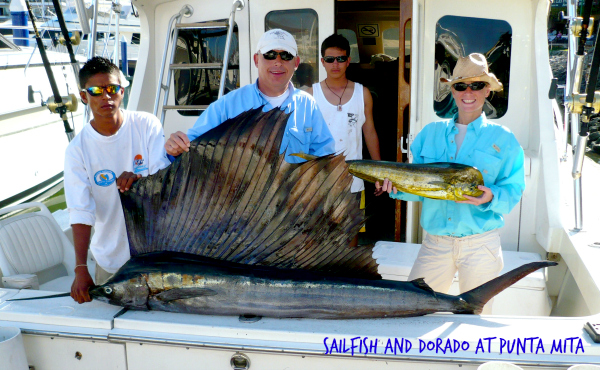 Corbeteña, well they´re pretty much the same, but at least at Corbeteña there are some Marlin taking baits, Some Sailfish to be had and like El Banco the Dorado have moved out. Out of ten boats at Corbeteña yesterday (figuratively) one boat got one Black Marlin. Cubera Snappers are taking baits that are jigged, but if you´re trolling at either of these locations you could get lucky, somebody will, but for the next ten minutes or so you´d be better closer in. Still Black Marlin in excess of 300 lbs is average, same goes for Blue Marlin. We´re seeing Striped Marlin coming in now, another indicator species of dropping water currents as they come down from Cabo. Cubera Snappers are on tap for the jiggers or bottom fishing types. If you´re in the area, give it a shot.

The Channel between the Marietta Islands and the point off Punta Mita is alive with Dorado and some, make that some Sailfish. Dorado are anywhere from half a mile to about two miles off  Punta Mita and they´re in the 35 lb range and consistent. Around Anclote there are some Rooster fish as Sardines are moving in, so we could see Rooster fish populations explode, stay tuned. At the Marietta islands we´re seeing some nice sized Snappers between 15 to 25 lbs. Skip Jack Tuna, Bonito, Jack Crevalls and the list goes on. All and all, for the same species, in the bay is better. 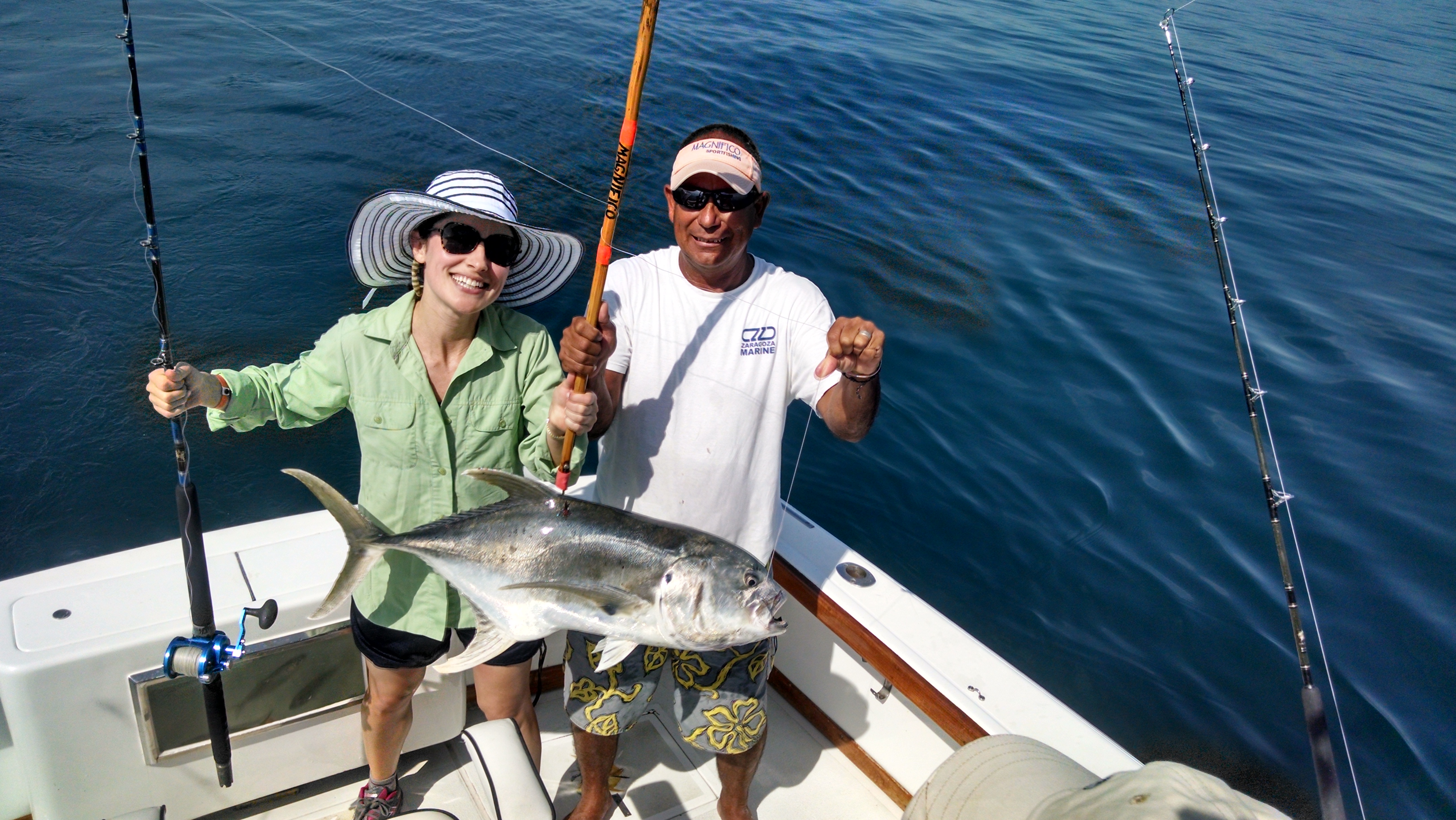 Speaking of the bay, for the moment it´s on fire! There are larger Dorado at 35 to 40 lbs in the bay than there are at Corbeteña and El Banco! Jack Crevalls at 25 to 40 lbs all over Nuevo Vallarta by the billions. Skip Jack Tuna abundant, Bonito, Sierra Mackerals to 25 lbs and even Sailfish are chasing bait into the bay, even with dropping water temperatures these warm water species are hanging out with the abundant bait. For those looking for a short day, plenty of action and an affordable day on the water, then the bay is perfect and in fact inside the bay for the moment is better than the more expensive trips to Corbeteña and El Banco. It´s not the norm, but for those in PV right now, why not take advantage of the bay. Whales are abundant also, so who knows, it could all turn into an unexpected treat to fish and whale watch at the same time. One down side about the Whales, fish are normally no were to be found around them when they´re lounging in the bay, they think they´ll be lunch so you can´t exactly blame those fish! So be a little patient, you´ll be glad you were.

Conditions and the Bite: Water temps are still around 80 degrees  (78 degrees in the bay) at the deep water locations and the Marietta Islands. Bait is plentiful, especially around Punta Mita. Bullet Bonito, Flying fish, Google eyes, you name it, even Sardines are moving into the area. For most of us when we see these sorts of conditions, we just know there´s a fish ¨just about to strike¨ and then they don´t.  With perfectly clean and clear blue water, it´s a fish paradise out there right now, we just need them to rediscover us which should be pretty darn quick (PDQ). The bite is happening right now about 11:00 a.m., make sure you check with me since this time can change, but you definitely don´t need to be an early bird for the time being. Live bait is still king, but lures running red color could be surprisingly strong. Bullet Bonito baits if you make bait are your best choice, every fish love Bullets! 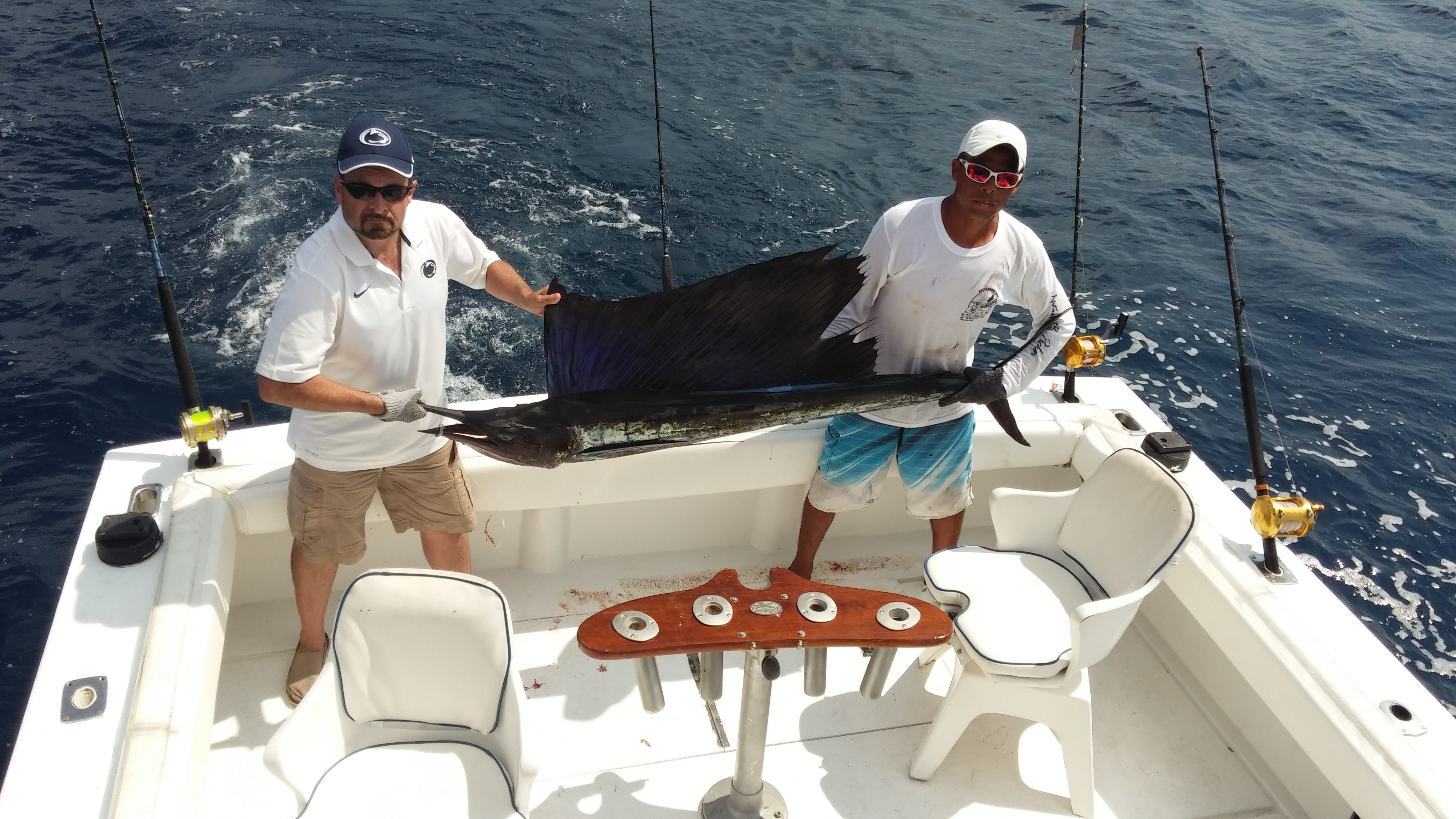 Since you´re still reading, if planning a future fishing trip to Puerto Vallarta and You want to  target our summer fish, then you´ll need to get here quick. Marlin, Dorado and Yellowfin Tuna will be moving out of the area about the second week of January, just after New Years. This is normal and is a general prediction based on years of experience and paying attention to seasonal changes. Right now we´re still in warm water but with currents changing as they do at this time of the year, the clock is ticking. We´re coming in off the back end of an El Nino and things could be a little interesting, if not strange in the coming weeks as the currents get their act back together and become the predictable creature we hope to have.

For those of you who know Marina Vallarta, the fiasco continues and the Marina Policies of charging between seventy and forty pesos per person to load / unload a boat is still in force. In case you don´t know, those fishing from Marina Vallarta are being forced to pay this fee even though the boats paying slip fees and / or own the slips have no recourse, period. It´s B.S., but there you are. If this is part of your fishing trip or day from Marina Vallarta, remember to keep the receipt they give you, which surprises me to no end they give a receipt, anyway, keep the receipt in case they try to tell you that you did not pay because you don’t have a receipt and they charge you again! It´s their compensation program to pay the employees of the Marina. FYI, keep this in mind. The Marina has many issues for sure with the new management company, but this is the one you´d be burdened with. This goes for tour boats out of Marina Vallarta as well. So now you know….

I hate to say it, but the cost of fuel in Mexico is still going up by a peso a liter, per month. This equates to an average of thirty dollars a month increase in the cost of operation for an eight hour fishing trip. Naturally the fishing community doesn´t want to increase prices on fishing since it´s already expensive and always has been. But the laws of nature and business cannot be ignored so you as a fisherman, actually a customer for any product is going up at a steady pace. Mexico has decided to build their own refineries to process the countries abundant crude oil. Right now they ship all their oil to Galveston, Texas to be refined, it´s shipped back and it´s expensive. Mexico stopped subsidizing fuel and with the new policies it doesn´t matter what the cost of oil is, it won´t stop increasing in price at the pump here in Mexico for some time to come. Naturally fuel cost drive everything up, especially fuel necessary excursions like fishing and Whale Watching to name a few. So keep this in mind for the near future, it´s a condition that will continue until further notice.

Here in Mexico we have a Consumer Protection Agency called Profeco. It´s their job to make sure you get what you paid for. They are also a govt. organization that acts as your attorney if you have been ripped off or don´t think you got what you paid for on products, services and TOURS. Have an issue or Timeshare complaints or Timeshare Pirates ripping you off, this is where you go. You can reach Profeco here at the local number: 225-0000 / 225-0018 There are English speaking people there. Regalementos are the business police and they are the people you want to call if you´ve been ripped off by seedy types you trusted. Regalementos (business police): 226-8080  . . . If for some reason you feel you´ve been ripped off or treated unfairly or got hit with a bait and switch scenario, call these fine folks and let them know what your situation is before confronting the person, if you can find them, at the location. Meet the Regalementos at the site, don’t warn them, and file charges there. You have consumer rights, the visa insures you the right not to be ripped off so don´t be afraid to call the authorities. Most companies and people in Puerto Vallarta are wonderful people, but the small percentage that lives off tourist can´t be avoided. The problem is you don´t know they´re shady until you have reason to believe so. Enough said…  this is meant as a public service message, it makes me sick to see tourist in these situations!

As always should you have any questions about Puerto Vallarta, Fishing, or anything in general pleas feel free to ask, I field many questions during the week and we´re here to support!