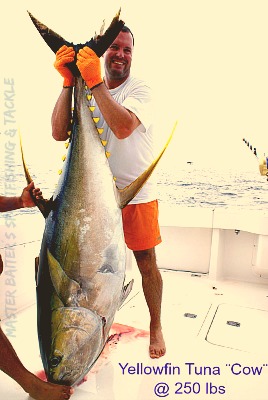 Welcome back to yet another great week of fishing here in our world class fishing grounds of Banderas Bay. We are smack in the middle of the best time of the year to realize a bucket list fantasy fishing trip. That´s right folks, we have Marlin, Sailfish, Tuna and Dorado, just pick a species, set a heading, anything is possible including the shot at a possible world record fish! As we enter the Thanksgiving holiday season we know we´re going to see thousands of first time visitors to PV catch their first Billfish, I see no reason why this can´t be you!

It´s the time of the year I love putting together ¨cookie cutter¨ fishing reports because the fishing will only get better until the end of the year. October, November and December are the best fishing months of the year as the weather turns from intense to comfortable. Water temperatures are staying in the perfect range of 84 degrees of blue, clear inviting water. If you´re a fish you´re more comfortable than my ex-wife with a new credit card at Nordstroms! While these fish may not be charging credit cards, they are charging baits.

Corbeteña this week continued to fire on all cylinders with Blue Marlin and sizeable Dorado along with Sailfish being almost ¨On Tap¨. Most of the Marlin I´ve seen this week were under 600 lbs. Not a small fish by any measure, it seems smaller Marlin are in the area, but there are some Moby Dick Sized Marlin out there, my crystal ball tells me so! Dorado in the 35 to 50 lb range. Sailfish are not exactly tournament winners, getting a little small, but they´re taking baits and we´re enjoying the fight. Please remember to release Billfish, keep what the regulations allow, but any more is abuse of Mother Nature. Cubera Snappers always there for the bottom fishing guys, Rainbow runners in the 45 lb range and a chance at Wahoo! For the moment, unless you´re looking for large Yellowfin Tuna, Corbeteña is the place to be.

Now if you´re a Yellowfin Tuna Monster Fanatic, which seem to be fewer by the day, El Banco is the where you want to be. Hovering around the high spots is the place to be as in the ¨good old days¨. Black and Blue Marlin are hanging out here as well as some big Dorado in the 50 lb range. Don´t forget the Sailfish, they´re in the area. Here´s the deal, the numbers are not as plentiful as Corbeteña, but when El Banco has fish, they´re always bigger at the bank! It´s a decision and an expense, but taking a shot at trophy sized gamefish can come up empty handed. Oh well, you can always hit Corbeteña on the flip side! Oh, I forgot to mention Yellowfin Tuna at El Banco are anywhere from 120 lbs to over 300 lbs with 200 lbs on the average, just depends on what you come across. Plenty of bait all around the area in the form of Goggle eyes, bonito, and we still have flying fish exciting the local fish population.

The Marietta Islands are showing signs of live with smaller Dorado, a stray Rooster fish or two, Bonito, Skip Jack Tuna, Jack Crevalls and some other smaller fish to choose from. Sailfish are just south and to the north at either El Morro Island or the point off Punta Mita. Same story, different week, things should get more active soon.

Bay fishing is working well at Yelapa where we´re seeing a steady supply of fun sized tuna in the 25 to 50 lb range makes me feel lucky. Sailfish are incredibly still in the bay around la Cruz, Dorado to 30 lbs and Sailfish with an attitude around La Cruz Marina area. Jack Crevalls are in the bay and they´re great action for young and kinda young alike. Bonito, Needle fish, and small Snapper around the structure makes a four to six hour fishing trip well worth its weight in lures. You may even find a stray Rooster Fish, so by any measure the bay fishing is outstanding.

The bite is a comfortable time of the day right now, so sleep in a bit. Just make sure you´re where you want to be around 9 a.m. to early afternoon, same as last week. With blue water we´re seeing live bait work well, but if you do run a lure then start with a purple or pink option, maybe mixed. There were some days last week where Dorado were only hitting lures, so don´t be afraid to mix things up and try something different! Water temps at a perfect 84 degrees and blue, smooth seas makes fishing comfortable for even the least experienced. Whales are coming in the bay strongly and it won´t be long before they´re a fishing hazard, but we love the Whales and no matter how many times you`ve seen on, they never stop impressing. Yes folks, I live in paradise and these are but a few of the reasons I will never leave Vallarta. I know I am not alone and in the end, it´s all about the life you live and not the life you worked through with no free time or adventure with your loved ones. So get out and do some living, take some pictures and then send them to a family member who needs some living in his life…..

To change gears, many of you who have been reading my scribblings will remember how I like to remind people that fishing can be very dangerous and yearly there are many, many reports of people getting speared by Marlin and Sailfish. We need to remember these fish are just stressed out to begin with, it´s their nature.  When a several hundred pound fish with a sword attached to its face that is about to be boated is the most dangerous time. When you see video of some guy with Kevlar gloves being tossed around by a fish in the water you have to be careful and even being careful isn´t good enough to stop a serious and life threatening accident. This is why it´s so important that everyone in the cockpit works as a team. This means keeping the line tight, no slack as the fish comes onboard. Stay out of the way as much as possible as  a flailing bill can slice you like butter. Below is an example of how Luis of Yolaray, a seasoned professional got sliced with a Marlin Bill like he was made of butter. 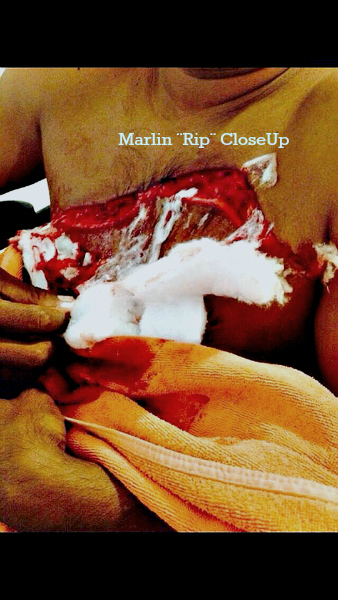 What happened here is as Luis was getting to the point where you can grab the bill with both hands, the fish whipped his tail and shot out of the water like a Marlin missile.  Luis was lucky he was on the side of the bill and not in front of the bill at the time. This knowledge comes from experience and even then he slipped up, but only slightly. The slice you see in his chest took 65 stitches and it was bleeding like Niagra Falls! Had Luis been just a little bit side-ways, he would have had a punctured lung or worse.

You also have to be careful with other fish as well, not just the Billfish. I remember not so long ago we had a client that boated a huge Dorado, close to 65 lbs.  He had his friend get in position with a camera as he stepped over this huge Dorado, squatted down for a closer picture and as he got to the bottom of the squat, the Dorado tail wapped this poor guy in the family jewels and I swear this guy turned purple!

So the moral of the story is to be alert, think before acting and remember these fish are looking at the end of their life to become your own personal ¨blue plate special¨.  Even smaller fish can present problems with hooks through hands and fingers ,  getting spiked by a gaff with a flailing fish attached, slipping and falling on lures or hooks or even secured gaffs. I´ve seen it all and it happens when you think you´ve got it all figured out, then you learn you don´t.  The bottom line here is if your boat is cheap and uninsured, it could be the most expensive boat you ever chartered! So Be safe people….

Master Baiter´s has changed locations in Marina Vallarta between docks A and B on the boardwalk. Email your Questions to me at: CatchFish@MasterBaiters.com.mx  Web page:  www.MasterBaiters.com.mx , Local Phone at: (044) 322 779 75 71 or if roaming: 011 52 1 322 779 75 71 cell phone direct Facebook: http://www.facebook.com/pages/Master-Baiters-Sportfishing-Tackle/88817121325 The trade name Master Baiter’s ® Sportfishing and Tackle is protected under trade mark law and is the sole property of Stan Gabruk.  Articles written by Stan Gabruk for the Master Baiter’s ® brand is the intellectual property of Stan Gabruk.  Any unauthorized use of these articles without authorization will result in prosecution to the full extent of the law.  I´m sorry I have to put that in the newsletter…..