Well, we´re finally here, the time of year when if you can´t catch a fish, then you don´t have a line in the water. Nothing fancy, just get there, you´ll catch fish, end of story. Now the rest of this weeks report is now redundant. Sailfish, Marlin, Tuna, Dorado, Pargo or Dog Tooth Snappers, I mean what else could you possibly want? And if that´s not enough, the fishing grounds are a deserted ghost town where you can have a finned fantasy for the taking. It´s the time when even bad captains catch fish. Jip Trips for $180 dollars roaming from Los Arcos to Marina Vallarta are catching fish. Sailfish off La Cruz, Yellowfin Tuna or Footballs abundant at Yelapa. I mean there´s the report. But of course there´s always more to say…. 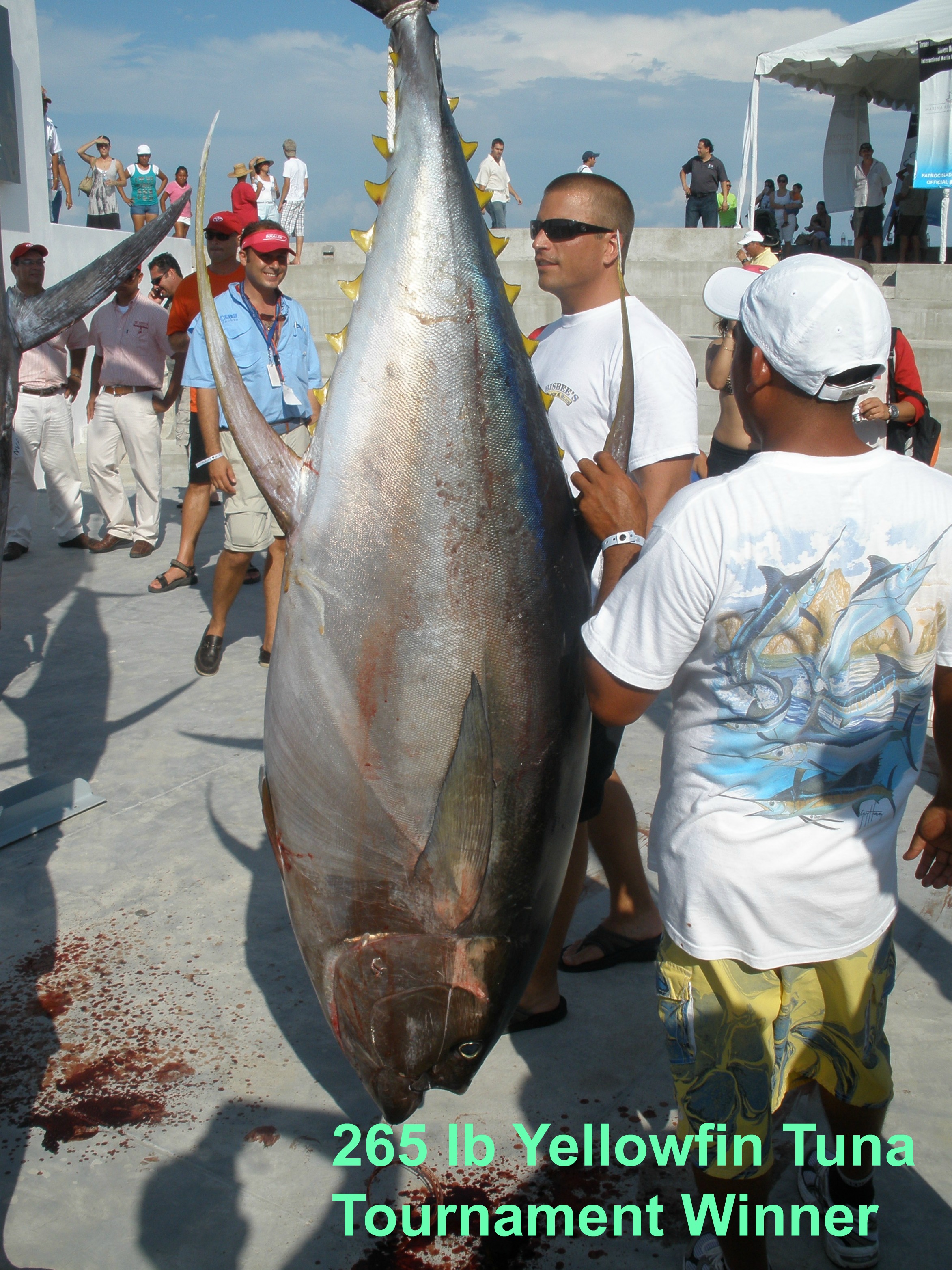 So you want to know how the fishing is, well in a word, InCreDiBle! Yellowfin Tuna still running in the 250 lb range at the usual locations of Corbeteña and El Banco. Big Black Marlin at El Banco, Blue Marlin mostly at Corbeteña. How big you ask, well if you´re not boating Black Marlin at 500 lbs, probably more,   then you´re not catching the average sized Marlin, blue or black.  Sailfish in the larger ranges are becoming more and more abundant as October brings the massive increase, hell invasion of this species. Tournament sized winners are out there now as we turn into Sailfish Central from now until the end of December!

Looking for Dorado, well no worries amigo, 40 to 65 lb Dorado are hovering around the high spots at El Banco. Corbeteña this week had smaller Dorado 45 lbs and hungry. But you can catch Dorado at the Marietta Islands at this range, so not a real reason to head to Corbeteña. Now the Cubera Snappers as mentioned are big and taking surface baits. 55 to 80 lbs, these fish hit and fight like a Sailfish at first, but then your surprised how fun these are to catch as well. Bait, it´s abundant, Sardines or Sardinas as they call them here. Bullet Bonito, Google Eyes, drawing fish of course. So conditions are still almost a carbon copy from last weeks report. Nothing last forever, so hit it when you can amigos. Those who know Puerto Vallarta (PV) and her various faces, know that this is the time for fishing crusaders, money no object, no prisoners taken, world class Sportfishing. Reputations are made and lost in this short window of time from now until late December. World record fish are here, they always are, but you have to be there to have the experience or I guess you can keep reading those magazines… 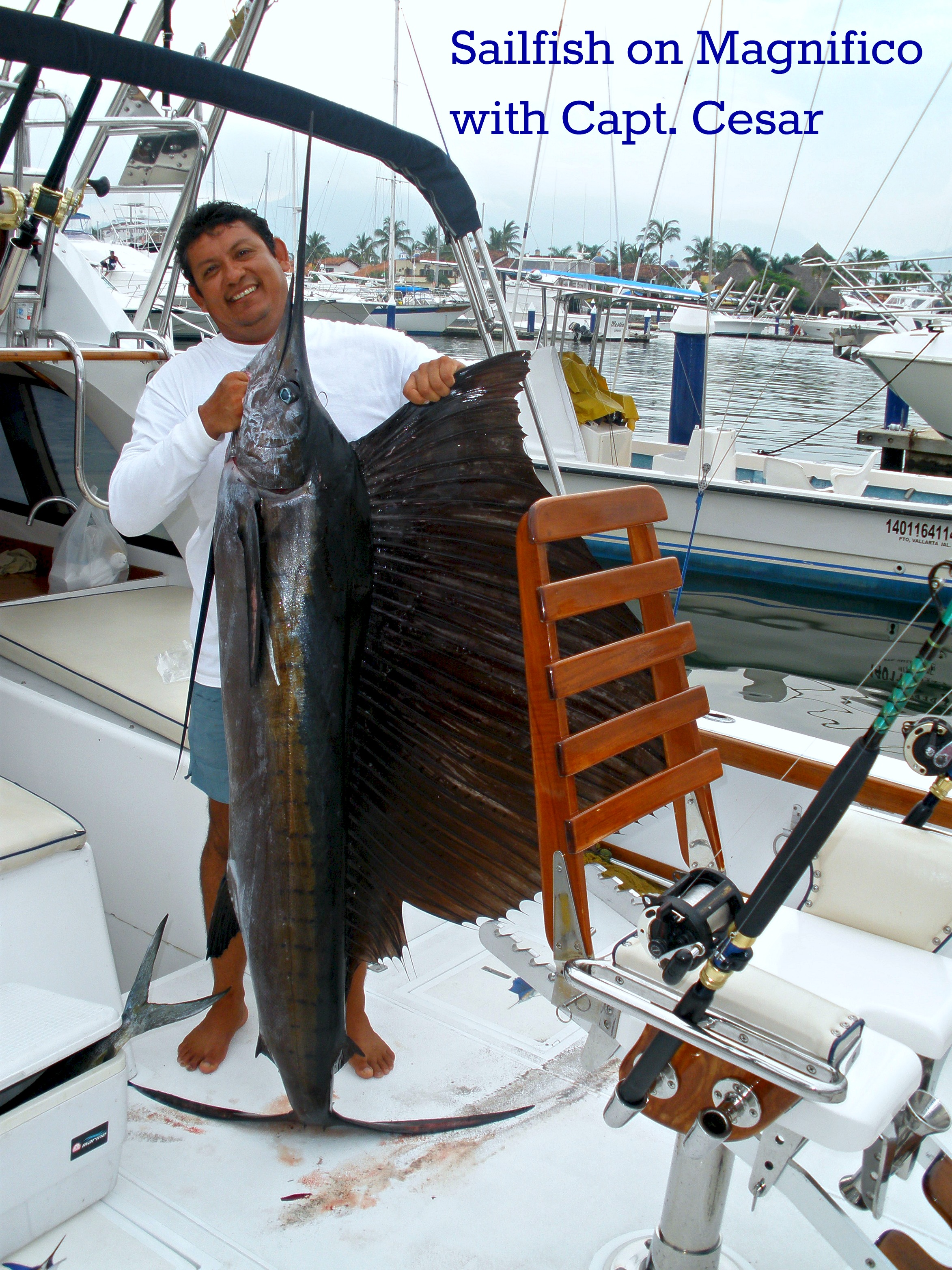 Something to be remember, water temperatures are still running in the 90 degree range, too hot for Yellowfin Tuna to hang around much. So if you´re serious about catching a ¨Cows¨ or three, you better make sure your guide and company have decent sounders where you can see the temperature breaks at depth. If you don´t have a sounder, you paid for one trust me, then just take a shot and set the Down Rigger to between 100 to 130 feet down. No action, go deeper, 150 to 170 feet down. If you do this, you´ll be fighting one of the strongest and most desired gamefish to be had. Again, this ain’t Mamby Pamby fishing. You could wind up in the record books.

Have a short days, eight hours or less, are still working like a Machine. The Marietta Islands are churning out Sailfish, Dorado to 35 lbs, Bonito, Snappers, Skip Jacks, even off season fish like Jack Crevalls are chasing Sardines practically up on the beach, hint, hint to the Surf Fishing Guys. You´ll have the time of your life.

Don´t forget the area between El Morro and Corbeteña, the golden triangle as I refer to it as. Lots and lots of Blue Marlin and Sailfish in this area. Farther out,  or rather closer to Corbeteña you´ll find Black Marlin become more abundant, it´s a hang out!

The bay is a 4 hour fisherman’s dream. Even the Jip Trips who cruise back and forth between Marina Vallarta and the islands at Los Arcos are catching their share of fish. This is summer in PV, which means there are fish everywhere and the species range is wide. Snook, the most ignored fish by game fishing enthusiast are just thick around the river mouths where the fresh water meets the salt water of the bay.

Also in the bay, off La Cruz Marina, Sailfish have set up house. Off Yelapa, at the other end of the bay are 50 pound Yellowfin Tuna Footballs. If that´s not enough, Jack Crevalls are taking over the neighborhood amigo. A winter species for sure, it´s not normal to see Jack Crevalls before early January. Weird, kinda, but we know fishing is unpredictable and challenging, but that is the whole point, isn´t it? Find the trash line, find fish, enough said. The heavy rains inland from Vallarta and the mountains have poured murky, adobe clay silt into the bay as normal. So you want to find clean and clear water. If you´re in the bay, many times the murky dark water is only a few feet thick. Running a planer will take care of problems like this… nothing to lose it you have the notion.

Just a reminder, when the moon is full, you have the early and late evening bite to contend with. For the fishing Charter Company that fixes its hours on specific times and not conditions is not a company you want to work with. Also remember as mentioned earlier, the water temperatures. Don´t just get a fixed mind-set captain and crew. The fish are where and when they want to be there not when the captain or the boat owner wants you to go fishing. Be informed, then be stern, this is your fishing trip and even if you just pay for fuel, the goal is to catch fish, not get Pancho home for dinner on time.

Right now you can have the fishing grounds from heaven to yourself as well. Hemmingway would appreciate the beauty of the situation, maybe you should as well amigo.